Liberal Leader Justin Trudeau said Thursday that he can’t be “definitive” about how many times he wore racist makeup as he sought forgiveness from Canadians for the second time in less than 24 hours.

Mr. Trudeau went further with his second apology, acknowledging the pain and hurt that he caused, as the Liberal campaign tried to grapple with the release of images of him in racist makeup dating as far back as his high-school years. Since Wednesday evening, three cases have been disclosed in which Mr. Trudeau wore brownface or blackface, revelations that sparked international attention and condemnation.

“I am wary of being definitive about this,” Mr. Trudeau said at a Winnipeg media conference, when asked how many times he had done this. He said his hesitance stems from not remembering one of the cases already reported.

The two photos and a video date from the 1980s to 2001. On Wednesday, he said he had only painted his face twice. But then Global News published the video of him from the 1990s Thursday morning.

Mr. Trudeau suggested he doesn’t remember because he didn’t realize the significance of brownface and blackface.

“The fact is that I didn’t understand how hurtful this is to people who live with discrimination every single day. I have always acknowledged that I come from a place of privilege but I now need to acknowledge that that comes with a massive blind spot.”

He said his “layers of privilege” as a wealthy white man meant that he didn’t see the racism behind his actions and ”for that I am deeply sorry and I apologize.”

“It was blackface and that is just not right,” Mr. Trudeau said, for the first time using the term.

The 2001 photo, released by Time magazine Wednesday shows Mr. Trudeau dressed up as Aladdin, in a turban and robes and with his face, neck and hands painted brown. He was 29 at the time and a teacher at a private school that held an Arabian Nights-themed gala event where he was pictured.

On Wednesday, Mr. Trudeau told reporters that in 2001 he didn’t realize wearing blackface or brownface was racist. “Now we know better,” he said, suggesting he wasn’t alone in his lack of awareness.

The practice though has been sharply criticized for decades.

Asked Thursday when he learned that the practice was racist, Mr. Trudeau didn’t directly answer the question, but referenced his experience as an MP, which began in 2008.

“I’ve learned every day that it’s unacceptable to engage in this sort of behaviour,” he said.

Sunny Khurana, who attended the gala as a parent of students at the private school, said he didn’t feel offended by Mr. Trudeau wearing racist makeup at the fundraiser and even posed for a photo with Mr. Trudeau and another turbaned Sikh.

“We never felt he was trying to look down on anybody or he was demeaning to anybody. It never came across like that,” he said in an interview Thursday.

He added that many people were dressed up at the costume party.

“It’s not really something to be mean or to hurt anybody. It’s more of a party.”

Mr. Khurana said people handed out that picture to media during the election campaign “for a reason.”

“People are going try to use that to their advantage.”

Mr. Trudeau also admitted Wednesday to wearing blackface at a high-school event in the 1980s. The photo obtained by The Globe and Mail shows him also wearing an Afro wig. He also appears in blackface in a video posted by Global News that the Liberal Party said is from the early 1990s.

Mr. Trudeau said he didn’t disclose the incidents when he was vetted as a Liberal candidate or leadership contestant because ”it was really embarrassing.”

The images of Mr. Trudeau in brownface and blackface hit headlines around the world and ignited an intense political firestorm with less than five weeks before the Oct. 21 election. So far the polls have shown the Liberals and Conservatives locked in a fierce two-way race.

The latest numbers from Nanos Research show that the Conservatives have inched ahead sit at 38 per cent while the Liberals are at 35 per cent. The New Democrats, meanwhile, are at 12 per cent, the Greens 8 per cent, the Bloc Québécois 4 per cent and the People’s Party of Canada 3 per cent.

The poll was sponsored by The Globe and Mail and CTV, with a total of 1,200 Canadians surveyed from Sept. 16 to 18. It has a margin of error of 2.8 percentage points, 19 times out of 20. Respondents were asked: “If a federal election were held today, could you please rank your top two current local voting preferences?” A report on the results, questions and methodology for this and all surveys can be found at http://tgam.ca/election-polls.

The pictures are a self-inflicted wound that can “only undermine Justin Trudeau’s personal brand,” Pollster Nik Nanos said Thursday. However, he said it’s too soon to say whether that will translate into less support for the Liberals, because it’s possible progressive voters will stick with the party if it looks like the Conservatives will win.

How voters react will likely break down along generational lines, Shachi Kurl, the executive director of the Angus Reid Institute said in an interview. Voters over 50 years of age will care much less than voters under 35, she said.

That distinction increases the risks for Mr. Trudeau because it’s those exact people that the Liberal Leader needs to “lock down,” Ms. Kurl said. Young voters gave the Liberals their victory in 2015 and she said the revelations mean more of them could drift to the NDP and Greens or simply stay home, which would benefit Conservative Leader Andrew Scheer.

This is potentially devastating to Trudeau because it hits at an issue that that progressive young vote would not find any other way to see except for as profoundly wrong and profoundly unacceptable,” Ms. Kurl said.

Speaking in Windsor, Ont., on Thursday, NDP Leader Jagmeet Singh said he is concerned that the pictures represent an “ongoing pattern of behaviour” for Mr. Trudeau, adding that it is painful for many people to see the images.

“I think he’s got a lot to answer for,” Mr. Singh said. The pictures raise questions about who the real Mr. Trudeau is, he said.

He did not answer a question over whether he would shake Mr. Trudeau’s hand at the coming leadership debate in October.

“It’s a difficult thing to think about,” he said. “How do you respond to somebody, how do you look somebody in the eye that has mocked the lived reality that I’ve lived but more importantly that so many Canadians have lived?”

In Saint-Hyacinthe, Que., Mr. Scheer said Canadians might have been able to accept Mr. Trudeau’s apology if he had been more truthful.

Mr. Scheer said a concerned individual flagged the video to the Conservative campaign and the Tories then turned it over to a “responsible media outlet” for verification. But he did not say how long his campaign had the video before giving it to Global News.

When asked if he had ever dressed in an offensive way, Mr. Scheer said “no.” He later said that he’s not perfect, but he has not done anything “like this at all … nothing that would rise to this level.”

Liberal sources said the controversy has hurt morale on the campaign, which had been high until now. The Globe is keeping the sources’ names confidential because they were not authorized to speak about internal issues.

One source said the party did not have an adequate strategy to deal with the fallout of the blackface controversy.

Mr. Trudeau was warmly welcomed at the local businesses he visited in Winnipeg Thursday. He was not confronted about the images by passersby as he toured around the city’s downtown. In the crowd at his press conference, two men held signs reading “Justin Trudeau is not racist,” while people broke out into scattered applause to some of Mr. Trudeau’s answers.

At a campaign event in Ottawa, Liberal candidate Greg Fergus, who has chaired an all-party black caucus of parliamentarians, said he spoke directly with Mr. Trudeau Wednesday evening and accepts his public apology.

“He gave me a call and we had a really good conversation about this,” Mr. Fergus told reporters.

“It’s going to be rough,” he said. “People are feeling hurt.”

There was a lot of confusion and hurt last night by the black community, he added. “I will say this to all of you: I don’t believe that anybody has ever lived their lives without making an error, or without making errors.”

Mr. Fergus said that Mr. Trudeau has demonstrated support for the black community in a number of ways, such as the inclusion of black civil-rights activist Viola Desmond on the Canadian $10 bill; Canada’s support of the United Nations’ International Decade for People of African Descent; being the first prime minister to formally acknowledge recognize the existence of anti-black racism; having a diverse cabinet and caucus and including budget measures to support the black community.

“I think those are really the measure of the man and that’s the reason why I have confidence in his continuing leadership,” he said.

With reports from Bill Curry, Janice Dickson and Xiao Xu

Opinion
The offence was not just Trudeau’s makeup, but also the silence Subscriber content
September 19, 2019 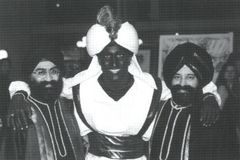 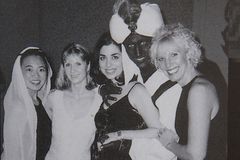 Follow Marieke Walsh, Michelle Carbert and Kristy Kirkup on Twitter @mariekewalsh @michellecarbert @kkirkup
Report an error Editorial code of conduct
Due to technical reasons, we have temporarily removed commenting from our articles. We hope to have this fixed soon. Thank you for your patience. If you are looking to give feedback on our new site, please send it along to feedback@globeandmail.com. If you want to write a letter to the editor, please forward to letters@globeandmail.com.
Comments