Finance Minister Chrystia Freeland told Liberal Party members Thursday night that the time has come for the federal government to bolster the child care system and focus on putting in place a long-lasting system.

With just over one week to go before Ms. Freeland tables her first budget, she ramped up the expectations for her party to finish the work on child care started under former prime minister Paul Martin.

“Now is the moment that Canada needs to get this done; that we need to build for the women of today and the parents of today. And sorry guys, for just mentioning women in particular, but sadly the reality is, mothers still bear more of the burden,” Ms. Freeland told the virtual convention at its opening night.

The Finance Minister was joined virtually by Ken Dryden, who in 2004 was asked to implement a national child care program. Those plans were cancelled when Stephen Harper took office in 2006. The policy has been taken up by Ms. Freeland who, since becoming Finance Minister last year, has made it a priority for the Liberal government.

“It has been heartbreaking for me that we weren’t able to just fully go all the way then,” Ms. Freeland said about Mr. Dryden’s work in the Martin government. She said the focus now should be on “building a system that lasts” rather than a program that can more easily be cancelled.

Despite the myriad issues that the April 19 budget is expected to tackle, including a stimulus package worth up to $100-billion, the COVID-19 pandemic and climate change, Ms. Freeland focused almost the entirety of her 30-minute conversation on child care.

“I really believe COVID has created a window of political opportunity and maybe an epiphany, as you put it, on the importance of early learning and child care,” Ms. Freeland said Thursday. Her November economic update promised to “lay the groundwork for a Canada-wide child care system.”

Ms. Freeland and her cabinet colleagues Steven Guilbeault and Ahmed Hussen were the keynote speakers at the first of a three-day event billed as an opportunity to prepare the party for a potential federal election. Ms. Freeland was originally scheduled to appear alongside Mr. Martin but the party said he cancelled, because of an “unforeseen personal commitment.”

While Prime Minister Justin Trudeau has repeatedly said he doesn’t want an election, a campaign is the focus for the Liberal convention. On the program for Friday and Saturday are workshops with advice on human resources for campaigns, training on being a Liberal candidate, tips for navigating tight races and panels on digital campaigning and fundraising. Most of the election readiness panels are not for the public and media and only for delegates who have paid to attend.

“We don’t know when the next election is going to be, but it’s coming, and this convention is our chance to get ready,” party president Suzanne Cowan said in opening remarks from her home in Toronto.

The Liberals only need the support of one of the three main opposition parties to continue governing and NDP Leader Jagmeet Singh has said his party will vote with the government on confidence votes and he “will not trigger an election while we are fighting this pandemic.” The Prime Minister has not made the same commitment but maintains a campaign is not his focus.

The Prime Minister will address the convention on Saturday, the same day party members will vote on a series of policy proposals that, if approved, will be sent to the platform committee for consideration. The proposals include implementing a “Green New Deal” to achieve a range of environmental objectives, studying a universal basic income and creating a carbon-neutral high-speed commuter rail network across the country.

In their Thursday speeches, Mr. Guilbeault and Mr. Hussen highlighted their government’s work during the pandemic. Mr. Hussen, the Families Minister, noted the financial support programs that the Liberals created during the COVID-19 pandemic, including emergency income support and an increase to the Canada Child Benefit.

Mr. Guilbeault, a well-known environmental activist before his 2019 election, spoke about the Liberals’ work to address climate change and teed up two new bills targeted at social media companies, such as Facebook and Twitter, that he will introduce this year under his role as Heritage Minister.

One, which he said will be tabled in a few weeks, is a new legal requirement for social-media companies to remove harmful content, such as hate speech or images of child exploitation. The second is a law requiring large social-media platforms, such as Facebook, to contribute to the Canadian news industry. 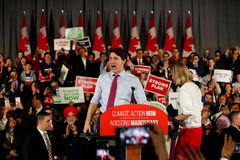 Opinion
Canada’s politicians have been uninspiring with their pandemic response, not awful
Subscriber content
April 8, 2021