Canada’s oil-producing provinces are calling for a shakeup in the federal equalization program after the latest figures revealed Quebec’s share of the $19.8-billion program will climb to two thirds as of next year.

Quebec gets the boost partly because the total cost of the program increases in line with economic growth, and Ontario will no longer qualify next year, leaving Quebec with a bigger share of the federal transfer program.

Next year’s $13.1-billion payment to Quebec – a $1.4-billion increase – will represent 66 per cent of the total equalization program, up from 61.9 per cent when Ontario was still on the receiving end of the federal program, which is intended to help poorer provinces provide similar levels of government services to those found in the rest of the country.

The federal Finance Department released the details of next year’s transfer amounts on Sunday evening, just before federal Finance Minister Bill Morneau played host to his provincial and territorial counterparts for dinner in Ottawa. Those meetings concluded on Monday afternoon.

In an interview with The Globe and Mail, Saskatchewan Premier Scott Moe said the results of the current formula are “problematic” and underscore his call for change, which he will bring to the federal government.

“I don’t think equalization was ever a program that was meant to disburse 66 per cent of its proceeds to one province," he said.

While the results of the current equalization formula are not sitting well with those provinces, Quebec Premier François Legault caused further irritation last week when he defended Quebec’s opposition to the proposed Energy East pipeline that would bring Western Canadian crude through his province for refining in Atlantic Canada.

“I’m not ashamed at all of refusing dirty energy while we’re offering clean energy at a very competitive price,” Mr. Legault said.

When asked about the Quebec Premier’s remarks, Mr. Ceci told reporters: “He clearly doesn’t understand what is happening in the energy sector in Alberta at this point in time."

“It’s that very energy product – which is sustainable, I might add, among the most sustainable in the world ... that is allowing for equalization in its current form to even exist," Mr. Moe said. “So as Canadians, if we support the sharing of our wealth, then we also need to support, together as Canadians, the advancement and the expansion of that wealth.”

In a budget bill this year, Mr. Morneau renewed for another five years the formula used to calculate how the funds are allocated, even though some provinces had been calling for significant changes. He stood by that decision on Monday as he responded to critics of the program.

“Moving on equalization may well be a possibility at the next time we renew it, which will be in four years," he said. Mr. Morneau said there are other programs to help provinces facing short-term challenges, and that equalization is not meant to address such situations. “The way it was intended to work was to ensure that Canadians who move from one province to another can get a roughly equal level of services in different parts of the country.”

The equalization program launched in 1957 and was enshrined in the Constitution in 1982. It is based on calculating a national average of fiscal capacity – essentially the ability of governments to raise revenue – and then compensating provinces that fall below that average.

However, the details of how that average is calculated are a subject of perpetual dispute, especially over whether to include revenue from natural resources and to what degree. Eligible provinces currently receive a payment based on either including 50 per cent of natural resource revenue or exempting them entirely, whichever produces a higher payment. The program had previously included all natural resources revenue. Alberta’s opposition leader, Jason Kenney, has called for natural resource revenue to be removed from the formula, and on Monday repeated his call for a provincial referendum on equalization.

Although the payments are an allocation of federal tax revenue, Alberta politicians have complained that their province contributes disproportionately to equalization.

A report this year by the Parliamentary Budget Officer that examined options for reform found that neither a full inclusion nor a full exemption of natural resource revenue would make Alberta an equalization recipient.

Quebec Finance Minister Éric Girard said he wants to bring Quebec’s fiscal capacity closer to the national average, which would reduce its share of equalization. However, he also said the fact that Albertans head to the polls in May could be injecting more emotion than necessary into the debate about Quebec’s share.

“The fact that Alberta will be in an election may be raising the volume on the equalization payments,” he said. 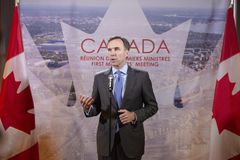 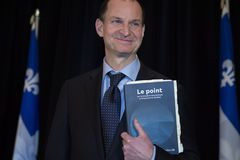 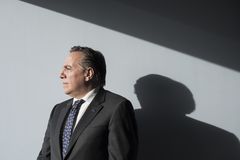