Ontario Premier Doug Ford’s government says it will send the federal government a $200-million bill to cover the costs of resettling thousands of asylum seekers who illegally cross the Canada-U.S. border.

In the latest escalation of tensions between the province and the federal Liberals, Ontario Community and Social Services Minister Lisa MacLeod said she will send a letter to Ottawa itemizing the costs of the border crossers. She said the $11-million Ottawa set aside to help Toronto deal with the added costs is a far cry from the $74-million tab the city will rack up this year in shelter costs for asylum seekers.

“What I’m simply asking is that they pay their bills,” Ms. MacLeod said on Tuesday after an emergency meeting of the House of Commons immigration committee in Ottawa. “I would love a cheque.”

Immigration Minister Ahmed Hussen said the federal government had not received a request for funding as of Tuesday evening. He underlined the government’s interest in continuing to work with Ontario, despite its decision earlier this month to withdraw the province’s support for the resettlement of asylum seekers who cross the border illegally.

“We will be, of course, ready to continue to provide financial and other supports to provinces moving forward, but we would need to work with them to figure out what those costs are and to also make sure that they’re doing their part,” Mr. Hussen said after the committee meeting.

Border Security Minister Bill Blair told the committee that 800 asylum seekers will be moved from college dormitories in Toronto to hotels in the Greater Toronto Area by Aug. 9 to make room for the arrival of students.

“I’m aware that plans have already been made to move those individuals into quite appropriate housing in hotels around the GTA,” Mr. Blair told the committee.

Mr. Hussen later told CBC’s Power and Politics that the hotels are in fact for 540 people, who are expected to be there for two months and then transition to more permanent housing.

Mr. Blair, who visited the main unofficial border crossing at Lacolle, Que., on Monday, told the committee that front-line law enforcement and border services personnel are performing their duties in a professional and “highly effective” manner.

“What I observed was the exact opposite of chaos. It was exceptionally orderly and well-planned,” he said.

The session, which lasted more than six hours, featured nearly two dozen witnesses, including Public Safety Minister Ralph Goodale, who told reporters afterward that he and Mr. Hussen have spoken with U.S. officials to request a review of the Safe Third Country Agreement with the United States.

That agreement requires both countries to refuse entry to asylum seekers who arrive at official border crossings, because each country is considered safe for refugees. However, since the agreement applies only at official ports of entry, asylum seekers can avoid being turned away by crossing between border posts.

“It needs to be revisited to determine if it’s meeting the needs of both countries moving in both directions. And we are waiting for the Americans to indicate whether or not they’re prepared to have that conversation,” Mr. Goodale said.

He shot down a Conservative proposal to declare the entire 9,000-kilometre border an official port of entry, suggesting it would be impractical for both countries to staff it.

“You need to have corresponding co-operation from the United States on the other side of the border, which they are, I think it’s fair to say, not likely to do,” Mr. Goodale told the committee, although he admitted he has not formally asked.

“Frankly, the United States, in my view, is not a safe country for asylum seekers. And hence, there is a huge influx coming through,” she said during the meeting.

Conservative immigration critic Michelle Rempel said the Liberals failed to present a “sustainable, long-term plan” for the border crossers at the meeting Tuesday.

“What they have done is normalize the status quo. They’ve refused to take a position on the Safe Third Country Agreement and they haven’t put in place any sort of planning or support for what amounts to a major immigration change,” Ms. Rempel said.

“We spent $22,000 on a committee study today and resulted in zero answers. It was embarrassing.”

Human smuggling getting sophisticated on U.S. border with Canada
July 24, 2018 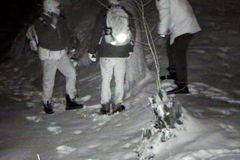 Follow Michelle Carbert and Laura Stone on Twitter @michellecarbert @l_stone
Report an error Editorial code of conduct
Due to technical reasons, we have temporarily removed commenting from our articles. We hope to have this fixed soon. Thank you for your patience. If you are looking to give feedback on our new site, please send it along to feedback@globeandmail.com. If you want to write a letter to the editor, please forward to letters@globeandmail.com.
Comments