The Ontario government is urging Ottawa to require mandatory predeparture COVID-19 testing for domestic air travellers entering the province to contain the spread of variants.

The Ford government also wants the federal government to ban non-Canadians from entering the country from hot spots such as India.

Health Minister Christine Elliott and Solicitor-General Sylvia Jones wrote to their federal counterparts Tuesday to express concerns about variants that are driving a deadly third wave in Ontario.

“These variants entered through our borders, both international and domestic, and it is critical that every effort is made to keep them out,” they wrote to Public Safety Minister Bill Blair and Health Minister Patty Hajdu. “We are asking that you implement mandatory predeparture PCR testing for all domestic air travellers entering Ontario.”

Currently, interprovincial air travellers do not need to provide a negative PCR test, although people travelling internationally are required to show a negative COVID-19 test taken within 72 hours of boarding flights.

Some provinces have implemented their own rules to limit the import of cases from other regions of Canada. For example, New Brunswick last week imposed hotel isolation rules for domestic travellers and Nova Scotia closed its borders to non-essential travellers except those from Prince Edward Island and Newfoundland and Labrador. PEI requires everyone entering the province to self-isolate for 14 days. Those rules are much stricter than in Ontario, where the province recommends domestic travellers self-isolate upon arrival, but it is not required.

Mr. Blair’s and Ms. Hajdu’s offices did not provide comment to The Globe and Mail on Tuesday. Instead, the Health Minister’s office directed The Globe to comments made earlier Tuesday by Intergovernmental Affairs Minister Dominic LeBlanc, who said the government is open to provincial suggestions on domestic flights.

Transport Minister Omar Alghabra is examining “what we can do in terms of increased surveillance at airports, but it will be a partnership with the government of Ontario,” Mr. LeBlanc said. “We are always there to discourage people from travelling or leaving their homes for non-essential reasons.”

Ontario is asking that stricter predeparture measures remain in effect until the risk of new variants has been effectively minimized.

In the past two weeks, there have been 17 domestic flights into Toronto Pearson International Airport that could have carried people with possible COVID-19, the ministers said.

The third wave surging across Canada is driven by variants of concern that were first identified in Britain, Brazil, India and South Africa before they were recorded in Canada. The federal government has come under intense criticism for only implementing stricter border measures months after the first variants were identified and after they were found in Canada. Experts say the new rules Prime Minister Justin Trudeau’s government imposed in February also aren’t strong enough.

For example, the mandatory hotel quarantine for international air travellers to Canada is three days, compared with the 14-day requirement in New Zealand and Australia.

Ontario associate small-business minister Prabmeet Sarkaria told The Globe on Tuesday that Ontario wants to stop people travelling into the country from hot spots if they are not Canadian citizens or permanent residents.

“We need to regulate travellers and not flights,” he said. “We don’t think a ban on direct flights is workable because there are loopholes. You can take a connecting flight to Ontario so that doesn’t serve the purpose of protecting Ontarians.”

The federal Health Minister maintains that only 1.8 per cent of travellers are found to be positive with COVID-19.

Two senior advisers to Premier Doug Ford said the government had examined ways to shut down Pearson airport over fears of the spread of the B.1617 variant that originated from India. They looked at using health and safety standards regulations, but that option was rejected as unworkable since airports fall under federal jurisdiction, the advisers said. The Globe is not identifying the advisers, as they were not allowed to discuss cabinet deliberations.

Ontario would also like to see stricter measures at land borders because of reports of people flying into the U.S. and crossing the border into Canada by taxi or limousine. 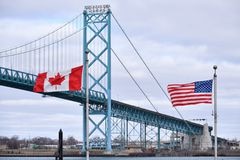 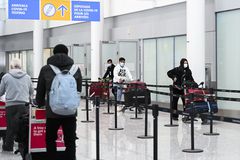 Can snowbirds drive home to avoid a hotel quarantine?
April 18, 2021