Conservative Leader Erin O’Toole promised free votes for his MPs Wednesday on two pieces of legislation that are a source of tension within the party.

Both have been put on the agenda early by Justice Minister David Lametti: One bill would ban coercive conversion therapy for LGBTQ people and the other would expand access to medical aid in dying.

The Liberals have not said whether they will force their caucus to vote in favour of either or both. The NDP suggested Wednesday that while they back the conversion therapy bill, they’ve not decided on the expansion of medical assistance in dying.

Leader Jagmeet Singh cautioned that he wants to make sure the bill doesn’t fall short of providing necessary access.

“We don’t know, in terms of the legislation, if it will go where it needs to go, but the principle is we believe everyone should have access to this important right,” he said.

For Mr. O’Toole, however, figuring out where his caucus will go is also a matter of balancing political priorities.

The strength of the party’s socially conservative wing was evident in the recent leadership race.

Two of the four candidates on the ballot – current MP Derek Sloan and Toronto lawyer Leslyn Lewis – ran with the backing of well-organized and well-funded anti-abortion groups.

Mr. O’Toole, while saying he supports a woman’s right to choose to end a pregnancy, also courted their support. He won on the third ballot after both Mr. Sloan’s and Ms. Lewis’s supporters largely came to him.

When asked Wednesday if the votes on the two bills would be free, Mr. O’Toole’s answer was simple: “Yes, they will.”

But Mr. O’Toole must also find a way to fight the Liberals' allegations – repeated again in the Commons Wednesday – that social conservatives are driving his party’s agenda. During the leadership race, Mr. Sloan and Ms. Lewis were critical of the ban on coerced conversion therapy, a widely condemned and discredited practice aimed at forcing someone to change their sexual orientation or gender identity.

They’ve alleged it would criminalize mere conversations between parents and children.

The Liberals say the bill does no such thing. But even Mr. O’Toole has picked up on that thread, making the same allegation in his response to the bill last week.

“Conversion therapy should be banned to protect young people who identify as LGBTQ+. I want everyone to feel accepted in our society,” he said.

“Let us do this in the right way and make sure their support networks are not jeopardized in the process. We will be seeking reasonable amendments to try to get to yes on this.”

The Tories also appear to be stuck on how fast they’ll get to a yes on a bill that’s coming from one of their own.

Last week, the Liberals also reintroduced a bill that would mandate training for judges to improve their handling of sexual assault cases.

The legislation was first put forward by Rona Ambrose, when she was interim leader of the Conservative party in 2017.

It passed the Commons then but was held up in the Senate and failed to pass before the 2019 election.

When it was brought back last week, the Conservatives denied unanimous consent to send the bill directly to the stage of legislative process it was at before. Some also appeared to raise concerns that not enough consultation had been done.

On Wednesday, Conservative House leader Gerard Deltell said the bill on expanding access to medical aid in dying deserves a full airing in the Commons.

“It’s because of the seriousness of this bill that we want to let our people express themselves,” he said.

Neither Mr. Deltell nor Mr. O’Toole supported the first piece of legislation allowing assisted dying in 2016, which was a free vote for all MPs.

The new one cannot and should not be dealt with in a partisan way, Mr. Deltell said.

“There is no good or bad position,” he said.

“We have to address it seriously, correctly and with respect.”

Meanwhile, the Conservatives are beginning to plot their own parliamentary strategy in earnest. The threat of an immediate election vaporized when the minority Liberals' throne speech was supported in a vote by the NDP, so all the parties are focused on what they can achieve in the House of Commons.

The next agenda item for the Tories: how to push forward on the WE Charity scandal with parliamentary committees set to reconvene beginning later this week.

Several had been digging into the affair but their work halted when Prime Minister Justin Trudeau prorogued Parliament in August.

The New Democrats want a new stand-alone committee to start probing a decision to have WE Charity run a COVID-19-related student grant program, as well as other big ticket COVID-19 policies.

Conservative ethics critic Michael Barrett said Wednesday his party will study the New Democrats' idea, but certainly do not intend to let the matter go.

“We fully expect to pick up our investigations where we left off,” he said.

“The cover-up prorogation is not going to be where we leave this issue.” 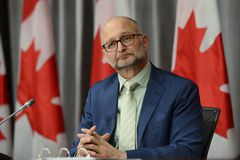