The federal government is cancelling 29 permits for exports of military goods to Turkey, saying an investigation revealed that made-in-Canada airstrike-targeting gear shipped to the Eurasian country was illegally diverted to the war between Azerbaijan and Armenia.

It’s rare for Ottawa to cancel permits outright and the decision could hurt Canadian relations with Turkey, a NATO ally.

A Global Affairs report released Monday said there was “credible evidence” that Turkish Bayraktar TB2 drones with Canadian targeting gear were used in a conflict between Armenia and Azerbaijan, a staunch ally of Turkey’s, over the disputed territory of Nagorno-Karabakh. Long-simmering tensions exploded last fall with six weeks of heavy fighting, which claimed more than 5,000 lives.

The same report said there was similarly credible evidence that Turkish drones with Canadian gear were also diverted to Turkey’s military operations in Syria.

Military drones played a major role in the Nagorno-Karabakh war and, as The Globe and Mail reported last October, restricted Canadian imaging technology made by L3Harris Wescam turned up in drones being operated by Azerbaijan. The gear from Wescam, based in Burlington, Ont., had been authorized for export to Turkey only.

“Following this review, which found credible evidence that Canadian technology exported to Turkey was used in Nagorno-Karabakh, today I am announcing the cancellation of permits that were suspended in the fall of 2020,” Mr. Garneau said in a statement. “This use was not consistent with Canadian foreign policy, nor end-use assurances given by Turkey.”

Canada is obliged under domestic law and the global Arms Trade Treaty to prevent, detect and stop the diversion of military goods to users other than intended customers. It is also compelled to stop exports of such restricted goods that are shown to be used to harm civilians.

The Global Affairs report also said there is credible evidence Turkey supplied Bayraktar TB2 drones to the Libyan government but the proof is “insufficiently credible” to confirm whether these machines were equipped with Canadian sensors. It said it’s “most likely” Canadian equipment because the Wescam gear is the “advertised sensor package for the TB2″ model.

But the report said the Turkish company that took delivery of the Wescam gear, Baykar, cannot be held liable for what Turkey’s military did with the drones. “Baykar cannot be held accountable for the actions of the Turkish government in relation to Nagorno-Karabakh, Syria, Libya or elsewhere.”

Mr. Garneau also revealed he’d spoken to his Turkish counterpart, Foreign Affairs Minister Mevlut Cavusoglu, Monday morning to give him a head’s up and begin the process of rebuilding relations.

“Turkey is an important NATO ally and applications related to NATO co-operation programs will be assessed on a case-by-case basis,” Mr. Garneau said.

The export permits Canada first suspended and now has cancelled cover millions of dollars of airstrike targeting and imaging equipment by Wescam going back several years. Companies normally apply for permits, which are valid for up to five years, and then use the permits to cover future exports over that period. Cancelling permits also means the gear cannot be sent back to Canada for repair; 25 of the permits cover Wescam equipment and four others are for a different exporter.

Officials at L3 Harris Wescam did not immediately respond to a request for comment.

But records show Turkey had pressed Ottawa to allow the shipment on the grounds that it was necessary to safeguard civilians in the Syrian province of Idlib. Turkey borders this province and backs opposition forces in Syria’s nine-year civil war. Its armed forces operate in Idlib and are seeking to prevent more refugees from streaming into Turkish territory.

Kelsey Gallagher, a researcher with Project Ploughshares, a disarmament group that tracks arms exports, said it’s unfortunate Canada is only acting now to cancel Wescam export permits for Turkey when, as far back as the fall of 2019, a United Nations panel identified Turkish TB2 drones being transferred to Libya.

“Why they couldn’t put two and together [earlier] … is beyond me,” Mr. Gallagher said.

He said the Armenian-Canadian community helped draw attention to the Nagorno-Karabakh case. “It’s clear they played a critical role in emphasizing the dangers in Canada not gainfully monitoring its exports of military goods abroad.”

NDP foreign affairs critic Jack Harris said Ottawa “didn’t really have much of a choice” but to cancel the permits given the overwhelming evidence of the illegal diversion. In late October last year, The Globe independently confirmed the Armenian government was in possession of pieces of a Turkish-made military drone that included Wescam airstrike-targeting gear. The Globe sent a photographer to an Armenian military compound to take photos of the pieces of the downed drone to get first-hand evidence of what exactly the Armenians had obtained.

A Russian-brokered ceasefire last November cemented Azeri advances in and around Nagorno-Karabakh, which is internationally recognized as a part of Azerbaijan but had been controlled by ethnic Armenians since the early 1990s, after the collapse of the Soviet Union.

Conservative foreign affairs critic Michael Chong said nobody should underplay the role Canadian airstrike targeting gear played in this conflict given the crucial influence of drones in helping the Azeris. Drones “were a game changer and completely upended the balance of power in the region,” Mr. Chong said.

He said the report released Monday is an admission the government made a mistake in approving this airstrike targeting gear in the first place.”

Armenian and Azerbaijani leaders in Russia for first meeting since Nagorno-Karabakh ceasefire
January 11, 2021 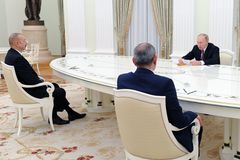 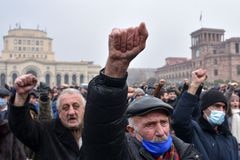 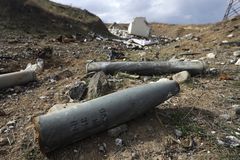