The federal government released its formal request for proposals to buy 88 advanced fighter jets after a last-minute effort this month to persuade four major suppliers to submit bids.

Tuesday’s announcement invites Airbus, Boeing, Lockheed Martin and Saab to compete for the massive contract, which Ottawa has estimated will cost up to $19-billion.

Interested bidders have until spring of 2020 to submit their initial proposals. The plan is to then cut the competition down to two bids, with a winner selected in 2022 and the delivery of the first aircraft coming in 2025.

Federal officials had previously circulated drafts of the request for proposals and have made extensive changes following feedback from the four interested suppliers.

In an interview with The Globe and Mail, Pat Finn, assistant deputy minister of National Defence, said federal officials have spent the past few weeks responding to concerns that the points system could favour one option over another. Reports circulated earlier this month that Airbus and Boeing could pull out of the process over the belief that the technical requirements favoured Lockheed Martin’s F-35 owing to language and points related to NATO-style strikes on foreign targets.

“We’ve gone out very recently with a last gasp to say: ‘Are there any showstoppers here that would prevent you from bidding?’ We got a couple of comments in some areas where it generally was a misinterpretation of what was there, so we cleaned things up,” he said, adding that last-minute requests are to be expected as firms seek to negotiate terms to their advantage.

“They have business decisions to make. We understand and respect that there’s quite an investment for them to make the next step … but certainly we’re hopeful and we’ve done a lot of work to try and make sure that we have a competitive environment and that this satisfies all of them.”

The formal requirements say all proposals will be assessed on a points system that awards 60 per cent for technical merit, 20 per cent for cost and 20 per cent for industrial benefits. Because some bidders said they were prevented from making pledges to ensure minimum amounts of manufacturing take place in Canada, Mr. Finn said those requirements will not be part of signed contracts, but the 20-per-cent weighting for economic benefits was increased from an earlier weighting of 15 per cent. Mr. Finn said 20 per cent is one of the highest weightings for economic benefits for Canada in history.

Officials with Airbus and Boeing provided statements to The Globe on Tuesday saying they are carefully reviewing the new information. A statement from Lockheed Martin went further, adding that “we look forward to participating in the competition.”

Officials with Saab did not immediately respond to requests for comment.

The continuing saga to replace the aging fighter jets has included two critical auditor- general reports – one in 2012 chastising the Conservative government for failing to follow proper process and another in late 2018 that found the Liberal government’s handling of the file has left Canada unable to meet its international obligations.

As of 2018, the Royal Canadian Air Force had 76 CF-18 aircraft and more than 1,450 military and civilian personnel working to support the fighters in some capacity.

The CF-18s were originally purchased in the early 1980s and were expected to provide about 20 years of service. Several upgrades have since been approved to extend their retirement date. Prime minister Stephen Harper’s Conservative government had announced a plan to buy 65 F-35 fighter aircraft to replace the F-18s by 2020.

Canada is one of nine countries that formed a partnership to develop the F-35 stealth fighter. However, Canada’s original plan to purchase the F-35s faced criticism over costs, the lack of public competition for the work and the fact that they are single-engine fighters.

As Liberal Leader during the 2015 election campaign, Justin Trudeau promised to scrap the planned purchase in favour of an “open and transparent” competition.

Conservative MP Rob Nicholson said the Liberal government appears to be putting political considerations ahead of the needs of Canada’s military by pushing off a difficult decision until after the fall election.

“They were very critical of everything that we did with the military and yet they have waited all these years for this, and now to postpone it after the next election, I think, is unacceptable,” he said. 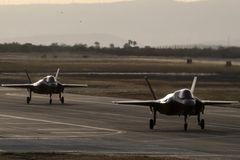 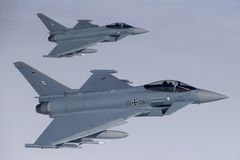