The federal government is stepping up efforts to protect Canadian intellectual property and strategically sensitive businesses from falling into the hands of foreign governments and their proxies.

Innovation Minister François-Philippe Champagne on Wednesday unveiled revised guidelines laying out new areas of concern for Ottawa as it scrutinizes foreign takeovers and investments in key sectors of the economy as well as funding of high-end research.

The warning from Ottawa follows similar moves in the United States as well as concerns in Canada over the loss of intellectual property and sensitive technology to foreign countries such as China.

Ottawa will now cast a more critical eye over foreign investments in businesses that trade in personal data, or mine critical minerals — such as lithium used in electric vehicle batteries – or develop cutting edge technologies it considers sensitive. This last category includes fields such as artificial intelligence, quantum science, biotechnology and robotics, where acquiring a company would give the buyer access to research and design, and manufacturing that has applications for militaries or intelligence agencies.

The Canadian Security Intelligence Service has repeatedly warned that Canada has been targeted by sophisticated state-sponsored actors that attempt to gain information and intelligence from researchers and companies here.

“Canada is signalling that it is not going to be as open or as friendly to countries that have potential national security concerns when it comes to our research institutions and funding agencies,” Jim Hinton, a leading Canadian intellectual property lawyer, said.

“Universities, I think, have been somewhat naive at times in Canada about the value of some of the research they are doing and this is a very clear message to them you have to be really careful about this information and it could have really sensitive applications,” he said.

Mr. Glossop said Ottawa’s decision to more carefully analyze foreign investment in critical minerals is a sign of the times, saying the U.S. and Canada are trying to become less reliant on China and Russia for these materials essential to electric cars, solar panels, wind turbines and other high-tech industries.

As Innovation Minister, Mr. Champagne has broad discretion to reject foreign takeovers. What Ottawa did Wednesday is to provide more explicit signals to foreign investors on areas of concern, experts say.

“This is guidance. ... They’re telling investors what they are going to look at. I suspect they have already been doing these things. They’re just making it more explicit,” said Sandy Walker, a Dentons LLP lawyer who is a specialist in the Investment Canada Act.

The United States has already raised concern about foreign takeovers of companies that collect personal data, she said. In 2019, the Committee on Foreign Investment in the United States, a government security panel, asked a Chinese company to divest itself of California-based Grindr LLC – which runs a dating app – and, in 2020, Beijing Kunlun Tech Co. Ltd. sold it to a U.S.-based firm.

Natalie Raffoul, an Ottawa IP lawyer, said she is surprised that Ottawa didn’t include telecommunications, semi-conductors, micro-electronics and agriculture on the list.

“Is it not important to Canada from a national security point of view? ... Why would you not have a more exhaustive list?” she said.

In a statement, Mr. Champagne said espionage and foreign activities by both human and cyberactors pose a significant threat to high-end Canadian research.

“Canada’s research is driven by our world-renowned researchers and institutions,” he said. “That’s why the government of Canada is taking steps needed to make sure Canadian researchers have the tools they need to mitigate potential risks and safeguard our knowledge and intellectual property they generate.”

The announcement comes after the government was criticized for partnering with Huawei Technologies Co. Inc. to sponsor computer and electrical engineering research at Canadian universities.

In February, the Natural Sciences and Engineering Research Council (NSERC), a federal agency, announced it was collaborating with the Canadian arm of Huawei Technologies Co. Ltd. to fund the studies. Top universities in the United States and Britain have shunned further research money from Huawei over intellectual-property and national-security concerns.

The federally funded council put up $4.8-million for research partnerships that include Huawei. The technology giant would not divulge its contribution but would only say it is “greater than $4.8-million.”

Canadian universities and researchers that responded to questions about the Huawei research partnerships pointed out that the Canadian government had not advised them against collaborating with the Chinese company.

In 2018, a Globe and Mail investigation revealed that Huawei had established a vast network of relationships with leading research-heavy universities in Canada to create a steady pipeline of intellectual property that the company is using to underpin its market position in mobile technology.

Jim Balsillie, the former chairman and co-CEO of BlackBerry Ltd. and the chair of the Council of Canadian Innovators, lauded the government for “a meaningful update to our investment regime” to protect “valuable IP and data assets.” 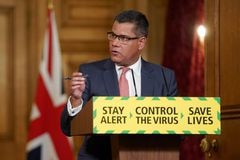 Follow Robert Fife, Steven Chase and Sean Silcoff on Twitter @RobertFife @stevenchase @SeanSilcoff
Report an error Editorial code of conduct
Due to technical reasons, we have temporarily removed commenting from our articles. We hope to have this fixed soon. Thank you for your patience. If you are looking to give feedback on our new site, please send it along to feedback@globeandmail.com. If you want to write a letter to the editor, please forward to letters@globeandmail.com.
Comments