A senior Canadian bureaucrat testifying before MPs Thursday declined to answer questions regarding whether the Prime Minister’s Office or the Foreign Affairs Minister’s office influenced a decision to allow the export of airstrike-targeting gear to Turkey this May, equipment now allegedly being used by Azerbaijan to attack Armenians.

Shalini Anand, acting director-general for the government’s export controls operations division, appeared before the House of Commons foreign affairs committee and was asked to explain why Ottawa granted export permits in May to allow imaging and targeting equipment to be shipped to Turkey despite a broad arms embargo against sending military goods to that country. Canada enacted the embargo a year ago.

Citing the need to protect the “commercial confidentiality” of companies obtaining export permits, Ms. Anand did not answer.

At issue is high-tech targeting gear manufactured by L3Harris Wescam of Burlington, Ont.: the MX-15D systems placed on military drones that are used to guide airstrikes. It’s been selling these to Turkey for years but a freeze on new export permits put in place in October, 2019 – after a military incursion into northern Syria condemned by allies, including Canada – posed an obstacle to new exports.

In May, 2020, however, as The Globe and Mail first reported, Canada granted two more export permits to ship seven MX-15D systems to Turkish drone maker Baykar.

The same made-in-Canada targeting and imaging systems are allegedly installed in Turkish drones being used by Azerbaijan in its conflict with Armenia. Turkey is a staunch ally of Azerbaijan and media reports this summer talk of drone sales by Ankara to Baku.

Armenia’s Prime Minister this week said drones have been retrieved from the Nagorno-Karabakh battlefield that include Canadian components.

Why Canada granted these new permits remains a mystery.

Conservative foreign affairs critic Michael Chong asked Ms. Anand on Thursday during her appearance before MPs to explain why Canada allowed more of these devices to be shipped to Turkey, and specifically whether the export controls division was encouraged to grant these permits despite an embargo on most new arms export permits.

The federal lobbyists' registry in February shows a representative of L3Harris Technologies, the U.S. parent company for L3Harris Wescam, communicated with a staffer in the office of Foreign Affairs Minister François-Philippe Champagne on topics that included “international trade.” It also shows that a representative for Baykar, the Turkish drone maker, also communicated with a senior official in the Privy Council Office in February on “international trade.”

That was the month before the new exports were approved.

“Was there any direction from the Prime Minister’s Office or Minister Champagne’s office to approve these export permits?” Mr. Chong asked Ms. Anand.

The Global Affairs bureaucrat declined to answer. “I am not in a position to discuss specific export permits for specific companies," she said.

In April this year, Ottawa modified its arms embargo on Turkey and added a loophole. It said prospective exporters should assume requests to ship Group 2 military goods – a sprawling category that includes most goods that are considered weapons – would be rejected. But, Ottawa added, exceptions would be made for matters relating to “NATO co-operation programs.”

Ms. Anand acknowledged Thursday that permits might still be allowed for reasons connected to the North Atlantic Treaty Organization, a military alliance to which Canada and Turkey both belong, but she did not elaborate.

Earlier this month, Canada suspended permits enabling the export of target-acquisition gear produced by Wescam to Baykar. This came one week after Global Affairs commenced an investigation into allegations this equipment has been diverted to the escalating Nagorno-Karabakh conflict between Azerbaijan and Armenia.

The Canadian government is required under domestic law and under the international Arms Trade Treaty to prevent, detect and stop the diversion of military goods to users other than intended customers. It’s also compelled to stop exports of such restricted goods that are shown to be used to harm civilians.

This week, Armenia’s government produced photos that it said proves these Turkish drones, with targeting gear from Canada’s Wescam, are being deployed by Azerbaijan against Armenians. It said it retrieved the drones after they were shot down.

Armenian Prime Minister Nikol Pashinyan used Facebook and Twitter to publicize the news, saying these downed drones bear markings indicating their origin. “It’s clear that [the drone] was manufactured in September, and the ultramodern optical unit was manufactured in Canada in June," Mr. Pashinyan said on Facebook. “This is important, because we now have clear evidence of Turkey’s direct involvement," Mr. Pashinyan said.

The embassy of Azerbaijan in Canada did not return repeated requests for comment.

The Armenian diaspora in North America, meanwhile, continues to mobilize in support of Armenia.

A lawsuit filed in a Washington, D.C., last week names L3Harris Technologies as a defendant and alleges the firm bears some responsibility for airstrikes committed in the Nagorno-Karabakh conflict by Azerbaijan because of its continued sales and support to Turkey. The claim cites the U.S. Alien Tort Statute that allows foreign nationals to sue for flagrant human rights violations in U.S. courts.

Officials at L3Harris Wescam and L3Harris Technologies could not be immediately reached for comment. 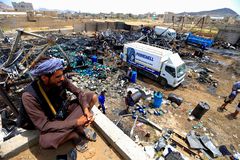