Patrick Brown is promising to set the record straight about his “sensational political assassination” in a new book, even initially comparing himself to Julius Caesar.

The former Ontario Progressive Conservative leader has teamed up with the publisher who was behind Conservative MP Maxime Bernier’s derailed book to pen a tell-all tale about “intrigue, scandal, betrayal, blackmail, and backroom politicking that includes some of Canada’s biggest political names.”

The book, titled Take Down: The Political Assassination of Patrick Brown, is due for release on Nov. 1. It is the same day that Mr. Bernier’s book was scheduled to hit shelves, until he put it on indefinite hold after the fallout from his comments that “fake Conservatives” from the Quebec dairy lobby helped propel Andrew Scheer’s leadership win.

Mr. Brown resigned as party leader on Jan. 25, hours after CTV News aired a story about sexual-misconduct allegations from two women during his time as a federal MP. Mr. Brown has denied the allegations, and is suing the network and its journalists. The network says it stands by its reporting.

“I was 170 days away from being the Premier of Ontario, or so I believed,” Mr. Brown writes in an excerpt from the beginning of the book, which is being released by Optimum Publishing International.

“Instead, on January 24th [2018], I experienced a sensational political assassination the likes of which haven’t been seen since Julius Caesar.” Late Thursday, Mr. Brown’s publisher, Dean Baxendale, told The Globe the Caesar line had been edited out by Mr. Brown and will not be in the final version of the book.

Mr. Brown’s lawyer, Howard Winkler, said he was aware of his client’s desire to write a book “as a means of exposing the truth and contributing to the process of vindicating his reputation.”

“I support Mr. Brown’s initiative, especially in light of the fact that the legal system does not provide the kind of timely disclosure of the truth that can be achieved through his proposed book,” Mr. Winkler wrote in an email.

He added that he expects the book will be reviewed prior to publication to ensure the content can be defended.

Mr. Brown decided not to run in the upcoming Ontario election after he was barred from running as a PC candidate. Since leaving his post, Mr. Brown was found to have broken Ontario’s ethics rules by failing to disclose a $375,000 loan from a close friend who later went on to become a Tory candidate. New nomination races were also held in a handful of ridings amid controversies about ballot-stuffing and fake memberships.

The outline of Mr. Brown’s book, provided to The Globe by Mr. Baxendale, details eight chapters ranging from Mr. Brown’s time in youth politics; his friendship with India’s Prime Minister Narendra Modi, which put him on an “obstacle course” with his own party, including former prime minister Stephen Harper; his relationships with NHL stars Wayne Gretzky and Connor McDavid; and his decision to run again for party leader before dropping out 11 days later.

He also describes “the internal fights” of the party, including a “terrible meeting” with social conservative and former PC candidate Tanya Granic Allen in August, 2016, which led to them becoming “political enemies.”

In an outline of Chapter 6, called “The take down,” Mr. Brown promises “an in-depth look at what happened, the true colours of ‘my team,’ naming names, who put the knife in, caucus betrayal. But the fascinating and interesting story of what I was opposing and why ‘Money and Power’ may have led to my demise.”

Chapter 7, called “The King’s not dead – Kill the King!,” details Mr. Brown’s return to the race before dropping out in February. He calls it “a behind-the-scenes look at the political process when the stakes cannot be higher; Wheeling and dealing; the offers made to me by rivals.”

Mr. Baxendale, the book’s publisher – who also who ran and lost as a PC candidate for Don Valley West in Toronto – said the book is still being written, but there will be more revealed after the June 7 election. There will be a “full media and book tour,” according to a news release, and “options for theatrical rights are currently available.” Mr. Baxendale told The Globe he’s in the midst of “negotiations on a movie deal.”

A spokeswoman for PC Leader Doug Ford’s campaign said she had no comment on the book. “Patrick is not the leader of this party,” Melissa Lantsman wrote in an e-mail. 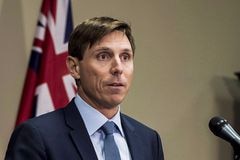