Ontario Regional Chief RoseAnne Archibald says a proxy will be appointed in her place at the Assembly of First Nations, a national advocacy organization, because of what she calls an effort to “discredit, humiliate, shame, and dehumanize” her.

Ms. Archibald believes she has become a “target of the AFN” as a result of a Chiefs of Ontario (COO) resolution seeking an independent financial review of the national organization.

“The hostile environment at the AFN has negatively impacted my ability to feel safe while working on the AFN Executive Committee,” she said in a statement late Monday evening.

“I have communicated this concern to the COO Leadership Council and they have agreed to take steps to appoint a proxy in my place, given the recent public attempts to tarnish my reputation.”

Ms. Archibald’s statement did not indicate how and when a proxy will be named.

On Friday, chiefs at the highest level of the Assembly of First Nations voted to proceed with a full investigation into allegations of harassment and bullying levelled at Ms. Archibald by multiple AFN employees. AFN National Chief Perry Bellegarde said an independent external investigator would be retained for the process.

The Globe and Mail reported Thursday a preliminary probe commissioned by the AFN into accusations of harassment against Ms. Archibald found “allegations and evidence to be credible” and merit a full investigation.

A copy of a Feb. 12 briefing report for the executive committee of the AFN discussed allegations brought forward by four people who say they were harassed by Ms. Archibald as well as “evidence of harassment of other staff.”

Ms. Archibald said she will do her part to participate in a fair and transparent process to address human resources complaints against her.

She also said the concerns raised by COO around the financial irregularities at the AFN are serious and legitimate issues that need to be addressed in an “expeditious and transparent way.”

“What has taken place is an effort to discredit, humiliate, shame, and dehumanize me,” she said.

“The AFN takes any claims of bullying and harassment seriously and we are committed to ensuring that everyone feels safe, welcomed, and valued,” he said.

“As chair, I am obliged to bring forward facts to the full executive committee in any breach of the AFN’s code of conduct,” he said. “It was the regional chiefs from across Canada who voted unanimously to commence a full investigation, not me.”

Mr. Bellegarde also said the AFN attempted to address the COO resolution at its most recent executive meeting but said Ms. Archibald’s lawyer requested it not be on the agenda.

“The AFN is committed to ensuring that this will be addressed at our next AFN executive meeting,” he said.

Ms. Archibald called Mr. Bellegarde’s comments misleading on Tuesday and said in a follow-up statement that she asked that the COO resolution be dealt with first but found herself “sidelined through legal means.”

Ms. Archibald, who was the first woman elected Ontario Regional Chief and the first female Chief of Taykwa Tagamou Nation, also said she has found the AFN executive committee to be a challenging environment for female leadership.

“I am not the only person with this type of experience.” 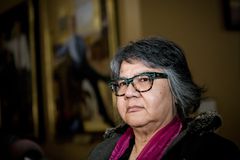