The revised projected deficit for that fiscal year is $8.4-billion higher than the $19.7-billion projected in Mr. Morneau’s March budget.

The government’s first update since the federal election shows larger deficits for this year and the following four years. The changes are primarily due to two factors: the Liberal government’s recently announced tax cut and a major adjustment to Ottawa’s pension obligations.

Over a five-year period, Ottawa is expected to pay an extra $27.8-billion into federal employee pensions and other obligations because interest rates are expected to be lower in the coming years than previously assumed. While lower rates save the government money on borrowing costs, those savings are minor compared with the pension revisions.

The tax cut was a key part of the Liberal campaign. It will take effect Jan. 1 and will be fully phased in by 2023. It will increase the basic personal amount that individuals can earn tax free. The Liberal platform said that tax cut would cost more than $5.6-billion a year once fully implemented.

After accounting for the pension changes and the tax cut, the latest deficit forecast over the coming years is broadly in line with what the Liberals promised in their 2019 campaign platform. The challenge is that, beyond the tax cut, the Liberal government has yet to account for the billions in spending pledges that were included in that platform.

Mr. Morneau faces pressure to deliver on Liberal Party promises, but he may also have to consider at least some priorities of other parties in order to survive confidence votes in the minority Parliament. At the same time, he faces calls from provinces and territories for more generous transfer payments. He is meeting this week in Ottawa with his provincial and territorial counterparts to discuss their requests.

To control spending, Prime Minister Justin Trudeau gave the Finance Minister a mandate to “continue to reduce” the federal debt to GDP ratio. Monday’s report shows the federal debt-to-GDP ratio climbing from 30.8 per cent last year to 31 per cent this fiscal year and next, before declining slightly in future years.

As a result, he said Mr. Morneau faces difficult budget decisions, such as whether to shelve some campaign promises, increase tax revenue or allow deficits and debt to climb.

BMO chief economist Doug Porter said it would be unwise to push deficits any higher at this point. He said the government should leave itself room to act in the event of an economic downturn.

“No matter how we arrived at this spot, Ottawa has less flexibility to embark on major new spending measures, unless policy makers are willing to ramp up revenues elsewhere, or they are willing to let the deficit run even higher,” he said. “Given the advanced nature of this economic cycle, and an already tight job market, such a deficit bump seems far from prudent.”

Mr. Morneau pointed reporters to government plans to find $1.5-billion a year in internal savings, and said he will deliver on the party’s campaign promises while keeping the federal debt-to-GDP ratio under control.

“Nobody said it was going to be easy,” he said. “Our challenge will be to continue to grow the economy and make sure we have the capacity to make the investments we want to make for Canadians.”

Conservative MP and finance critic Pierre Poilievre said it is clear why the government waited until after Parliament rose for the holidays to release these new numbers.

“They’re almost certain to add far more debt than they ever promised during the most recent election,” he said. 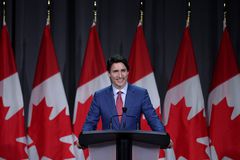 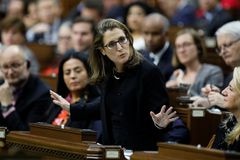 Jagmeet Singh says he’d rather push Liberals to do better than work with Tories
December 16, 2019 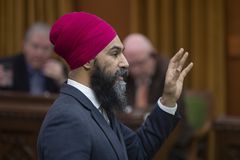