The Quebec government is joining other provinces in their legal fight against Ottawa’s carbon tax, hoping to convince the Supreme Court of Canada that a key part of the federal law intrudes on provincial jurisdiction.

The announcement by François Legault’s government came as a surprise on Monday, even though Quebec is not going as far as provinces such as Alberta and Ontario in opposing the federal climate-change policy.

Instead, the Quebec government will continue to participate in a cap-and-trade system that puts a price on carbon, but is planning to argue in court that Ottawa does not have the power to decide whether carbon pricing by the provinces fails to meet federal standards.

In political terms, the decision creates a further challenge for Prime Minister Justin Trudeau who will be defending the federal carbon tax in the Oct. 21 general election while Conservative Leader Andrew Scheer is promising to scrap the measure.

The governments of Saskatchewan and Ontario have both contested the legality of the carbon tax but their provinces’ top courts sided with Ottawa. The Supreme Court will hear an appeal of the Saskatchewan decision on Dec. 5.

Quebec did not participate in the initial challenges, but it is now planning to argue it is not up to the federal government to judge whether provincial carbon-pricing systems are stringent enough. While the full details of its position remain unknown, the Quebec government is planning to assert Ottawa does not have the power to evaluate the effectiveness of provincial plans to lower greenhouse gas emissions.

“For us, it is important to protect provincial jurisdictions,” Mr. Legault told reporters in Quebec City. “Justin Trudeau and I both agree on the need to put a price on carbon, but there are many ways to do it and it should be up to the provinces to decide how to do it.”

Prince Edward Island and New Brunswick are also intervening in Saskatchewan’s appeal to the Supreme Court; the CBC reported Monday night that New Brunswick has decided to abandon its own challenge of the federal tax.

Quebec’s announcement came one day before the start of a meeting of the 13 provincial and territorial premiers in Saskatoon and surprised federal officials, who felt they had an ally in Quebec City in their climate-change fight.

“Our government’s approach gives provinces and territories the flexibility to choose a carbon pollution pricing system that works for them, while maintaining a national approach,” said Sabrina Kim, a spokeswoman for federal Environment Minister Catherine McKenna. “We are confident that the federal government’s approach … is constitutional, as was confirmed by two appellate courts.”

Nicky Cayer, a spokesman for Quebec Justice Minister Sonia LeBel, said the province is opposed to provisions in the federal law that allow Ottawa to judge whether provincial systems are stringent enough.

The issue is important because Ottawa has given itself the ability to judge which provinces have adequate carbon-pricing systems and can be exempted from the federal carbon-pricing “backstop.”

Stewart Elgie, a professor of law and economics at the University of Ottawa, said that if Ottawa cannot evaluate whether provinces have roughly comparable stringency, they cannot require an equivalent standard across the country.

Manitoba had announced plans for its own carbon tax, but Premier Brian Pallister scrapped it last October after Ottawa deemed it would not go far enough.

So far, the Liberal government has imposed a carbon tax on four provinces that do not have their own pricing systems: Ontario, New Brunswick, Saskatchewan and Manitoba. Ms. McKenna has said that Albertans will face a federal carbon price on Jan. 1, after Premier Jason Kenney killed the system imposed by the previous NDP government.

The federal carbon tax kicked in on April 1 at $20 a tonne – or 4.5 cents a litre on gasoline – and will rise to $50 a tonne in 2022. Ms. McKenna has said the Liberals do not plan to increase the rate after 2022, but will rely on additional measures to meet Canada’s target of reducing greenhouse gas emissions by 30 per cent below 2005 levels by 2030.

In ruling against Saskatchewan and Ontario, the provincial courts of appeal said provinces have the right to regulate greenhouse gas emissions, but Ottawa has the right to set national standards. 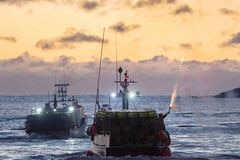