The Quebec government has intervened in a dispute between the National Gallery of Canada and two Quebec museums, pouring cold water on the Ottawa institution’s attempts to buy a historic French painting.

The move by Quebec’s Liberals is the latest twist in a cultural debate that began when the National Gallery admitted earlier this month that it was selling off a multimillion-dollar Marc Chagall painting to buy another historic piece it said was in imminent danger of leaving the country. The sale is the biggest in the gallery’s history.

Quebec Culture Minister Marie Montpetit has filed notice that she will give special heritage protection to a 1779 Jacques-Louis David painting that the National Gallery and two Quebec museums are competing to buy.

The designation will mean the canvas can’t leave the province without the Minister’s permission and the government has the right to buy the painting before anyone else.

“It is my duty as minister to protect this work that is part of our history,” Ms. Montpetit said in a French statement late Monday. “It is with pride that I announce today that Jacques-Louis David’s Saint Jerome will remain in Quebec.”

Filing notice is the beginning of the classification process, but it also means that, for now, the painting is considered to have already been classified.

Saint Jerome Hears The Trumpet Of The Last Judgment is currently the property of the civil corporation of the parish of Notre-Dame de Quebec, which is selling the painting it has owned for nearly a century to pay for upkeep at two historic churches in Quebec City.

The National Gallery put in an offer of US$5-million in December, conditional on the sale of the 1929 Marc Chagall painting The Eiffel Tower at a Christie’s auction house on May 15. The gallery said it did so because it heard that international buyers were ready to swoop in and take the David overseas.

The Musée de la civilisation in Quebec City, which is the legal depository of the David painting, is working on a joint bid with the Montreal Museum of Fine Arts to raise the funds through public and private sources to buy the painting. Saint Jerome is currently on display at the MMFA.

All three institutions have argued that the artwork should remain in Canada, but the Quebec museums say that the piece should stay in their province.

Stephen LaRoche, director general of the Musée de la civilisation, said he was pleased by how quickly the Quebec government intervened.

“We welcome this decision, which gives us the opportunity to work on this file in a calmer and more serene way, notably by giving us additional time to find a constructive solution to keep this work in Quebec,” he said.

Nathalie Bondil, director general of the Montreal Museum of Fine Arts, said she hoped all the institutions will have a constructive dialogue.

“Everyone is now in agreement that the David painting, classified as a Quebec heritage object, shall remain in Quebec,” she said.

The Quebec museums had suggested earlier this month that the painting could be shared between the institutions. The National Gallery, which had displayed the David from 1995 to 2013, initially shot down that idea.

“It’s a piece of canvas with some paint on it that’s 250 years old. It’s not a child of a divorced couple that shuttles back and forth,” director Marc Mayer told The Globe last week.

In an open letter released Monday and signed by both board chair Françoise Lyon and Mr. Mayer, the National Gallery suggested that after a week of “unusually lively public debate,” it was now open to alternative arrangements.

“Our avid interest in [the painting] notwithstanding, were we to ultimately purchase the painting, it need not be on exclusive permanent display at the National Gallery of Canada. We would welcome developing a long-term loan agreement with museums in Quebec,” the letter said.

The National Gallery said it was going ahead with the sale of the Chagall, even if the purchase of the David is in jeopardy. The gallery said it would use the proceeds of the sale – estimated to be between US$6-million and US$9-million – to establish a “financial safety net” that would be used to acquire other works of art that are at risk of leaving the country. 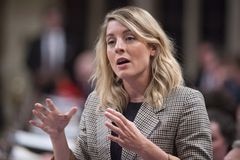 Globe editorial: In spat over a painting, the National Gallery should learn to share
April 17, 2018