The RCMP have charged one of its highest-ranking intelligence officials with illegally storing and communicating classified information, raising fears of a massive security breach at the national police force that stands to affect the operations of law-enforcement agencies in Canada and around the world.

Current and retired members of the RCMP were shocked by the arrest of Cameron Jay Ortis, who was director-general of the National Intelligence Coordination Centre. The 47-year-old faces seven charges under the Security of Information Act and the Criminal Code in relation to alleged infractions between 2015 and 2019.

Mr. Ortis was arrested on Thursday and appeared in court on Friday. His position at the RCMP provided him with access to sensitive information from the police force, other Canadian law-enforcement agencies and from allied police and intelligence services around the world, current and retired RCMP officials said.

Security experts said the charges will affect Canada’s reputation and cause concerns among allies, including questions over what information was leaked to whom and whether any investigations were compromised.

Mr. Ortis, who speaks Mandarin, according to his Linkedin profile, was a rare civilian to rise up the ranks of criminal intelligence at the RCMP. His PhD thesis at the University of British Columbia dealt with cybersecurity in East Asia.

“The Crown believes that he intended to communicate that information to people he shouldn’t be communicating to,” Mr. MacFarlane said during a hearing in an Ottawa courtroom.

Former intelligence officials say the damage done to national security could have been enormous given the four-year span of the alleged infractions.

She said that as an RCMP director-general, Mr. Ortis would have had access to some of the most sensitive secrets controlled by Canadian police. He would have also frequently had exchanges with other federal security agencies.

“This is the first person permanently bound by secrecy ever to be charged with disclosing special operations information,” said Leah West, a former federal lawyer who is now a lecturer on national-security issues at Carleton University.

“Special operations information is Crown-jewel information,” she explained, adding that federal legislation describes it as information that can relate to people acting as sources for intelligence agencies or as information related to military campaigns.

Richard Fadden, a former director of CSIS, said it’s unusual for someone who has worked in intelligence in Canada to face such charges, saying people in this area undergo exhaustive screening.

He said such a role usually requires a lot of collaboration with other security agencies, which will force the RCMP to engage with other agencies in Canada and around the world to assess and contain any damage.

“They need to figure out what information is at issue and the question then is, whose information is it?” he said. “Was any allied or Five Eyes information at issue? If the answer to that is no, that is good."

Mr. Ortis was well known throughout Canada’s policing and law-enforcement communities. Sources who have been granted confidentiality by The Globe because they are not authorized to speak publicly about the matter said Mr. Ortis made a presentation on foreign interference in Canadian elections at a meeting of law-enforcement officials in Charlottetown in May.

Mr. Ortis was hired when Bob Paulson was RCMP commissioner.

“I’m shocked beyond words,” Mr. Paulson said on Friday, adding he had no other comment on the matter.

Reached on Friday at his home in Abbotsford, B.C., Mr. Ortis’s father, Dave Ortis, said he and his wife, Loretta, were aware of the charges against their son but declined to comment on them or confirm when they had last spoken to or seen him.

Prime Minister Justin Trudeau told reporters on Friday he was made aware of the arrest. "I can assure you that the authorities are taking this extremely seriously, but you might understand I have no comment to make on this issue right now.”

The Crown is requesting Mr. Ortis be denied bail. He appeared via video link from the Ottawa courthouse’s holding cells, saying very little during his brief appearance. His next court appearance will be on Sept. 20.

Mr. Ortis’ PhD thesis was entitled Bowing to Quirinus: Compromised Nodes and Cyber Security in East Asia. In his acknowledgements, he thanked his parents and faculty, and added: “I must also thank the anonymous individuals in East Asia and North America who graciously agreed to speak on the issues addressed in this study.”

In 2013, naval intelligence officer Jeffrey Delisle was sentenced to 20 years in prison for selling military secrets to Russia from 2007 to 2011. The matter came to light when the FBI tipped off CSIS to the infractions. 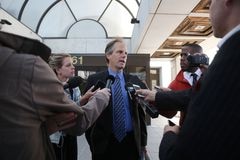 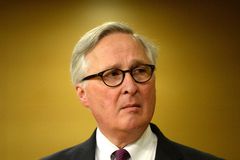 Follow Daniel Leblanc and Marieke Walsh on Twitter @danlebla @mariekewalsh
Report an error Editorial code of conduct
Due to technical reasons, we have temporarily removed commenting from our articles. We hope to have this fixed soon. Thank you for your patience. If you are looking to give feedback on our new site, please send it along to feedback@globeandmail.com. If you want to write a letter to the editor, please forward to letters@globeandmail.com.
Comments are closed