Remember why you ran for public office; stick to your values and convictions; and always reject cynicism and populism as you work to make Canada a better place.

That was the message former NDP MP Paul Dewar delivered to his former caucus colleagues during an emotional return to Parliament Hill on Wednesday, and one that he hopes they will continue to carry with them.

Dewar, who represented Ottawa Centre from 2006 to 2015 and also sought the party’s leadership in 2012, revealed over the weekend that the brain cancer he was diagnosed with in February is terminal.

In an interview with The Canadian Press, Dewar said while many NDP MPs have reached out since news of his diagnosis broke, he wanted to attend the party’s weekly caucus meeting to see them in person and share a special moment.

At the same time, he wanted to deliver a “simple” reminder, namely to avoid the “potent mix” of fear and cynicism that has taken hold in politics and instead put forward ideas to make the country better.

“Certainly in these last couple of months, it’s become crystal clear that the role that people should have in public life is to stick to their convictions and their values,” Dewar said.

“And I just underlined that message to them. Because it’s tempting to be cynical and it’s very easy to be distracted.”

He also reminded his former colleagues that while all party leaders try to put their own mark on the organization, New Democrats are ultimately defined by core values that include looking out for those who don’t have a voice and promoting equality.

There have been questions in recent months about whether NDP MPs are solidly behind Jagmeet Singh, who took over as leader last October, but Dewar said that his comment was not in reference to any specific concern or event.

Singh said Dewar delivered a powerful and important message to caucus on Wednesday, and that the former MP remains an inspiration across the country.

“We know that as New Democrats we have a goal of making life better for people, finding ways to make people’s lives better, talk about the issues that impact people day to day and how we can actually find solutions to improve their lives,” Singh said.

Several NDP MPs described the mood in the caucus room as both emotional and energizing, and said Dewar’s message was important given the success of populist politicians such as incoming Ontario premier Doug Ford and U.S. President Donald Trump.

“It was a timely message because the NDP in Ontario doubled their seats. But we have Doug Ford as premier. So it’s a tough time for pink lefties.”

Dewar’s address prompted NDP MP Helene Laverdiere to take stock during what is always an extremely busy time of the year on Parliament Hill and remember why she ran for office.

News of Dewar’s most recent diagnosis drew tributes from all parties this week, as MPs offered prayers as well as support for a new initiative that Dewar will launch next week called Youth Action Now.

The initiative will focus on supporting projects devised by youth to address famine, poverty, pollution and other social ills. 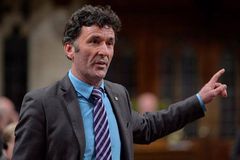