Conservative Leader Andrew Scheer says the Liberals’ decision to name an anti-Conservative union to a panel that will decide which media outlets receive government funding is the latest example of Prime Minister Justin Trudeau “stacking the deck” in his favour to get re-elected in October.

In an interview with The Canadian Press Sunday, Scheer said he believes the decision to include Unifor on the panel – which will determine eligibility for a $595-million bailout package – undermines the credibility of the panel’s work.

“There’s no reason for Unifor to be on this panel. They are a very aggressive, partisan group with very aggressive and partisan goals, even as late as a couple of days ago attacking Conservatives and me personally, and yet Justin Trudeau has decided to put this group on the panel,” Scheer said.

“That is completely unacceptable.”

Unifor has campaigned against the Conservative party and, in November, published tweets calling itself Scheer’s “worst nightmare.”

Earlier this week, the union’s national president Jerry Dias said the Conservative leader is trying to undermine confidence in a free and independent press by raising concern about Unifor’s presence on the panel. Dias compared Scheer’s tactics to those employed by U.S. President Donald Trump.

This further proves Unifor’s partisan leanings against his party and should disqualify the union from participating in the process, Scheer said.

Heritage Minister Pablo Rodriguez has defended Unifor’s place on the panel, saying the union has been included among other groups that represent journalists to ensure broad representation from the industry. (Globe and Mail staff are among the journalists represented by Unifor.)

“Unifor is the single largest media union representing over 13,000 workers coming from a wide diversity of newspapers. We feel that putting the voice of journalists on this panel is essential. After all, who is best paced to advocate for the future of journalism than journalists themselves?” said Rodriguez’s spokesman Louis Belanger.

“Journalism is at the core of our democracy, but Conservatives aren’t one to miss an opportunity to attack its independence. They are into conspiracy theories and it’s insulting to the intelligence of Canadians and the professionalism of journalists.”

Belanger also noted the panel will not decide which organization gets what, but rather will advise on criteria that would be applied by a second panel, which has not yet been created.

But Scheer said he believes this move is indicative of a broader strategy by Trudeau in making decisions to give himself an upper hand in advance of the fall federal election.

He pointed to changes made to the amounts of money political parties can spend in the run-up to a federal election – changes Scheer says mainly affect the Conservative party – while no limits have been placed on government spending or travel in advance of the writ period.

“They’ve only applied that to opposition parties,” he said. “So we expect to see ministers flying around and making announcements and government advertising continuing at a time when political parties won’t.”

The Conservative leader also said the Liberals presented opposition parties with a “fait accompli” when it created the new commission on leaders’ debates.

“(They) said ‘here’s how the debate commission will work. Here are the criteria. No ability for consultation, just rammed that through,” Scheer said.

Meg Jaques, press secretary for Democratic Institutions Minister Karina Gould, says the new elections modernization law does place limits on government advertising during a dedicated pre-writ period that will begin June 30 – a legislative change that was made to address the fact that former Conservative government led by Stephen Harper did not limit the government’s spending before the 2015 election and “took advantage of the government’s resources to spend taxpayers dollars for partisan purposes.”

As for the debates commission – it is independent of government and its work is being guided by Canadians, Jaques said.

“The independent debates commission we announced reflects what was heard from cross country consultations. The main message that we took away was that debates should be organized in the interests of Canadians.”

But Scheer remains convinced the Liberals are “stacking the deck against Justin Trudeau’s political opponents” ahead of the Oct. 21 election. A Conservative official said Scheer and his MPs plan to take this message to the House of Commons when it resumes this week for its final four weeks of deliberations before voting day. 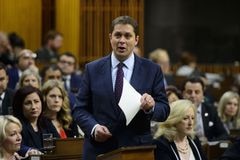