Conservative Leader Andrew Scheer is facing pressure to keep his promise to weed out intolerance from his party, and to impose stiffer punishment on an MP who publicly quoted from the manifesto written by the Christchurch gunman last week.

In the statement announcing the punishment, Mr. Scheer said it was “unacceptable” for Mr. Cooper to have quoted from the manifesto written by the the mass shooter who killed 51 people at two mosques in New Zealand in March.

However, Mr. Suri called for Mr. Cooper’s ouster from the Conservative caucus and not just from the justice committee, pointing to Mr. Scheer’s recent speech in which the Conservative Leader denounced “intolerance, racism and extremism of any kind.”

“What is deeply concerning is the fact that Mr. Cooper had the manifesto in his possession and read it in a parliamentary committee as a federal MP,” Mr. Suri said in an interview on Sunday. “This is a document from a white extremist who murdered 51 innocent people. That is concerning.”

Mr. Suri was one of six witnesses at a justice committee hearing on online hate last Tuesday. In his opening statement, he said hate speech on the internet is an “enabler, a precursor and a deep contributor to not just real-life hate, but to murder.” In particular, Mr. Suri referred to recent attacks in places of worship, before laying out the online history of the gunman who killed six Muslims in Quebec City in 2017.

When it was his turn to speak, Mr. Cooper said that Mr. Suri “should be ashamed” for the comments that linked “conservatism with violent, extremist attacks. They have no foundation, they’re defamatory and they diminish [Mr. Suri’s] credibility as a witness.”

Mr. Cooper went on to read a portion of the manifesto in which the Christchurch gunman points to his admiration for the political values of the Chinese government. The document was banned in New Zealand after the attack.

Mr. Cooper’s comments prompted condemnation from other MPs at the hearing, and his removal from the justice committee over the weekend.

“Reading the name and quoting the words of the Christchurch shooter, especially when directed at a Muslim witness during a parliamentary hearing, is insensitive and unacceptable,” Mr. Scheer said on Saturday.

Mr. Cooper remains a member of the Conservative caucus and deputy critic for justice. On Saturday, he apologized in a statement to Mr. Suri and to all Canadians.

“I quoted the words of a white supremacist anti-Muslim mass murderer in an ill-advised attempt to demonstrate that such acts are not linked to conservatism. I absolutely should not have quoted these words nor named the perpetrator,” he said.

In a speech on immigration last week, Mr. Scheer sought to dispel Liberal attempts to portray the Conservative Party as anti-immigrant, saying racists are “not welcome” in the party.

“There is absolutely no room in a peaceful and free country like Canada for intolerance, racism and extremism of any kind. And the Conservative Party of Canada will always make that absolutely clear,” Mr. Scheer told a Toronto audience.

Conservative officials did not respond to requests for further comments on Sunday.

Liberal MP Randy Boissonnault argues that the Conservative Leader is not living up to his word.

“Simply removing Mr. Cooper from the justice committee when there are only three weeks left in the parliamentary session is a weak response,” Mr. Boissonnault said in a statement to The Globe. “This is not showing Mr. Cooper ‘the door,’ as Mr. Scheer said he would do.” 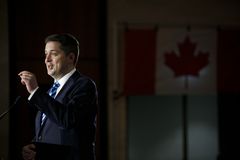 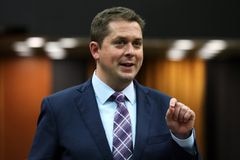