Federal opposition parties are accusing the Trudeau government of creating an unprecedented crisis inside the Canadian Armed Forces even as some have started to question the leadership of Canada’s top general.

The comments followed news of Lt.-Gen. Paul Wynnyk’s plan to step down abruptly as the military’s second-in-command, a decision he linked in a resignation letter to an aborted attempt to reinstate Vice-Admiral Mark Norman into the position.

Wynnyk’s departure as vice-chief of the defence staff, effective Aug. 9, is the latest blow to the Canadian military, whose top ranks have been in a perpetual state of upheaval since Norman was suspended as second-in-command.

Some analysts have pointed the finger at Chief of the Defence Staff Gen. Jonathan Vance, but Conservative Leader Andrew Scheer on Wednesday laid the blame squarely at Prime Minister Justin Trudeau’s feet.

In a statement, Scheer alleged the Liberals’ “political interference” in Norman’s breach-of-trust case, which was dropped in May, had “created unprecedented chaos” in military and ruined the careers of Norman and Wynnyk.

“In four years, (Trudeau) has destroyed the careers of two of our country’s most senior military officers and caused instability and turmoil at the highest levels of the military,” Scheer said.

Norman’s lawyers repeatedly accused the government of interfering in their client’s case by withholding key documents and information that they say could have helped demonstrate his innocence.

The Liberals have denied any wrongdoing in the case, which saw Norman suspended and later charged for allegedly leaking government secrets about a shipbuilding contract to a Quebec shipyard before the case was stayed in May.

But the allegation has been picked up by the Conservatives and New Democrats, who say the result is the loss of first Norman and now Wynnyk – and growing instability at the top of the Canadian military.

“I really hold the prime minister and the minister of defence responsible for the chaos that we’ve seen recently in their vendetta against Vice-Admiral Norman,” said NDP defence critic Randall Garrison.

“Without any evidence, they drove Vice-Admiral Norman out of his position. And we will never be privy between the chief of defence staff and the prime minister and the minister of defence over that, but I believe that direction came from the very top.”

Vance has taken sole responsibility for suspending Norman as vice-chief of defence staff in January 2017 after learning the RCMP was investigating him.

Defence Minister Harjit Sajjan did not respond to the opposition charges Wednesday, but thanked Wynnyk in a statement for his service and leadership during his 38 years in uniform, including his time as vice-chief, which “will fundamentally reshape the Canadian Armed Forces for the better.”

Yet even as the Liberals faced opposition attacks on Wednesday, there was an emerging debate about Vance’s leadership of the military, which is entering its fifth year, making him one of the Canadian Forces’ longest-serving defence chiefs.

In his resignation letter, reportedly sent to more than two dozen generals, Wynnyk wrote that when he was appointed vice-chief of the defence staff on a permanent basis in July 2018, Vance insisted on a two-year commitment.

Before that, Wynnyk had been one in a series of fill-ins as the military waited for Norman’s breach-of-trust case to make its way through the courts. Wynnyk had planned to retire this summer.

However, according to the letter, Vance asked Wynnyk to make way for Norman by retiring after the breach-of-trust case was dropped – only to ask him again to stay after the government reached a still-undisclosed settlement with Norman in June that led to Norman’s retirement instead.

Wynnyk instead told Vance that he is pressing ahead with his retirement, leaving the vice-chief of the defence staff position empty and making him the latest in a string of senior officers to retire.

“The turnover rate amongst the senior officers in the military has been pretty extraordinary over the last couple of years,” said analyst David Perry of the Canadian Global Affairs Institute. “And it’s not a good dynamic to have that high a degree of turnover.”

While some, like Garrison, suggested the Liberals put Vance in a difficult position, others such as retired colonel Michel Drapeau said there had been a “failure in generalship” by the defence chief over the last number of years.

That includes his management of the Norman file, which Drapeau argued has divided the military’s officer corps, and grumbles about his domineering style and quickness to support controversial government decisions like the need for interim fighter jets.

Conservative defence critic James Bezan echoed some of Drapeau’s concerns, saying the general “has been the good soldier carrying forward, unfortunately, the political agenda of the prime minister and Minister Sajjan.”

Yet both he and Garrison said the government was ultimately to blame and replacing Vance now would create even more instability in the Forces.

“I wouldn’t want to see Gen. Vance step down before the next election,” Bezan said. “We need to first replace the prime minister and the defence minister before we replace the chief of defence staff.”

Trudeau’s spokesman Cameron Ahmad in an e-mail said the government believes in Vance, a sentiment echoed by Sajjan.

“I continue to have confidence in the chief of the defence staff,” Sajjan said in his statement.

“Gen. Vance is an integral part of the defence team and I have faith in him and his team as we implement our ambitious defence policy.”

Given the importance of the No. 2 position, which involves overseeing much of the military’s actual administration, the focus should be on finding a new vice-chief of defence staff, said retired colonel Brett Boudreau, now a fellow with CGAI.

“Continuity of senior command is a useful thing, especially when implementing considerable change such as a defence policy,” he said. “Stability in the VCDS position needs to be restored, it’s too important to the management of the institution to be a revolving door.”

Second-in-command of Canadian Forces to resign, cites aborted plan to replace him with Norman
July 9, 2019 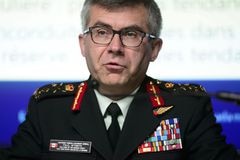