Foreign Affairs Minister Chrystia Freeland and Defence Minister Harjit Sajjan are holding talks with their U.S. counterparts in Washington Friday that will focus on Beijing’s detention of two Canadians caught up in an international dispute over the Vancouver arrest of a Chinese high-tech executive.

The meeting with Secretary of State Mike Pompeo and Defence Secretary James Mattis had been scheduled before Monday’s arrests of entrepreneur Michael Spavor and former Canadian diplomat Michael Kovrig by Chinese security services.

China’s Foreign Ministry confirmed on Thursday that both men are being held on suspicion of “engaging in activities that endanger the national security" of the country. A Canadian government official said Ottawa is still pressing Beijing to gain access to the two men.

Related: Canadians living in China worried they could be next to be detained: Feeling ‘a tad less proud, and safe, with a Canadian flag on me’

Opinion: China, the U.S. and Canada risk betraying their values in Huawei case

Opinion: Canada is stuck holding Huawei CFO for a ransom that could be soybeans

Initially, Friday’s talks were scheduled to deal with wide-ranging global conflicts such as the war in Yemen and Russian aggression in Ukraine, but two sources told The Globe and Mail that the focus has now shifted to China’s detention of the two Canadians and Beijing’s anger over the arrest of Huawei Technologies Co. Ltd. chief financial officer Meng Wanzhou on fraud charges relating to U.S. sanctions against Iran.

The sources, who were granted anonymity because they were not authorized to speak about the Washington meeting’s agenda, could not say whether Ms. Freeland would raise Canada’s concerns about U.S. President Donald Trump’s suggestion that he might use Ms. Meng as a bargaining chip in the U.S.-China trade war. One source said it would depend on the tone of Friday’s discussions.

Mr. Trump’s suggestion that Ms. Meng could be used as a political pawn in trade negotiations irritated the Trudeau government, including Ms. Freeland. She told reporters on Wednesday that it was “quite obvious” any foreign country requesting extradition should ensure that “the process is not politicized.”

He said he hopes Ms. Freeland also alerts the Americans to the risks of tainting the extradition case if Ms. Meng’s detention is perceived to be politicized.

“I expect Minister Freeland will reiterate Canada’s concerns about Mr. Trump’s remarks and the difficult position that they put Canada in,” said Prof. Paris, now teaching international affairs at the University of Ottawa. “I hope she seeks assurances that the administration will treat this case according to established norms of due process.”

China has strongly protested against Ms. Meng’s arrest to U.S. and Canadian officials and accused both countries of a premeditated attempt to undermine the global aspirations of telecommunications giant Huawei, whose founder is Ms. Meng’s father.

Prof. Paris said the Canadian cabinet ministers may also ask Washington to step up to defend Canada in this conflict.

“Canada is America’s closest ally. We are paying a price to meet our legal obligations under the extradition treaty. The United States should have our back," he said.

Mr. Trudeau, who has said that there was no political involvement in the arrest of Ms. Meng, is facing pressure to win the release of the detained Canadians.

Mr. Spavor, like Mr. Kovrig, was taken into custody on Monday − days after Beijing warned that Canada could face “serious consequences” over the arrest of Ms. Meng. She was released on $10-million bail on Tuesday after being detained on Dec. 1 at the request of the United States.

The Global Affairs Department said on Thursday that Canadian officials have raised the case of both men directly with Chinese authorities.

Mr. Scheer said their arrests must be handled at a leader-to-leader level, and urged the Prime Minister to reach out to Mr. Xi.

“It is completely unacceptable that Canadian citizens on Chinese soil are being used in this way,” Mr. Scheer told reporters. ”Given that we have Canadian citizens who are being detained in what appears to be a direct link to an independent investigation going on in Canada, I think it has to be elevated and [the PM must] act very early on this,” he said.

The Prime Minister’s Office had no comment on Mr. Scheer’s demand but Ms. Freeland’s office accused the Conservative Leader of playing politics.

“We take any situation of a Canadian under duress abroad extremely seriously,” said Adam Austen, Ms. Freeland’s press secretary. “Such situations involving Canadians in difficulty should never be the subject of partisan plays.”

On Wednesday, Ms. Freeland said she had raised Mr. Kovrig’s arrest with China’s Ambassador to Canada, Lu Shaye, and that Canada’s Ambassador in Beijing, John McCallum, has spoken to the country’s Foreign Ministry.

Mr. Spavor and Mr. Kovrig know each other, according to two people familiar with them.

Mr. Kovrig, who now works as an analyst for International Crisis Group, is on a leave of absence from Canada’s foreign service and is not entitled to diplomatic immunity.

Mr. Scheer said he agreed with the government’s position that the arrest of Ms. Meng, who is considered corporate royalty in China, was not a political decision, and was handled appropriately by Canadian Justice Department officials at the request of U.S. law enforcement.

“It is incredibly important that we have an independent system where police agencies make decisions based on evidence and the rule of law and not political interference,” Mr. Scheer said. “We also need to make sure that we unequivocally denounce any type of repercussions to Canadians on foreign soil in China as a result of the actions of independent police agencies here."

Canadians living in China worried they could be next to be detained: Feeling ‘a tad less proud, and safe, with a Canadian flag on me’ Subscriber content
December 14, 2018 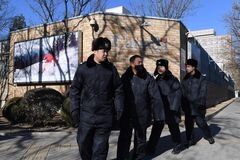 Opinion
Canada must stand up to China the bully
December 14, 2018

Opinion
On China, has Canada lost its sense of justice?
December 13, 2018 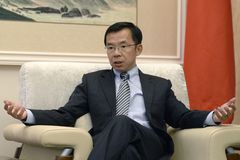