Conservative Leader Andrew Scheer dismissed more calls for his resignation, shaking the criticisms off as an “unfortunate” feature of Conservative Party politics.

On Wednesday, The Globe and Mail reported that a new group had formed to push Mr. Scheer to quit immediately and launch a leadership race. Called Conservative Victory, the group is run by prominent Ontario-based Conservatives.

“I am staying on to fight the fight that Canadians elected us to do,” Mr. Scheer said Thursday, adding that “now is not the time for internal divisions.”

“That is an unfortunate part of the Conservative tradition in this country,” he said.

The latest high-profile Conservative to call on Mr. Scheer to quit is Stephen Harper’s former campaign director Jenni Byrne. She told the CBC on Wednesday that staying on was not in the interests of Mr. Scheer or the party.

One of the founders of the Conservative Victory group is Ontario Premier Doug Ford’s election campaign manager Kory Teneycke. Mr. Ford told reporters in Toronto Thursday he’s “not involved in that at all.”

Since his election loss last month, Mr. Scheer has had criticism levelled at him from social conservatives and progressives. Some members in Ontario and Quebec are also upset that the party fared poorly in their provinces. In response Mr. Scheer has been staking out a response that he hopes will ensure his position in the party.

As part of that, the Conservative Leader on Thursday announced that Liberal-turned-Conservative MP Leona Alleslev will be his new deputy leader. Ms. Alleslev, who crossed the floor to the Conservatives in 2018, represents the riding of Aurora-Oak Ridges-Richmond Hill north of Toronto.

However, some party supporters criticized Mr. Scheer for appointing a rookie over a party veteran. Ms. Alleslev is so new to the Conservative Party that last year she donated to both the Liberals and the Tories.

“I’m all for lavishly feting a new member of the family, but this is taking the matter too far,” Dan Robertson, who worked for the Conservatives while Stephen Harper was in power, wrote on Twitter.

Mr. Scheer told reporters Ms. Alleslev’s appointment shows the party is “moving forward. Leona embodies exactly the type of person that we are trying to reach out to.”

He said she will help to win over people who have voted Liberal in the past but are upset with Prime Minister Justin Trudeau.

Ms. Alleslev, who was standing next to Mr. Scheer during the news conference, did not speak to reporters.

Alberta MP Michael Cooper defended her appointment, calling her a “smart, dedicated member of caucus.” He noted that Ms. Alleslev switched sides at a time that wasn’t politically convenient because it was well before the SNC-Lavalin affair and Mr. Trudeau’s slide in the polls.

Conservative MP Alain Rayes decided to stay on as Quebec lieutenant to ensure the province’s concerns are heard in the upper ranks of the party. There are 10 MPs from Quebec in the 121-member Conservative caucus.

But despite this decision, Mr. Rayes said he is not taking sides in the debate over Mr. Scheer’s future. “I am not the one who will decide. It will be up to the members in April, or to the leader between now and then,” he said in an interview.

Mr. Rayes, who had been a key organizer for Mr. Scheer in the 2017 leadership race, said he is well aware of the level of discontent among party members, in particular over social issues such as abortion and same-sex marriage.

“It is obvious we need to find a way to deliver our message differently, and that the message must be authentic. It didn’t work in the last election, the leader is aware. I have talked to him personally about this,” Mr. Rayes said.

He added he hopes the issue is resolved in the short term: “We want to move on to other things and work on what unites us as Conservatives.”

As Mr. Scheer tries to hold onto his job, he recently fired two senior aides and is conducting a cross-Canada listening tour. At a campaign post-mortem meeting in Montreal on Monday, he was directly told by participants to resign but he told reporters on Thursday that party members and caucus support him.

“I will be making the case to our members that we need to stay united and stay focused and I will be seeking a mandate to do that in April,” he said. 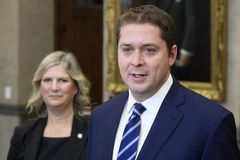 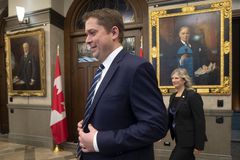 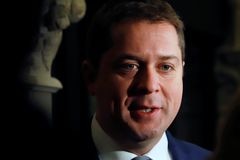