Conservative Leader Andrew Scheer survived a critical leadership test Wednesday night as MPs voted against giving themselves the power to oust him, in their first meeting since losing the election.

The vote from caucus follows weeks of speculation about Mr. Scheer’s leadership. Since their second place finish, Conservatives have publicly and privately speculated about their leader’s future. But while the caucus decision gave him a reprieve, party members will still vote on his leadership at an April convention in Toronto.

Mr. Scheer got an earful from MPs and senators in a meeting that lasted seven hours, three hours longer than expected, as Conservatives aired their grievances behind closed doors. In a press conference with reporters, Mr. Scheer described it as a “frank” discussion and suggested the problem the campaign faced wasn’t with what they were pitching to Canadians but with how it was communicated.

“Nobody is more disappointed in the results than me and nobody is more eager to get it right the next time,” Mr. Scheer told reporters as he underscored his plans to stay on as leader.

Opinion: Scheer lives to fight another day, but is the writing on the wall?

While he acknowledged discontent with the result, Mr. Scheer noted that the Conservatives grew the size of their caucus and won the popular vote. The Liberals won 157 seats in last month’s election, compared to the 121 seats won by the Conservatives and Prime Minister Justin Trudeau was returned to government with a strong minority.

“Conservatives only win when we are united. And we always lose when we’re divided," Mr. Scheer said in a bid to quell the whisper campaign around his future.

During the brief press conference, he was flanked by dozens of MPs and senators who repeatedly broke into applause and cheered as he answered questions.

While the majority of Conservative MPs declined to comment on the meeting, those who did only gave positive responses. "It was awesome,” Conservative MP Karen Vecchio said.

MP James Bezan said he wouldn’t talk about the meeting, but said the caucus is “very united.”

The leader will go out on what the party is calling a listening tour to hear from local campaigns and meet with party members from across the country. At the same time, former Conservative cabinet minister John Baird will lead the party’s election campaign review.

Mr. Scheer said he hopes to hear the results from Mr. Baird’s review as soon as possible.

The Conservative Leader accused Mr. Trudeau of running a campaign that “set the stage” for the regional divisions that resulted from the election. He took issue with how long Mr. Trudeau is taking to reconvene Parliament. He said it should be recalled as soon as possible and the Prime Minister should put national unity and challenges in the oil patch among his top priorities.

Heading into the meeting, MPs and senators sounded off on Mr. Scheer’s senior staff, the Conservative campaign’s strategy, Mr. Scheer’s handling of sensitive issues like abortion and same-sex marriage, and his personal style.

“Throughout the campaign, my constituents expressed concern about our leader; they continue to communicate with my office in that manner," Alberta MP Ron Liepert told reporters heading into the meeting Wednesday. He added that he’s pleased to see that Mr. Scheer is going on a listening tour across the country, saying “we’ll see what happens."

“We should have done better,” Mr. Liepert said about the election.

“The question is whether Mr. Scheer can be better in the next campaign. My answer is yes. Can he be better with the team that he had in the war room? My answer is no,” Mr. Boisvenu said.

Defeated MP Lisa Raitt has said the Conservative’s climate-change plan was a “big issue” during the campaign. But Mr. Scheer made it clear that he will double down on his party’s plan which many scientists said would fall well short of Canada’s emissions targets.

“As long as I am leader of this party, our party will oppose a carbon tax," Mr. Scheer said.

He said the Conservatives had a solid plan for the environment and that the feedback he heard in the meeting was that the party needs to do a better job communicating that plan.

On the issue of abortion and same-sex marriage Mr. Scheer repeated comments that he used throughout the election campaign – something some Conservatives have criticized.

Asked what his message will be on abortion and same-sex marriage going forward, Mr. Scheer said: “that every single Canadian has inherent value and that Conservatives always fight for fundamental freedoms of all Canadians regardless of their race, religion or sexual orientation.”

Opinion
Andrew Scheer lives to fight another day, but is the writing on the wall?
Subscriber content
November 6, 2019 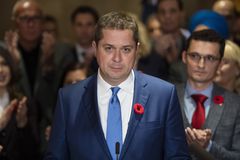 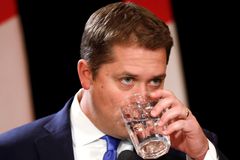 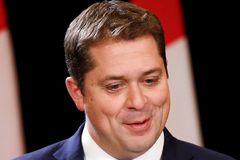