Outgoing Conservative Leader Andrew Scheer says his replacement must quickly put together a strong team in the Commons and for the next campaign, and he’s happy to offer whatever advice needed on that score.

But there are two other pieces of advice he hopes whoever is elected later this month will also find a way to heed: the need for a leader to communicate authentically and to break through into the cities and suburbs whose voters are essential if the Tories are to win a majority government.

“That is the critical ingredient,” he said Wednesday in a wide-ranging interview with The Canadian Press on what was his last day in the House of Commons as Opposition Leader.

His failure to win that majority sparked both an internal and external debate in the aftermath of the 2019 federal election that eventually led Mr. Scheer to resign, pending the result of the Conservative leadership race.

The vote is finally coming to an end Aug. 21, after being delayed by the COVID-19 pandemic, and four candidates are in the running: current MPs Erin O’Toole and Derek Sloan, former cabinet minister Peter MacKay and Toronto lawyer Leslyn Lewis.

Mr. Sloan and Ms. Lewis both come from the social conservative wing of the party. Both have promised that if they do win, they would include legislation curtailing access to abortion on their agenda.

Though Mr. Scheer promised he’d never allow a Conservative government to bring forward legislation on abortion, his own social conservative views on the subject were a flashpoint during the campaign.

Mr. MacKay once infamously called them an “albatross” hanging around the party’s neck.

Mr. Scheer dodged a question Wednesday on whether, if an avowed social conservative is elected as the next leader, the party would just find itself stuck dealing with the subject anew.

He said he still believes a prime minister can be a social conservative, and it’s only under the current Liberals that people who hold those views have come to be demonized in the public square.

Mr. Scheer is only the second permanent leader the Conservative Party of Canada has had since it was formed in a merger of the Canadian Alliance and Progressive Conservatives.

Stephen Harper became the leader of the new party in 2004, and would go on to lead the Tories through a succession of minority governments before winning a majority in 2011.

In the majority years, Mr. Scheer – who had first been elected an MP from Regina in 2004 – served as Speaker of the House of Commons, but when the Tories lost power in 2015 and Mr. Harper resigned, he decided to try for leadership.

“We ended up seeing a bit of a division, a potential division after the last leadership,” said Alberta MP Matt Jeneroux.

Mr. Scheer said Wednesday he does consider that an accomplishment, and a challenge that his replacement will face.

The race this time, by all accounts, has been far nastier inside caucus than in 2017.

But the context is also different than when Mr. Scheer took the helm that year.

The unprecedented situation forced by the COVID-19 pandemic means the next leader, if elected prime minister, could inherit a government with a historically high deficit, among other major economic and social challenges.

For a party that’s built its brand on keeping government small and costs down, it will require thoughtful policy, Mr. Scheer said.

“Many on the left are going to try to use the pandemic as a justification for a return to the failed policies of the past,” he said.

“One of the things I believe the next leader of the party here, and advocates for free market economics around the world, will have to do is rewin the battles that we won in the eighties.”

Then, communist and socialist states in Eastern Europe and elsewhere were flailing against the economic growth taking place in capitalist societies, he said, making it clear that the recipe for success isn’t more government intervention but letting people and markets take the lead.

“What we have to do in our party here in Canada is find a way to communicate that message in a way that people can appreciate and support,” he said.

The next leader needs to be mindful of the true communications challenge posed by political life, he said.

“You have to maintain your authenticity and still allow who you are to flow through and connect with people,” he said.

“But it’s also a very difficult environment because you have to always be polishing a message.”

One message that Mr. Scheer said he heard loud and clear late last fall was that he was missing too much in the lives of his five children.

It was a late-night kitchen conversation with his teenage son, Thomas, that cemented his decision to step down, a conversation that came as the fact he was using party funds to pay for their private school tuition was becoming a public issue.

That his kids were pulled into the political morass is part of the job, he said, but he hopes they will take away from the entire experience that politics can be a positive force.

“You go through a lot of criticism online, in the media, from your opponents but you can also have a tremendously positive impact on your community,” he said.

Mr. Scheer said he will remain the MP for Regina-Qu’Appelle, and will serve in whatever capacity the new leader requests. 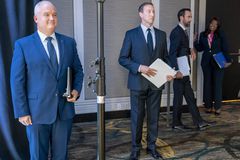 Opinion
Derek Sloan tries to be a Canadian Trump – and that may be his downfall
Subscriber content
August 5, 2020 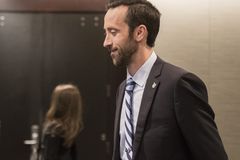 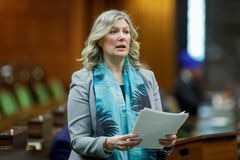