As parliamentarians prepare to return Tuesday from a 10-day break, Mr. Trudeau is facing increasing heat over Ms. Wilson-Raybould’s resignation from cabinet and a Globe and Mail report on Feb. 7 that, when she was attorney-general, she faced pressure from the Prime Minister’s Office to override the decision of the Public Prosecution Service of Canada and stay prosecution of SNC-Lavalin in favour of a deferred-prosecution agreement that would avoid a trial.

On Sunday, Mr. Scheer said in a Twitter post that the Prime Minister has “offered no answers and still refuses to waive privilege to let Ms. Wilson-Raybould speak.”

One option would be to have Conservative and independent senators launch their own committee hearing in order to have a more thorough investigation than the one the Liberal-dominated Commons justice committee is prepared to accept, Mr. Scheer said in an interview aired Sunday on CTV’s Question Period.

The Commons justice committee is set to meet Tuesday and the Conservatives say they will press again for the committee to call Ms. Wilson-Raybould and top staffers at the Prime Minister’s Office, including principal secretary Gerald Butts, to testify.

The Conservatives in the red chamber would need the support of the Independent Senate Group – who were largely appointed by Mr. Trudeau but sit as independents – in order to make a reference to the committee to consider the SNC affair and the role of the Prime Minister’s Office.

Independent Senator André Pratt, a member of the Senate legal and constitutional affairs committee, said he is willing to consider holding such hearings, but would need to be persuaded it is within the committee’s mandate.

“Is it the Senate’s job to investigate such a matter? I am not certain,” he said in an e-mail Sunday. “I am also concerned that some would use such an inquiry for the sole purpose of scoring partisan points. On the other hand, it is an important issue and it does not appear that the House of Commons’ Justice committee will be able to get to the bottom of it.”

Such an inquiry would be in keeping with the unelected chamber’s role to be “a check on executive power,” said Conservative Senator Linda Frum, who was a member of the committee until changing assignments this month.

“I absolutely believe the Senate can play a valuable role in this matter by holding open and transparent hearings either in the Legal committee or in the Senate Committee of the Whole,” Ms. Frum said Sunday in an e-mail. “If there cannot be an open and transparent process on the House side then the Senate must act on behalf of the Canadian people to find out the truth in this very serious matter.”

The Liberal caucus meets Wednesday, and it remains an open question whether the government’s leading Indigenous member of Parliament will continue to sit with the government.

Public Services and Procurement Minister Carla Qualtrough echoed the Prime Minister’s comment from last week that, if Ms. Wilson-Raybould had concerns about undue pressure, she should have taken them to him.

“I feel that if I had ever felt any kind of pressure that was undue or untoward, that I had an obligation to go to the prime minister,” she said on CTV’s Question Period. She added, however, that she would like Ms. Wilson-Raybould to remain in caucus. 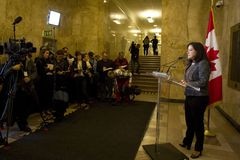 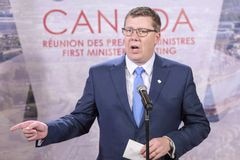 Opinion
If Trudeau doesn’t address the SNC-Lavalin affair soon, the fallout could cost him an election
Subscriber content
February 12, 2019 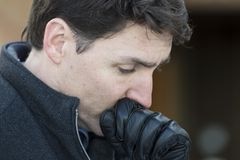