Conservative Leader Andrew Scheer announced on Friday that, if elected, his party would bring in a new five-year mandatory prison sentence for individuals who possess smuggled firearms, as well as a five-year mandatory minimum for violent gang crime.

It is a “sacred duty” for a prime minister to keep citizens and streets safe, Mr. Scheer said, adding that Liberal Leader Justin Trudeau has “failed" in this regard.

“We will vigorously defend these [mandatory-minimum] sentences against legal challenges,” he said.

The Liberals left them largely untouched, but the Supreme Court has ruled that some key provisions, such as a three-year minimum for illegal gun possession, and five years for possession by people with repeat weapons offences, amount to cruel and unusual punishment, and are therefore unconstitutional.

Lower courts in several provinces have struck down many mandatory minimums, creating a patchwork of rules, as these decisions apply only in the province where the ruling was written.

Eric Purtzki, a Vancouver criminal lawyer, said adding more mandatory-minimum sentences contradicts the court’s message that judges should be permitted to use their discretion, and that there are always exceptional cases that do not fit the minimums.

“The Supreme Court of Canada and courts across the country have been quite clear that these mandatory-minimum sentences are very constitutionally vulnerable,” he said in an interview.

He added that they are also unnecessary, because, he said, “the courts are already handing out significant sentences for these types of crime.”

During the course of the election campaign, Conservatives have been critical of the Liberal proposal to allow provinces and cities to ban handguns, noting that the Canadian Association of Chiefs of Police does not support handgun bans.

Mr. Scheer has said that his party will go after the “real criminals” and make it harder for gangs and drug and gun traffickers.

In response to the Conservative announcement, Mr. Trudeau summed up the party’s proposal as an attempt “to weaken gun control” while the Liberals want to “strengthen gun control.”

Mr. Trudeau, who campaigned on Friday in Quebec City, said a re-elected Liberal government would ban and buy back up to 250,000 military-style assault rifles in addition to letting municipalities impose individual handgun bans.

The Liberal plan would also suspend gun licences for people suspected of posing a danger to their families, toughen gun-storage laws and crack down on people who buy guns legally and divert them to illegal markets.

The New Democrats have promised to do more to stop gun-smuggling, and the Greens say they would further restrict handguns to shooting ranges in urban areas.

Mr. Scheer also faced questions on holding dual Canadian-U.S. citizenship after The Globe and Mail reported the news on Thursday. He said he is in the process of renouncing his status as an American citizen.

“It’s not a big deal for Canadians to have dual citizenship,” Mr. Scheer said in response to a question on how many times he filed tax returns in the U.S.

A campaign spokesman said Friday that Mr. Scheer registered for military service in the United States when he turned 18, as required by law of dual citizens.

Mr. Scheer had raised questions about the dual allegiance of former governor-general Michaëlle Jean before she gave up her French citizenship to assume the country’s highest post.

In a 2005 blog post, Mr. Scheer asked his constituents whether it was appropriate for Ms. Jean to hold dual Canadian-French citizenship.

“I asked my constituents a question about whether it mattered to them, it was not an attack at all,” he said in an interview with CP24 in Toronto on Friday.

Holding dual citizenship shouldn’t “disqualify” anyone from running for election, Mr. Trudeau said on Friday, but he criticized the Conservative Leader for not pro-actively disclosing the information.

Mr. Trudeau also confirmed on Friday that his view on abortion has changed since 2011, when he told The Canadian Press that he was personally against abortion but also pro-choice.

“I evolved past that particular perspective," he said. "I no longer feel that I can or need to say that I am against abortion.”

For his part, NDP Leader Jagmeet Singh campaigned in Saskatoon on Friday, where he touted the party’s plans to introduce national universal pharmacare by 2020.

Green Party Leader Elizabeth May spent time in her Vancouver Island riding for an all-candidates debate, as well as party announcements and events. On Saturday evening, Ms. May is scheduled to rally with candidates and supporters in Nanaimo, B.C.

The latest national numbers from Nanos Research has the Liberals at 36 per cent and the Conservatives at 34 per cent – a gap that falls within the margin of error. The NDP is at 14 per cent, followed by the Greens at 8 per cent, the Bloc Québécois at 6 per cent and the People’s Party of Canada at 1 per cent.

The poll was sponsored by The Globe and Mail and CTV, with a total of 1,200 Canadians surveyed from Oct. 1 to Oct. 3. It has a margin of error of 2.8 percentage points, 19 times out of 20. Respondents were asked: “If a federal election were held today, could you please rank your top two current local voting preferences?” A report on the results, questions and methodology for this and all surveys can be found at tgam.ca/election-polls. 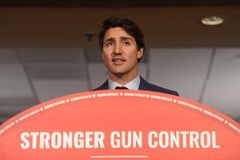 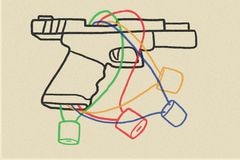 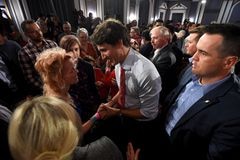 Follow Kristy Kirkup, Janice Dickson and Sean Fine on Twitter @kkirkup @janicedickson @seanfineglobe
Report an error Editorial code of conduct
Due to technical reasons, we have temporarily removed commenting from our articles. We hope to have this fixed soon. Thank you for your patience. If you are looking to give feedback on our new site, please send it along to feedback@globeandmail.com. If you want to write a letter to the editor, please forward to letters@globeandmail.com.
Comments