Conservative Leader Andrew Scheer declined to answer numerous questions on Saturday about whether his party hired an outside firm led by Warren Kinsella to “seek and destroy” Maxime Bernier and the People’s Party of Canada.

Mr. Scheer, who was campaigning in the Greater Toronto Area on Saturday, said his party will not make comments on “vendors that we may or may not have engaged with.”

Federal election 2019: The definitive guide to the issues and party platforms

“As a rule, we never make comments on vendors that we may or may not have engaged with,” he said.

The Globe and Mail reported Friday that Mr. Kinsella and his Daisy Group consulting firm worked on a secret campaign to “seek and destroy” the fledgling People’s Party of Canada and keep Mr. Bernier out of the national leaders’ debates.

The records make several references to a “client” for the project, including sending a bill for payment, but the client’s identity is not revealed in the documents.

A source with direct knowledge of the project said the client listed in the documents is the Conservative Party of Canada. The Globe is keeping the source’s name confidential because they were not authorized to discuss the matter.

The activity appears to have taken place prior to June 30, when new rules took effect requiring third parties to disclose their political activities. It is legal for parties to hire outside firms to assist with political campaigns. Detailed campaign expenses are not disclosed until after the election.

At a Saturday news conference, Mr. Bernier said he had filed a complaint with Elections Canada.

“This is the kind of dirty politics that fuels Canadians’ cynicism about politics,” he said.

Mr. Kinsella, a former Liberal adviser and now outspoken critic of Liberal Leader Justin Trudeau, has previously said he worked briefly this year for the Green Party of Canada.

In a phone interview, he declined to say whether he worked for the Conservative Party this year.

Late Saturday, Mr. Kinsella issued a lengthy statement saying he will be pulling back from media and the work that was done “ended many months ago”.

It was always going to be disclosed by law, he said.

"It was in no way inappropriate or wrong," Mr. Kinsella said. "Opposing organized bigotry is always appropriate and right."

Mr. Kinsella said if someone wants to join forces with him to beat Mr. Bernier he "will always welcome it."

"And the client who wanted to expose and oppose bigotry? They deserve credit, not criticism," he said.

Liberal Leader Trudeau attacked the Conservative campaign’s tactics on Saturday when asked about The Globe’s story in Hamilton, Ont.

“We’ve seen throughout this campaign that the Conservatives have had to use the politics of fear and division and indeed just make stuff up in order to try and get their message across,” he said.

Speaking to a crowd of about 350 supporters, Mr. Trudeau urged Canadians to vote Monday with the long-term future of the country in mind.

“I think this is an election that is more important than just the next four years,” Mr. Trudeau said.

“It will decide whether Canada continues to step up on the greatest challenge of our time, the fight against climate change.”

For his part, Mr. Scheer has made a pitch to Canadians for a majority mandate while he has called on Mr. Trudeau to explain “exactly which taxes might go up” in the event the NDP and Liberals move to form a coalition in a minority government scenario.

“One thing Canadians can be sure of is the deficit will be higher and taxes will go up and this will be the coalition that Canadians cannot afford,” he said.

“Those are things that the Conservative party is going to have to respond to,” he said while he campaigned in west-end Vancouver.

Mr. Singh also faced questions about whether he would be permitted to travel to India if he becomes prime minister.

In 2014, the country banned him from obtaining a visa and he confirmed he hasn’t applied for one since.

He added that he will always stand up for human rights.

The federal leaders have shifted into high-gear for the final weekend of the campaign, with a series of whistle stops and rallies across the country.

Mr. Trudeau spent Saturday in ridings held by the Conservatives and NDP in southern Ontario. He made stops in Niagara Falls and Brantford, where Conservatives currently hold seats, and in an NDP riding in Hamilton.

Mr. Scheer spent Saturday in the vote-rich GTA, including at a rally in Richmond Hill, Ont.

During the event, some supporters began to chant “lock him up” as Mr. Scheer raised Mr. Trudeau’s handling of the SNC-Lavalin controversy.

The Conservative Leader quickly addressed the crowd and motioned for them to stop, adding that “we’re going to get to the bottom of the scandal.”

Mr. Scheer has promised to launch a inquiry into the matter should his party form government.

“We’re going to vote him out,” he said before he urged the crowd to chant “vote him out.”

Mr. Singh campaigned in B.C. on Saturday, along with Green Party Leader Elizabeth May.

In the lead up to Monday’s vote, the Liberals and the Conservatives have remained neck-and-neck in the polls and both parties hope the final push on the hustings will improve their final seat count.

Meanwhile, nightly tracking in Quebec suggests the Bloc Québécois is on the rise. A survey released by Nanos Research on Saturday shows the BQ at 31.06% support in the province, behind only the Liberals at 35.97%. The NDP is at 13.19% in Quebec, followed by the Conservatives at 10.33 %, the Greens at 7.74% and the People’s Party of Canada at 0.92%.​

The poll was sponsored by The Globe and Mail and CTV, with a total of 1,200 Canadians surveyed from Oct. 16 to 18. It has a margin of error of 2.8 percentage points, 19 times out of 20. Respondents were asked: “If a federal election were held today, could you please rank your top two current local voting preferences?” A report on the results, questions and methodology for this and all surveys can be found at tgam.ca/election-polls.

With files from Michelle Zilio and Janice Dickson 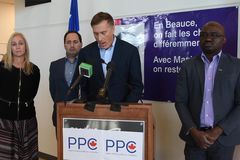 Follow Kristy Kirkup, Bill Curry and Tom Cardoso on Twitter @kkirkup @curryb @tom_cardoso
Report an error Editorial code of conduct
Due to technical reasons, we have temporarily removed commenting from our articles. We hope to have this fixed soon. Thank you for your patience. If you are looking to give feedback on our new site, please send it along to feedback@globeandmail.com. If you want to write a letter to the editor, please forward to letters@globeandmail.com.
Comments