The Senate has voted to amend a motion that would have called Prime Minister Justin Trudeau’s national security adviser to testify in Parliament, instead recommending such matters be dealt with behind closed doors.

That means national security adviser Daniel Jean likely won’t be called to appear at committees in either the House of Commons or the Senate to testify about Mr. Trudeau’s trip to India.

The Trudeau government has been under increasing pressure to allow Mr. Jean to appear at a parliamentary committee to explain a background briefing he gave to reporters in which he suggested factions within the Indian government may have orchestrated the presence of Jaspal Atwal, a B.C. Sikh convicted of trying to kill an Indian cabinet minister in 1986, at official events in India.

Last week, Conservative MPs orchestrated a 20-hour filibuster to put pressure on the government after the Liberal majority rejected a Conservative motion to call Mr. Jean to committee. The Liberals have in recent days accused Conservative Leader Andrew Scheer of “willful blindness” for turning down his own classified briefing on the subject, while the Conservatives have accused the government of a cover-up.

Peter Harder, the government’s representative in the Senate, introduced an amendment this week to a Conservative motion that called for Mr. Jean to appear at the Senate’s national security and defence committee to answer questions about Mr. Trudeau’s recent trip to India.

Members of that committee must obtain security clearance and swear an oath that they will maintain for the rest of their lives the confidentiality of the information they receive, although they could file a vetted public report afterward. The amendment was passed mostly by independents with a handful of Senate Liberals. There were five abstentions on Wednesday’s vote, including from three senators who sit on that committee. All the Conservative senators present voted against the motion, as did independents Mike Duffy, Pamela Wallin, David Richards, Stephen Greene, Josée Verner and Diane Griffin.

“The majority in the chamber want to keep partisan politics out of the chamber, particularly when it comes to national security issues,” Mr. Harder said after the vote.

“I’m glad to see that the amendment, which respectfully refers this to the appropriate parliamentary committee, won the support of the majority of senators.”

The Senate has yet to vote on the motion itself. It is possible another amendment could be made to call Mr. Jean again, but Conservative Senator Leo Housakos said that likely won’t happen.

“Disappointing, not surprising, to see all the Trudeau senators ... got up and provided cover for this government on this particular issue,” Mr. Housakos said.

“They expressed a clear lack of willingness to do what is right and transparent.”

Before the vote, independent senator André Pratte said he felt Conservatives were on a “fishing expedition,” because their original motion also called for additional witnesses from the RCMP, Global Affairs and CSIS. “I would agree if they were just to ask for Mr. Jean to testify,” Mr. Pratte said. Instead, he said, “it looks like a partisan trick to me.”

“I felt that that it was more appropriate in these circumstances that a security adviser not be put in that particular position before a committee,” Mr. Wetston said.

When asked whether he felt pressure to vote in a way that would protect the Trudeau government, he said: “Not one bit. Not one scintilla of that.” 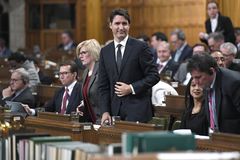