Canada has granted asylum to two of the people who housed whistleblower and U.S. fugitive Edward Snowden in Hong Kong, but is facing calls to take in the other five “Snowden refugees” whose Canadian asylum claims remain in bureaucratic limbo.

Vanessa Rodel and her seven-year-old daughter, Keana Nihinsa, arrived at Toronto Pearson International Airport Monday night after a flight from Hong Kong. The Filipino refugees will make their way to Montreal Tuesday, where they will settle into their new lives with the support of a non-profit group that privately sponsored them to come to Canada.

Robert Tibbo, a Canadian lawyer, represents the Rodels and the five other Snowden refugees. He is urging the Liberal government to provide refuge to the other five people, who are of Sri Lankan origin and who sheltered Mr. Snowden in Hong Kong.

In 2013, Mr. Snowden was on the run and landed in Hong Kong after leaking classified information about the U.S. National Security Agency’s programs, which collected private information on millions of people. Mr. Snowden soon fled Hong Kong but was stopped in Russia, where his passport was confiscated. He was granted asylum by the Russian government and remains there today.

“They all helped out on something extraordinary in helping Mr. Snowden, making their decisions of conscience to provide him shelter, humanity and empathy," Mr. Tibbo said.

“It’s a bit like their bond [as a group] is now broken … It’s been broken by Canada."

In a tweet Monday, Mr. Snowden also called on the Canadian government to resettle all of the asylum claimants who housed him in Hong Kong.

“Thank you to everyone, in Canada and around the world, who made this possible. After so many years, the first of the families that helped me has a future. But the work is not over – with solidarity and compassion, Canada can save all of them," reads the tweet, which was written in French.

A spokesman for Immigration Minister Ahmed Hussen declined to comment on the asylum cases for privacy reasons. Mat Genest said that, generally speaking, privately sponsored applications are normally processed on a “first-in, first-out basis,” but noted that cases may be expedited in exceptional circumstances.

Ms. Rodel fled her home country of the Philippines after allegedly being raped and sexually trafficked by the New People’s Army − the armed wing of the Communist Party of the Philippines. She and her daughter, who was born in Hong Kong and is considered stateless, are the first Snowden refugees to be granted asylum after hiding Mr. Snowden when he fled to Hong Kong.

He hired Mr. Tibbo, a former Montrealer who was working in Hong Kong as an immigration lawyer. After a brief stay at a hotel, Mr. Snowden spent two weeks shuttling between three refugee families who were Mr. Tibbo’s clients, including the Rodels.

Ajith Pushpa Kumara, a former Sri Lankan soldier who says he was tortured after deserting the army, also took in Mr. Snowden for some time, as did Supun Thilina Kellapatha (who alleges as well that he was tortured in Sri Lanka), his wife and child. Mr. Kellapatha and his wife have had another child since hiding Mr. Snowden; both children are considered stateless.

Mr. Tibbo said he explained who Mr. Snowden was to his clients and they were eager to assist the American.

“These families, it was part of their modus operandi, that they helped other newly arrived asylum seekers," Mr. Tibbo said. “They saw he was distressed and they recognized him as being in a similar position to what they were when they were fleeing for their lives from their home countries.”

Since the refugees’ involvement with Mr. Snowden rose to global prominence in 2016 – including in scenes in a Oliver Stone film on the fugitive – Mr. Tibbo says they’ve faced harassment for their role in the matter. He said they’ve been questioned by welfare authorities, seen welfare benefits cut and had visits from police.

Knowing Hong Kong’s reputation as a difficult jurisdiction in which to seek refugee protection, a Canadian non-profit group called For the Refugees applied to privately sponsor all seven of the “Snowden refugees.” The Rodels’ applications were approved by the Canadian government in January, but kept secret until Monday for security reasons.

Mr. Tibbo said Ms. Rodel was shocked when he broke the news to her earlier this year.

Three other lawyers flew to Hong Kong to meet the Rodels and accompany them to Canada. The refugees and their lawyers will speak to the media Tuesday. 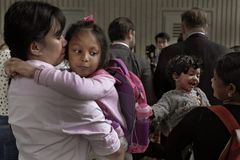 Group asks Canadian court to expedite applications of refugees who hid Snowden
July 17, 2017
Families who hid Snowden in Hong Kong ask Canada to fast-track asylum requests
May 15, 2017
Follow Michelle Carbert on Twitter @michellecarbert
Report an error Editorial code of conduct
Due to technical reasons, we have temporarily removed commenting from our articles. We hope to have this fixed soon. Thank you for your patience. If you are looking to give feedback on our new site, please send it along to feedback@globeandmail.com. If you want to write a letter to the editor, please forward to letters@globeandmail.com.
Comments