Some social conservative groups say Andrew Scheer can’t stay on as Conservative Party leader because he failed to defend their beliefs during the federal election campaign and are rallying their members to help ensure his ouster.

Mr. Scheer secured the leadership of the Conservative Party in part by winning the late-ballot support of party members who had initially supported more socially conservative candidates. Now, as he faces an April leadership vote and mounting pressure from the progressive wing of his party, it’s unclear he will be able to again rely on support from the right wing of the party’s base.

“A lot of social conservatives have no interest whatsoever in backing Andrew Scheer," ex-Conservative MP and defeated leadership candidate Brad Trost told The Globe and Mail. “We feel we are being made the whipping boy for his communications blunders.”

Mr. Trost, along with the Campaign Life Coalition and evangelical Christian leader Charles McVety, all told The Globe the Conservatives need a new leader. And the anti-abortion group, Right Now, which ranked Mr. Scheer as its second choice during the leadership race, said it is taking a “wait-and-see” approach before making its own decision.

Mr. Scheer’s office said it didn’t have a comment on the criticism.

During the election, the party came out with “confusing and garbled” messages on abortion and abortion funding, said Alissa Golob, the co-founder of Right Now. She said Mr. Scheer’s position that the party would continue to fund overseas abortions through foreign aid, was against party policy and his position on whether MPs would be able to introduce anti-abortion legislation was unclear.

“I think he could have done better,” Ms. Golob said.

Mr. Scheer dodged questions about his beliefs on abortion for more than a month before publicly acknowledging that he is personally against it. That made him look weak and indecisive, according to Jeff Gunnarson, the president of Campaign Life Coalition. The group gave Mr. Scheer a B-minus rating in the leadership race, behind Mr. Trost and another candidate.

“If you’re not strong enough to hold one position or another, you’re just not going to make it,” Mr. Gunnarson said, calling Mr. Scheer’s attempt to walk in both the pro-abortion and anti-abortion camps a “recipe for disaster.”

“I think he would make a terrific MP," Mr. Gunnarson said, noting that until he was leader Mr. Scheer had a “perfect” voting record on social conservative issues.

However, Conservative MP Garnett Genuis defended Mr. Scheer’s election performance, saying he was clear in his abortion policies and tried to strike a balance between competing demands within his own party.

Mr. Genuis also said Conservative policies, such as proposed tax breaks for adoptions, were a nod to anti-abortion activists who want to see alternatives to abortion made more accessible. Mr. Genuis said he is anti-abortion but doesn’t describe himself as a social conservative.

According to Campaign Life Coalition, the Conservatives elected 46 anti-abortion MPs, three more than it had before the election.

Mr. McVety said Mr. Scheer was hostile towards social conservatives. He said the leader should resign because he lost a winnable election.

The president of the Canada Christian College said he leads 1,100 pastors and the group is "mobilizing Christians across the country” for an eventual leadership race that he says is guaranteed whether Mr. Scheer resigns now or waits until Conservative Party delegates vote on his future at the April convention.

But Mr. Genuis said a leadership race would set the party well behind in its preparations for the next election and he rejects suggestions that the election was the Conservatives’ to lose, noting it’s rare to oust a majority government after its first mandate.

He defended Mr. Scheer’s record, saying he moved the party “forward significantly” in the election and “kept our party united." 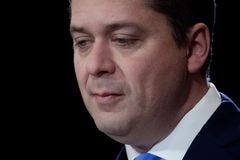 Trudeau meets with Scheer after announcing Parliament will reconvene on Dec. 5
November 12, 2019 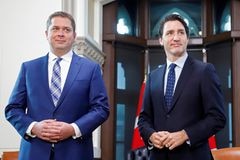 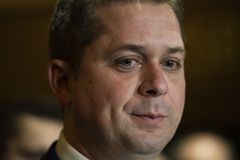