Speaker Anthony Rota has ruled that the conduct of a Liberal MP who urinated during virtual parliamentary proceedings constitutes a prima facie case of contempt of the House of Commons.

In a ruling Monday, Rota said at first glance Quebec MP William Amos breached the privileges of his fellow MPs last month when he urinated while his computer camera was on – an incident that was broadcast on the internal parliamentary feed of proceedings and not seen publicly.

As such, Rota said the matter is deserving of further examination by the procedure and House affairs committee.

He noted that Amos has apologized, saying he didn’t realize his camera was on, and that he has stepped aside from his role as a parliamentary secretary and promised to seek unspecified “assistance.”

Nevertheless, Rota ruled: “There is no dispute about the facts in question, and they constitute a serious breach of the rules of decorum and an affront against the dignity of the House.”

The ruling was in response to a question of privilege raised by Conservative MP Karen Vecchio.

Immediately after Rota’s ruling, Vecchio moved that the matter be referred to the procedure and House affairs committee. Her motion passed without a vote and none of Amos’s fellow Liberals raised any objections.

That was in stark contrast to the way Liberals rallied around Amos in April, when he was caught naked on the internal parliamentary video feed. In that incident, Amos said he was changing his clothes after a jog and didn’t realize his camera was on.

A screenshot of a naked Amos was quickly leaked to the media and broadcast around the globe. Bloc Quebecois MP Sebastien Lemire admitted taking the screenshot but said he didn’t know how it wound up in the media.

The Liberals had been pressuring Lemire to reveal with whom he shared the photo and were even threatening a possible police investigation into the publication of an intimate photo without consent. But they abruptly dropped that approach once word of Amos urinating on camera came to light.

On Monday, Rota reminded MPs that virtual proceedings are “an extension of the proceedings of the House and that their conduct must respect our rules and practices, even if they are participating remotely.”

“I want to reiterate, yet again, the importance of everyone adjusting to the temporary measures put in place in response to the pandemic and exercising continued vigilance to prevent such incidents from recurring. As soon as a member connects to a virtual sitting and opens their camera, they are considered to be, for all intents and purposes, in the House.”

“Obviously, when we have a case of someone literally exposing themselves to the House on two different occasions, that is a pretty serious matter,” Richards said.

He suggested it’s part of a pattern of “degradation of decorum and behaviour” that has occurred since the advent of hybrid sittings – where most MPs participate virtually in Commons proceedings while only a handful are physically present in the chamber – in a bid to prevent the spread of COVID-19.

“I think people get more relaxed and more comfortable because they are at home or in their own offices and sometimes forget that they are still in proceedings of the House of Commons,” Richards said.

Errant MP in trouble for second ‘shocking’ incident during parliamentary Zoom call
May 28, 2021 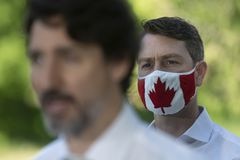