Canada Infrastructure Bank chief executive officer Pierre Lavallée says there is strong private-sector interest in Via Rail’s efforts to expand passenger-rail service as Ottawa and the bank announced $71-million to finalize the plan.

Tuesday’s announcement means the project now enters an 18-24 month “preprocurement” phase that will include environmental assessments and First Nations consultations along the proposed 850-kilometre route from Quebec City to Toronto. The government would then make a final decision on whether to go ahead with construction.

Work will also focus on the details of how increased Via Rail traffic will interact with the already busy downtown train stations in Montreal and Toronto. Specifically, some of the money will go toward track work in Montreal’s Mont-Royal tunnel to ensure that Via’s heavy rail trains can share the tunnel with the new commuter light-rail system – the Réseau Express Métropolitain (REM) – currently under construction.

Most of the money – $55-million – will come from the Canada Infrastructure Bank, an arm’s-length agency created by the Trudeau government to support large-scale, revenue-generating infrastructure projects that are in the public interest and that can attract private investors, such as pension funds.

“This is far more than a study,” Mr. Lavallée said in an interview on Tuesday. “I think it’s important to make the difference between studies and detailed planning and preprocurement activities. This is a lot more detail, a lot more specific. This is what leads to being able to call for tenders on construction and having people who perform that work being willing to commit to a certain work package and pricing and so on.”

The bank participated in meetings over the winter with large institutional investors to assess whether they would invest in the project.

“I think there’s strong interest and I think they’re looking forward to seeing more from the joint team that we announced today, together with Via Rail,” he said.

Via Rail’s proposal for what it calls high-frequency rail (HFR) would involve constructing a dedicated passenger rail line from Quebec City to Toronto through Trois-Rivières, Montreal, Ottawa and Peterborough, Ont., so that passenger trains no longer face delays by sharing rail lines with freight traffic.

The federally owned passenger-rail service has said the project would cost about $4-billion, or $6-billion if the line was built to run trains on electric power.

Tuesday’s announcement represents the third project that the bank has supported financially since it was created in 2017. It is already investing in Montreal’s REM and the GO Expansion project to boost commuter rail frequencies in the Greater Toronto and Hamilton Area.

Bank officials and Via Rail will now form a new joint project team that will work with transit authorities in Montreal and Toronto to review how the various systems can work together.

The announcement was made at a news conference in Trois-Rivières on Tuesday by Transport Minister Marc Garneau, Infrastructure Minister François-Philippe Champagne, Via Rail Canada president and chief executive Cynthia Garneau and Mr. Lavallée.

Mr. Garneau said on Tuesday that the reviews to date have focused on whether there is public demand for increased passenger rail and whether there is private-sector interest in investing in the project. He said the response was positive on both fronts.

“This is very serious,” he said. “It’s not just another study. We are moving into a critical phase for this project.”

Passenger-rail advocates say Canada is well behind its international peers when it comes to building rail links between major urban centres and have urged Ottawa to move more quickly in assessing Via Rail’s plans.

Paul Langan, founder of the advocacy group High Speed Rail Canada, says Via and the federal government should be more transparent about where the line will run, where it will stop along the way and exactly how trip times will improve.

Via has said the system will improve travel times by 25 per cent, but Mr. Langan notes that there are no public details available to support that claim.

“Nobody has seen the ever-changing plan yet, so I am happy there will be a consultation requirement,” he said on Tuesday after the announcement. “Doing this additional work should give a very clear picture of what exactly Via Rail is trying to do and how they expect to do it.” 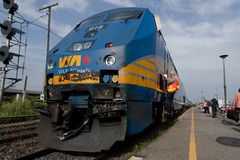