The Supreme Court of Canada confirmed on Friday that Bruce Carson, a one-time senior aide to former prime minister Stephen Harper, is guilty of influence peddling for lobbying federal officials on behalf of a water-treatment company.

The ruling upheld a 2017 conviction by the Ontario Court of Appeal, which had overturned Mr. Carson’s initial acquittal in 2015. Mr. Carson, now in his early 70s, was Mr. Harper’s chief policy analyst between 2006 and 2009.

The case goes back to Mr. Carson’s efforts in 2010 and 2011 to win contracts from First Nations communities for H2O Professionals, which would have paid any commissions to his then 22-year-old fiancée.

The RCMP charged Mr. Carson with influence peddling in 2012. Following Friday’s ruling, the next step in this case will be the sentencing of Mr. Carson.

“This whole thing has hit him quite hard financially and otherwise,” said his lawyer, Patrick McCann.

In his defence, Mr. Carson argued that any contract that could have come from his work with H2O would have been awarded by First Nations communities and not through the federal government.

“At trial, [Mr. Carson] took the position that his assistance was not ‘in connection with a matter of business relating to the government,’ ” said the ruling written by Judge Andromache Karakatsanis, who quoted from the Criminal Code offence at the heart of the case.

In its 8-1 decision, the Supreme Court found Mr. Carson could have benefited from his contacts in government, whom he tried to persuade to launch a pilot project that would have favoured H2O.

“While government approval was not required for First Nations to purchase the systems sold by H2O, [Indian and Northern Affairs Canada] could have facilitated these purchases, for example, by changing its funding terms and conditions to H2O’s benefit. It also could, and sometimes did, participate in and fund pilot projects involving water-treatment systems for First Nations communities,” the ruling said.

Mr. Carson’s lawyer said the ruling will have repercussions throughout the lobbying community, given the broad interpretation that was used in this case.

“My first impression is that anybody that will do business with entities that receive government funding will have to take care in how they approach it,” said Mr. McCann.

Still, Ottawa-based lawyer Scott Thurlow, who advises clients on lobbying rules, said the real lesson from this case is not to hire someone based on their perceived contacts within government.

“As a client, I would look very skeptically at any lobbyist who says ‘I have influence with the government’ as a marketing pitch,” he said. “When lobbyists make their pitches to prospective clients, they should be as vigilant as possible about making a case on its merits. Now, what they say and how they say it to bring new clients on board has a clear test.”

Mr. Carson was charged by the RCMP with demanding a benefit for Michele McPherson in exchange for helping H20 do business with the department. Ms. McPherson was Mr. Carson’s fiancée.

“The agreement specified that she would receive this commission regardless of whether the First Nations or the Government of Canada paid for the systems. The appellant demanded this commission in exchange for promising to use his government contacts to help H2O sell its products to First Nations,” the Supreme Court ruling said. 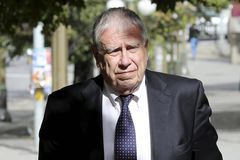