While this week’s federal election left the country largely where it started, the results reveal small but important changes in where parties are drawing their support and what issues may have driven the outcome.

Without exit polling in Canadian elections, it can be difficult to pinpoint exactly who voted and which party received their support, but the riding-by-riding results offer a glimpse into how a range of regional and demographic differences affected the outcome.

The re-elected Liberals relied predominantly on urban and suburban ridings for their support and won in ridings with, on average, higher proportions of visible minorities (32 per cent) and recent immigrants (9 per cent), according to a Globe and Mail analysis. About 60 per cent of Liberal votes came from ridings with medium-to-high population density; just 16 per cent came from the most sparsely populated ridings.

Conservative support skewed rural, with 30 per cent of the party’s votes coming from ridings in areas with the lowest rate of population density and another 31 per cent in areas with low-to-medium density. The party’s ridings have the second-lowest proportion behind the Bloc Québécois of visible minorities and new immigrants, on average, at 10 and 4 per cent, respectively. And those percentages had decreased since 2019.

Support for the New Democrats and Greens came from ridings that are more evenly distributed in terms of population density, while both the Bloc and People’s Party’s votes were smallest in densely populated urban ridings.

NDP candidates were elected in ridings with, on average, the lowest household incomes, while the Greens and Bloc were also below the national average.

Initial turnout was about 58.6 per cent of registered voters, with about 850,000 mail-in ballots still to be verified and counted.

The campaign in Quebec was driven by complaints of “Quebec bashing,” particularly after the English-language leaders’ debate, but that did little to shift the results from two years ago. The provincial seat count was largely unchanged, particularly in Montreal, where the Liberals won nearly 60 per cent of the vote and kept the majority of seats.

During the campaign, the Bloc Québécois revived the party’s perennial call for more autonomy as it took aim at the Conservative plan to scrap the Liberals’ $6-billion child-care deal with the province.

Mr. Blanchet objected to the question and seized on it as another example of English Canada’s disdain for the province. The controversy coincided with an increase in the Bloc’s polling performance, and all three major national parties called on the broadcasters’ consortium to apologize.

Andrea Perrella, a political scientist at Wilfrid Laurier University, said Quebeckers have typically not had strong loyalty to any single party, swinging Liberal, Conservative, Bloc or NDP, depending on the election.

But he said issues related to Quebec nationalism can be enough to get the attention of voters regardless of their political persuasion, which is why the skirmishes over the leaders’ debate appeared to immediately help the Bloc.

“All it takes is a little agitation along the lines of Quebec nationalism to activate people,” he said.

“They may not necessarily be separatists, they may be happy to be Canadian, but they still identify themselves as nationalists. And when that identity is in some way questioned, naturally, the party that is more aligned with that will be the party that voters will more likely lean towards.”

Prof. Perrella also noted that the religious-symbol law in particular is a popular policy in Quebec, which forced the other party leaders to skate around the issue as they attempted to placate Quebeckers who were angry about how the province was portrayed while avoiding taking a firm position on the law itself.

The grievances that shut Justin Trudeau out of Alberta in 2019 – and fuelled a resurgent separatist movement after Mr. Trudeau’s re-election – haven’t gone away, but the Liberals and New Democrats managed to make small inroads in the province.

The Conservatives kept every seat in Saskatchewan but slipped in neighbouring Alberta, losing at least one seat each to the Liberals and New Democrats and earning a much smaller share of the vote than just two years ago. In Alberta, the Conservatives had 55 per cent of the popular vote, compared with nearly 70 per cent in 2019, while the party also saw its vote share fall in Saskatchewan. 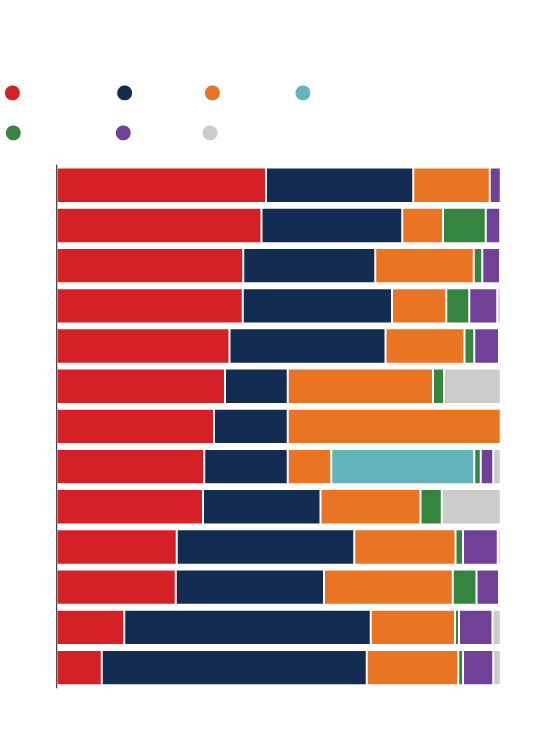 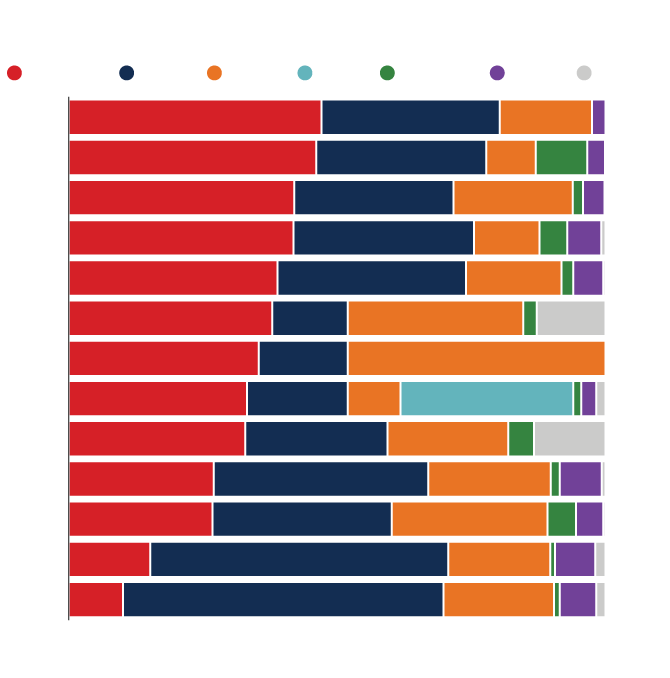 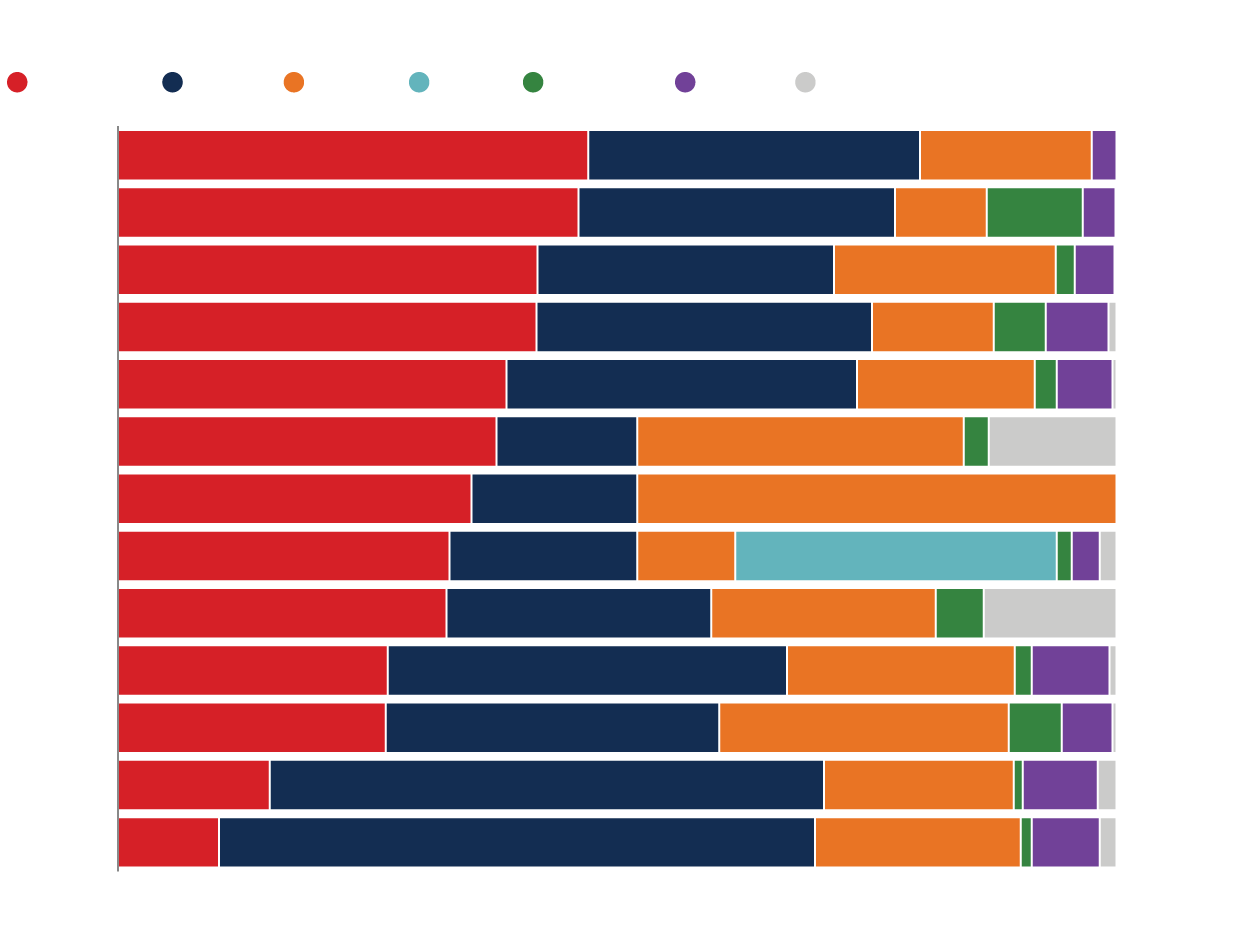 “It’s a dip for Conservatives and that is potentially significant,” said Lori Williams, a political-science professor at Mount Royal University in Calgary.

In 2019, Alberta Premier Jason Kenney had recently won a provincial election with a campaign that attempted to lay the blame for the province’s economic malaise at the feet of Mr. Trudeau. Public-opinion surveys showed a troubling proportion of people in the Prairies were questioning their place in the country, and the election result spawned a new separatist movement that called itself Wexit – since rebranded into the Maverick Party.

But a lot has changed in two years. The COVID-19 pandemic has made the province more dependent than ever on the federal government, while complaints over Mr. Kenney’s management of the pandemic, notably a fourth wave that is now filling up ICUs and overwhelming the health care system, rubbed off on Conservative Leader Erin O’Toole, an ally who had earlier praised Mr. Kenney’s handling of COVID-19.

At the same time, Mr. O’Toole’s move to the centre may have alienated social conservatives in Alberta, likely pushing some to Maxime Bernier’s nascent People’s Party, which earned almost 8 per cent of the vote in the province.

A lot of Albertans are still angry, but Mr. Trudeau and his government are no longer the sole target.

“Some of that anger [in 2019] was stoked by Jason Kenney to get elected and having made promises and raised expectations,” Prof. Williams said.

Prof. Williams also noted that Albertans are becoming more open to entertaining parties other than the Conservatives. The New Democrats, for example, placed second in the province with about 20 per cent – the party’s best performance ever.

The urban-rural (and suburban) divide

The Conservatives’ best chances for a breakthrough on Monday were suburban ridings, particularly in the 905 region near Toronto. It’s an area that was seen as central to former prime minister Stephen Harper’s rise to power and an area that Mr. Trudeau dominated in both 2015 and 2019.

But Mr. O’Toole failed to make significant inroads in the 905 region, or flip ridings in other suburban areas such as those around Vancouver.

While many rural and urban ridings have become safe, predictable seats for incumbents, the suburbs can be volatile places where voters have less attachment to specific parties, Prof. Perrella says. That makes those areas critical places to focus on but also incredibly difficult to manoeuvre.

“A suburban area is in between rural and urban,” he says. “It’s a totally different world, where you have homeowners struggling to keep up with the mortgage payments, they’re commuting. It’s unclear if that leads to a different value system, but it certainly makes them edgy in terms of when they vote.”

Prof. Perrella said all parties were clearly trying to court those voters, with policies such as tax cuts from the Conservatives, a national child-care program from the Liberals and various promises related to homeownership and affordability from all major parties.

In addition to those battlegrounds, Prof. Perrella said the Conservatives in particular have a difficult time balancing the need to maintain enthusiasm in rural ridings while trying to win over people in suburbs and larger cities.

The party failed to win a seat – or even come close – but its stronger-than-expected showing underscored deep divisions in the country, particularly with how the COVID-19 pandemic has been managed.

Mr. Bernier, a former Conservative cabinet minister who was kept out of the leaders’ debates, campaigned on cutting immigration while also railing against public-health restrictions, mask rules and vaccine passports.

His supporters were linked to increasingly hostile demonstrations against Mr. Trudeau, including an incident in which someone threw gravel at the Prime Minister. A former riding association president was charged with assault. PPC candidates were also regular fixtures at protests against vaccine mandates, including a large rally in Calgary this past Saturday where Mr. Bernier made an appearance.

The party captured more than 5 per cent of the vote – double the total for the Green Party but not enough in any single riding to win a seat. In some ridings, the party had a level of support that was greater than the Conservatives’ margin of loss, though pundits have cautioned against assuming that all PPC votes would have otherwise gone to the Conservatives.

Mr. Bernier placed second in his own riding with 18 per cent, and there were other ridings with second-place finishes, such as Portage-Lisgar in Manitoba, where the PPC candidate had about 20-per-cent support.

Still, Prof. Williams is skeptical that the PPC’s performance in Monday’s election is the start of a breakthrough with much staying power but rather a reflection of the moment.

“I don’t know that this is truly a party that’s on the ascent,” she said. “I think this is more a party that benefited from folks that were in this tiny minority who were really angry about pandemic restrictions, vaccine passports and masks.” 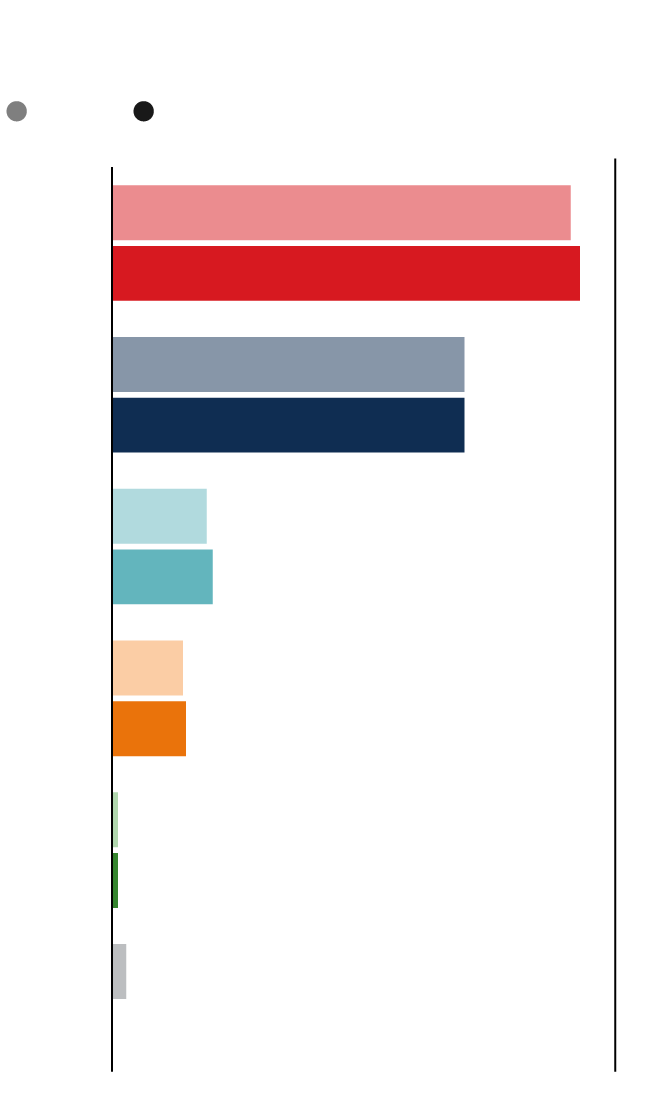 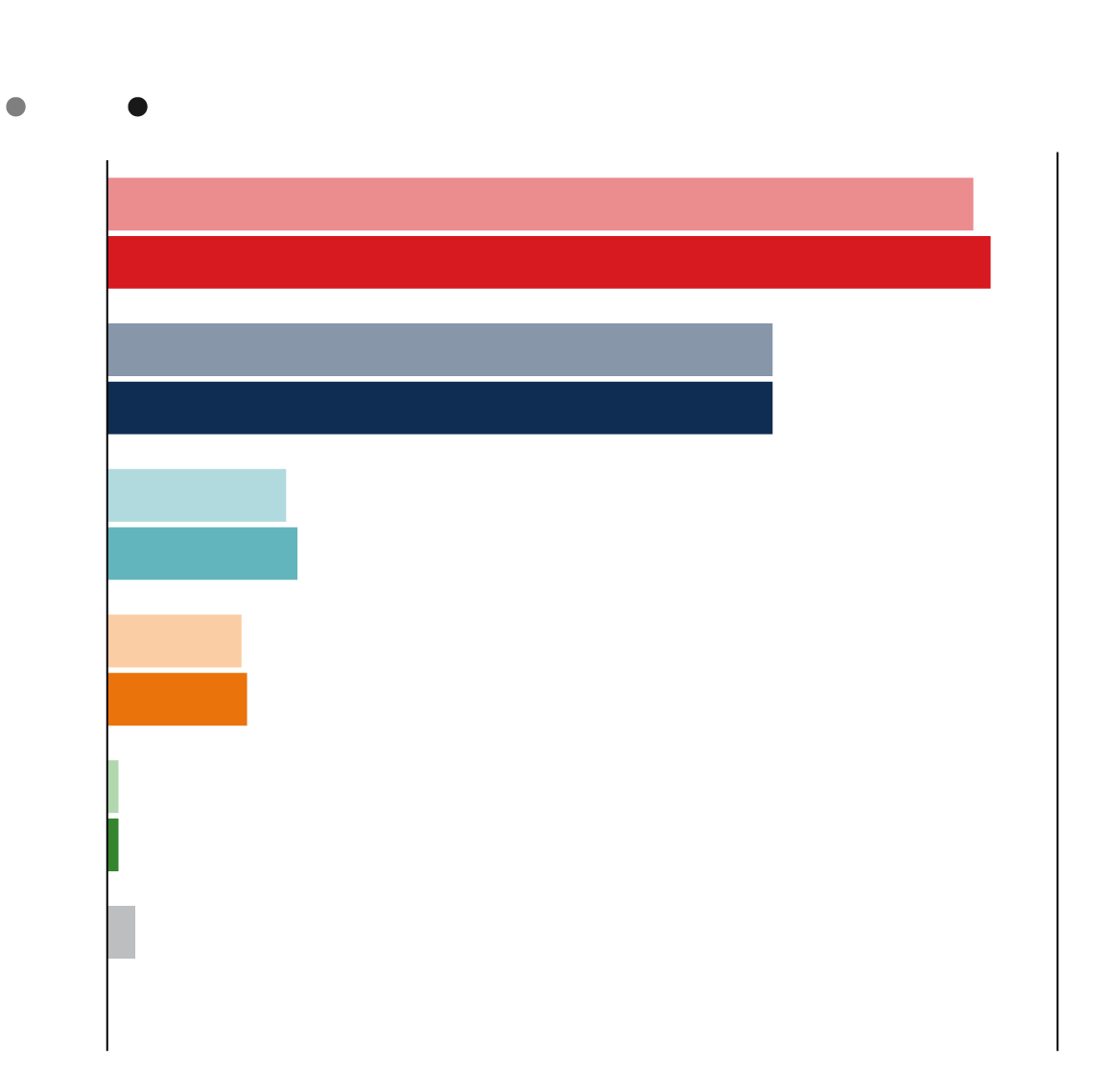 Climate change and the Greens

Climate change was a major theme in the 2019 election that coincided with a historic breakthrough for the Green Party, which won three seats under former leader Elizabeth May.

In contrast, the Greens entered this election in the middle of internal battles that challenged the leadership of Annamie Paul and speculation that the party could be left without any seats.

Climate change was overshadowed by other issues and Ms. Paul had a difficult time making the case that the Greens were the obvious choice to manage the issue, including when the former leader of the B.C. Greens, Andrew Weaver, publicly endorsed the Liberals’ climate plan.

Ms. Paul badly lost the riding of Toronto Centre, placing fourth, and the party was projected to win two seats.

Cristine de Clercy, who teaches political science at University of Western Ontario, said Mr. Trudeau ran a strong campaign in 2019 that presented the Liberals as champions of the environment. The controversy around the carbon tax, including a very public fight with Ontario Premier Doug Ford on the issue, likely burnished Mr. Trudeau’s environmental credentials in the minds of some voters.

“Trudeau did a good job in 2019 and since by owning this issue, and he’s pushed some of the Green Party’s primacy on environmental issues aside,” she said.

But perhaps the larger problem for the Greens is that the environment just didn’t get the same level of attention this time.

“This election was about many things, but climate change was not one of them,” she said.