A small group of Inuit known as the Ahiarmiut welcomed the construction in 1949 of a radio tower near Ennadai Lake in the interior of what is now Nunavut, the land they called home. It meant they could trade with the federal employees who worked there.

But bureaucrats in Ottawa had different ideas.

The Ahiarmiut, they said, who endured extreme deprivation when caribou herds were scarce, were becoming too dependent on the tower and the food security it offered. So, in the summer of 1950, without explanation or warning, the government relocated the Ahiarmiut to Nueltin Lake, about 100 kilometres away.

They were dropped on an island without food, shelter or tools. And they quickly began to starve.

“They sat there eating their clothes, they ate bark, they ate whatever they could find to eat until the lake froze,” says their lawyer, Steve Cooper. “The elders were dying and mothers were trying to breast feed with nothing but blood coming from their breasts.”

It was the first of multiple relocations for the Ahiarmiut, who are known to many other Canadians as Farley Mowat’s fictionalized People of the Deer. Each caused a loss of culture, a breakdown of families and, sometimes, death.

But today, 10 years after the Ennadai Lake Society started legal action to claim damages for all the Ahiarmiut have endured, Ottawa has given its legal team a mandate to settle.

David Serkoak, who lived through the relocations when he was a child and who created the Ennadai Lake Society (now called Ahiarmiut Relocation Society) 20 years ago, is hopeful. “Like a bad dream, it’s going to be over soon,” Mr. Seroak said, “hopefully with an apology from a government official, hopefully the Prime Minister.”

A spokesman for Carolyn Bennett, the Minister of Crown-Indigenous Relations, said the government’s goal is to reach a fair and just settlement that will help bring closure and a brighter future for the Ennadai Lake Ahiarmiut.

When the water on Nueltin Lake froze over, those Ahiarmiut who were still alive wandered back to the mainland and then trekked to their familiar grounds at Ennadai Lake.

But, in 1957, they were again relocated, this time to a place called Henik Lake, which was a couple of days walk from a Hudson’s Bay Company post in Padlei. Before they were forced onto the airplane, the government officials demanded the Ahiarmiut leave their tents and bulldozers were used to bury everything they owned.

At Henik Lake, “the government had set up tents for us already, for each family, and each tent had a starvation box, just enough basic food for you to survive for a few days or a week if you used the food wisely,” Mr. Serkoak said.

The food was quickly gone and some Ahiarmiut left.

Among those who stayed was a hunter named Hallauk, his wife Kikkik, their five children, and Kikkik’s half-brother Ootek. Mad with starvation, Ootek shot Hallauk in the back of the head while he was fishing and then tried to shoot Kikkik. She overpowered him and stabbed him until he was dead.

Kikkik started off with her five children through the snow to Padlei, carrying the youngest on her back and dragging two small daughters in a sled.

Weakened by hunger, she could not go the full distance. She dug a hole in the snow with a frying pan and buried the two girls who were in the sled, then set off again for Padlei with the remaining children.

When she arrived, the RCMP set off to find the missing girls even though Kikkik said they were dead. More than a day after they were abandoned, the police found the children. One had died, but one was still alive.

Kikkik was charged with the murder of Ooteck, the death of one daughter, and the neglect of the other. She was found not guilty on all charges.

Elisapee Karetak, a documentary filmmaker, was the baby that Kikkik carried on her back to Padlei. “I know my siblings were struggling for years and years and, one by one, we dealt with it and today we can talk about it without anger,” Ms. Karetak said.

There were three more relocations after Henik Lake, first to Arviat on Hudson’s Bay, then to a camp outside Rankin Inlet, then back to Arviat.

Today, the Ahiarmiut number about 150, although only 23 were among the group who were relocated. The rest are their descendants.

The oldest of the remaining 23 is Mary Anowtalik, who at 17 was featured on the February, 1956, cover of Life magazine, in an issue devoted to what it called living people of the Stone Age.

“She’s tired, she’s frustrated, she’s impatient now, but she’s still alive,” Mr. Cooper said of Ms. Anowtalik. “We know that the government has a budget to settle this thing. … We are anxious to get this done if, for no other reason – and there are many others – than Mary needs to be here when this thing is settled.”

Caribou tour in Nunavut added to list of Canadian Signature Experiences
July 8, 2015
Stuck in Yellowknife (and having the time of my life)
September 8, 2014 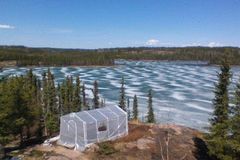 An apology for the Inuit five decades in the making
August 18, 2010 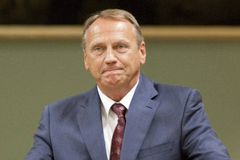