J.S. Woodsworth, a socialist, founded the Co-operative Commonwealth Federation in 1932 to protect workers from the greed of company owners. NDP leaders Tommy Douglas and Ed Broadbent were his true heirs. Jack Layton brought the movement, much diluted, to the brink of government.

But the forklift operator, the cashier, the courier, the office assistant and whoever still works at whatever mills and factories remain can no longer look to the left as their champion. Its leadership is consumed by a civil war over race and privilege and gender, over colonialism, cultural genocide, defunding the police.

Few on the left pay much attention any more to “the little guy,” as Ontario Premier Doug Ford calls them, which is why so many of what we used to call the working class in North America and Europe have migrated to conservative parties.

Even in the days of Woodsworth, of course, society was divided by more than labour versus capital. Today we are fractured in so many different ways that it’s hard to keep up.

Economic security divides us. I’ve written about “the public class, who live on the avails of taxation, and the private class, who pay the taxes.” A different way of putting it might divide the work force between those with secure jobs, benefits and pensions – in the public or private sector – and those who lack that security.

Last month, after yet another poll delivered this result, Ben Woodfinden, a doctoral student at McGill University, tweeted: “I suspect you’ll see lots of framing of ’Conservatives have a female voter problem’ but much less ’Liberals have a male voter problem.’”

Opinion: Kids should be back in school – for their sake and for ours. Perfection isn’t necessary

Opinion: Small class sizes are pricey, but the alternative might cost Alberta more

Education divides us. Last week, in The New York Times, Michael J. Sandel, a political philosopher at Harvard, wrote about “credentialism”: the belief by those who hold a university degree that they are better qualified to be in charge than the nearly two-thirds of Americans who lack one.

Credentialism, he wrote, “devalues the contributions of those without a diploma, fuels prejudice against less-educated members of society, effectively excludes most working people from elective government and provokes political backlash.” U.S. President Donald Trump was the beneficiary of that backlash.

Age divides us. The old have always been more conservative than the young, even as society evolves toward greater social tolerance. The young are forever trying to talk the old into accepting new and more enlightened ways, while the old try to keep the young from going too far.

Today, millennials say, “Okay, boomer,” with a sneer. Is that simply the age-old contest between the generations, or is ageism the last acceptable form of discrimination? Either way, in our relentlessly aging society, every year there will be more old people seeking better pensions, health care, home care and long-term care and fewer young people available to do the work and pay the costs.

Geography divides us. Recent polls show the Liberal Party leading or at least competitive with the Conservative Party in Ontario. The Conservatives rack up huge leads in Alberta and Saskatchewan. In Quebec, the fight is once again between Liberals and Bloc Québécois.

There is a gulf between the Prairies and Ontario, with the former more likely to celebrate individual initiative over collective action and fiscal discipline over social experiment.

Can these divisions be synthesized? Perhaps, partially, with many exceptions. People living in affluent city centres are disproportionately credentialed, economically secure and committed to social equality. This is the natural habitat of progressives, who look (down) upon conservatives as ignorant at best or a collection of -ists and -phobes at worst.

Non-Indigenous people in rural areas are less likely to be credentialed and more likely to be economically insecure, older, and white and Christian and proud of it. Here be many conservatives, who loathe the progressives’ smug superiority and sense of entitlement.

Both groups can be found within the vast suburbs in which more than two-thirds of Canadians – including most immigrant Canadians – live today. Here, values mingle, compete, clash: enclave against enclave, one mall for one tribe, another for another.

No matter how you define what divides us in the third decade of the 21st century, suburbs are the battleground.

Opinion
COVID-19 is severing a lifeline of immigration Canada needs to survive. Here’s what we can do to repair it
September 3, 2020 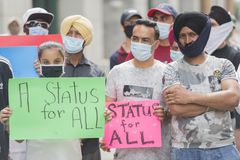