Canada has suddenly developed a good-cop, bad-cop approach to China. Both cops are named Dominic Barton. Neither are named Justin Trudeau.

The problem with that is not that the Prime Minister’s tone is too diplomatic, but that he failed in his duty to do some diplomacy.

Mr. Barton, the former McKinsey & Co. global managing partner chosen by Mr. Trudeau as Canada’s ambassador to Beijing, gave a group an unusually blunt appraisal of Beijing – including saying China’s influence in the world had been hurt by its recent behaviour.

But when Mr. Trudeau was given the opportunity at a news conference Wednesday to say whether he agreed with his ambassador’s assessment, he forgot to use the words that the situation demanded: the names of Michael Kovrig and Michael Spavor.

The two were imprisoned by China in retaliation for the arrest of Huawei executive Meng Wanzhou – a move designed to bully.

If ever there was an opportunity to do some public diplomacy, and press the Canadian interest in their release, it was here, all teed up by Mr. Barton.

Mr. Trudeau didn’t have to drop all of his silver-tongued charm. But when asked whether China’s bad behaviour was hurting its own influence, he should have seized the opportunity to say that the arbitrary detention of Mr. Kovrig and Mr. Spavor had, of course, shaken the perception of China among Canadians, and many other people in the world. He didn’t even mention them.

Instead, he responded with the now-familiar, cautious lines about calls to investigate China’s COVID-19 response: that eventually there should be a review of many countries, including China. He’ll support an investigation, but he’s not sticking his neck out to campaign about China.

Okay. Prime ministers are advised to step carefully in international relations, especially with superpowers. Conservatives criticize Mr. Trudeau for being too soft on China, but in power, Stephen Harper’s ministers were careful and occasionally effusive.

Mr. Trudeau is already getting an earful from business interests and farmers’ lobbies who want him to butter up Beijing. So it wouldn’t be too surprising if the PM was delegating tougher talk to Mr. Barton.

Mr. Barton, once McKinsey’s Shanghai-based Asia chief, was appointed last year with the task of rebuilding Canada’s relationship with China. He was supposed to be a good cop.

What he is reported to have said behind closed doors to the Canadian International Council by people who attended sounds tougher.

Mr. Barton said he supports a “rigorous” review of the World Health Organization’s response to the pandemic – which means a review of whether China hid important facts from the world. And he said that China’s soft power – a foreign-policy term used to describe the goodwill or reputational assets that help a country influence others – has been damaged by its recent behaviour.

It is clear many European countries, and allies such as Australia, feel that way. Beijing is increasingly aggressive in its efforts to stop criticism from foreign countries, and that is fuelling fear of Chinese influence.

It was still new to hear Mr. Barton say it. Whether he intended for it to become public is less clear. But he probably did: His predecessor in Beijing, John McCallum, was sacked for saying overly conciliatory things in private meetings, and Mr. Barton is savvy enough to know things said to groups can leak.

For Mr. Trudeau, however, this was the wrong time to leave the game of good cop, bad cop to Mr. Barton.

It’s one thing to let others lead the calls for a coronavirus investigation. But Mr. Kovrig and Mr. Spavor are a Canadian grievance that has to be voiced consistently.

When the PM was asked if Beijing’s behaviour was damaging China’s soft power, it was an obvious opportunity to point to the two Michaels as the prime example, and do some public diplomacy. He might have cited an online Angus Reid Institute poll released earlier Wednesday that found Canadians’ opinions of China have plummeted.

The only minor leverage Canada has in pushing for their release is its own soft power, and the reputational damage done to Beijing when Ottawa raises the cases. Last year, Ottawa led a diplomatic campaign asking allies to press Beijing on the detentions. Failing to send that message consistently tells Beijing that the cost of their actions is not just small, but temporary.

No, Mr. Trudeau wasn’t too diplomatic. He failed to do diplomacy at all. 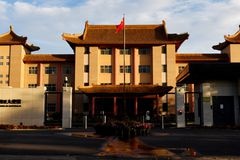