Travellers who board flights in Canadian airports or take trips on Via Rail trains will be required to provide proof of vaccination or a negative COVID-19 test starting on Oct. 30, the federal government announced Wednesday.

And, starting on Nov. 30, the testing option will be revoked and travellers will not be able to board flights or Via trains unless they are fully vaccinated – with rare exceptions.

Vaccinations will also be required for the hundreds of thousands of people who work in Canada’s public service, as well as those who work in federally regulated industries, such as banking. The new rules are part of an effort by the federal government, the largest employer in the country, to boost immunization rates in order to fight off fresh waves of COVID-19 infections.

Deputy Prime Minister Chrystia Freeland told reporters Wednesday that the vaccination requirements are meant “to ensure a minority of people cannot sabotage Canada’s economic recovery and cannot allow the fourth wave or other variants to cause real problems for us all.”

By Oct. 29, federal civil servants will have to either submit an attestation that they are fully vaccinated, or risk being placed on unpaid leave two weeks after the deadline, the government said. They will not be required to submit any proof of vaccination. Instead, there will be audits conducted to verify at least some of the attestations, officials told reporters at a background briefing.

The rules apply to core members of the civil service, including the RCMP. Officials said they expect Crown agencies and Crown corporations, which operate at arm’s length from the government, to impose similar rules, as they have done in response to all other federal health and safety directives announced since the pandemic began. The Canadian military, where vaccination rates already top 90 per cent, will also issue a directive mandating vaccinations.

Prime Minister Justin Trudeau told reporters the new measures are among the strongest in the world. “When it comes to keeping you and your family safe, when it comes to avoiding lockdowns for everyone, this is no time for half measures.”

Mr. Trudeau said there would be “severe consequences for anyone found to have been misrepresenting themselves.”

The Public Service Alliance of Canada, one of the country’s largest unions, said in a statement that, while it supports a federal vaccine mandate, the government “rushed their vaccination policy without meaningful consultation with the unions representing federal public service workers.” The union added that it was given “less than a single business day” to provide feedback.

“While the vast majority of PSAC’s membership is fully vaccinated, PSAC will continue to represent unvaccinated members who have punitive action taken against them as a result of their vaccination status,” the union said.

The federal government did not provide any new information about its plans to create a national vaccine passport document intended for international travel. It said travellers seeking to board planes and trains could use their provincially issued vaccination receipts or passports.

Federal public servants will be granted exemptions from the vaccine mandate only if they have medical or religious justifications, the officials said. They did not elaborate.

It is not clear whether there will be religious exemptions available for travellers. “After the transition period between October 30 and November 30, there will be minimal exceptions for very limited cases, such as for medical exemptions, or emergencies,” Allison St-Jean, press secretary for Transport Minister Omar Alghabra, said in a statement. “More specific details on the very limited exceptions will be provided, following consultation and engagement with stakeholders.”

It’s unclear how many Canadians might qualify for a religious exemption. Howard Levitt, an employment lawyer with Levitt Sheikh in Toronto, said he believes the number will be small.

“There are no significant mainstream religions, or even denominations within them, which prohibit any of the COVID vaccines. In reviewing religious exemption requests on behalf of multiple clients, the religious groups whose adherents have claimed exemptions as a result of being members have all been insignificant in numbers and often fringe,” he said.

“I would speculate that there are less than 10,000 Canadians out of a country of 38,000,000 which could legitimately claim a creed exemption.”

The government’s rules say someone is considered fully vaccinated two weeks after their second shot of a COVID-19 vaccine.

Officials at the background briefing said the vaccine mandates will be reviewed every six months, and that employees placed on unpaid leave will remain on leave until they get vaccinated or the policy is no longer required.

Federally regulated sectors, including the financial industry, airlines, rail companies and marine operators, will be required to implement rules that closely resemble the ones for public servants, government officials said. The vaccine mandate is expected to be in place in those sectors as of Oct. 30.

The government first proposed the vaccination rules on Aug. 13, just before the federal election campaign, but provided few details at the time. Officials noted on Wednesday that many companies have already imposed vaccine requirements, including Air Canada, WestJet and Canadian National Railway.

The travel rules will also apply to passengers on cruise ships and on trains operated by the Rocky Mountaineer rail-tour company in Western Canada. But the mandate will not apply to ferry passengers, or passengers on any other boat voyages shorter than 24 hours.

Mr. Alghabra’s office later said there may be modified requirements for Indigenous people in remote communities who need to access essential medical, health or social services away from their homes. “Modified requirements, including a testing alternative, will be explored for flights from these locations. We continue to engage Indigenous partners across the country to ensure that a proof of vaccination credential responds to the needs and rights of Indigenous peoples,” Ms. St-Jean, the press secretary, said in a statement.

The vaccine mandate will apply to all travellers who are 12 or older. Younger people are not yet eligible for vaccination in Canada.

As with the rules for federal civil servants, full vaccination will mean receiving a second dose at least two weeks before travel, the government said.

The mandatory vaccination rules do not automatically apply to Members of Parliament, because of long-standing Parliamentary privileges that say nothing can impede an MP from entering the House of Commons.

The Liberals say all their MPs are vaccinated except one – whom they did not identify – who has a medical exemption.

Mr. Trudeau took a shot at the Conservatives, who did not require their 2021 election candidates to be vaccinated against COVID-19.

“They will have MPs not able to get on planes to come to Ottawa if they are unvaccinated, and they will have MPs putting their fellow colleagues at risk in a large, but closed, windowless room in the House of Commons … This is a serious issue the Conservative Party of Canada is going to need to grapple with,” the Prime Minister said.

The Conservative Party declined to say Wednesday whether all of its caucus members are fully vaccinated. Conservative MP Michelle Rempel Garner said the party is reviewing the government’s vaccine mandates.

“Canada’s Conservatives support measures to keep Canadians safe and stop the spread of COVID-19. We are actively reviewing this policy,” she said in a statement.

The NDP has supported policies similar to those announced today by the Liberals. In a statement on Wednesday, NDP Leader Jagmeet Singh criticized delays in implementing the government’s mandates and developing a universal vaccine passport system.

Mr. Trudeau’s “selfish decision to call an election has delayed actions to help people get out of the pandemic,” Mr. Singh said.

More than 80 per cent of Canadians 12 and older have received two doses of a COVID-19 vaccine, according to covid19tracker.ca.

Looking to travel? Get ready to pay more for things like insurance and COVID tests
October 6, 2021 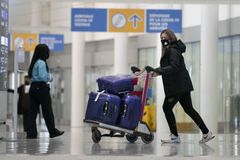 Tourism operators across Canada hoping travel picks up this fall and winter amid concerns over fourth wave
Subscriber content
September 29, 2021