Prime Minister Justin Trudeau has deplored the shooting of a Canadian-Palestinian doctor by an Israeli sniper and called for an independent investigation into Israel’s use of live ammunition against civilians.

Mr. Trudeau issued a statement on Wednesday decrying as “inexcusable” the use of “excessive force.”

“We are appalled that Dr. Tarek Loubani, a Canadian citizen, is among the wounded – along with so many unarmed people, including civilians, members of the media, first responders, and children,” Mr. Trudeau said in the strongest criticism his government has ever levelled against Israel. “Canada calls for an immediate independent investigation to thoroughly examine the facts on the ground – including any incitement, violence, and the excessive use of force.”

Dr. Loubani was shot in both legs by an Israeli sniper on the Gaza border Monday as clashes between Palestinian protesters and Israeli Defence Forces left at least 60 dead. More than 2,700 Palestinians suffered injuries, including 1,359 from live ammunition.

Israel had deployed two brigades and at least 100 snipers along the Gaza frontier as tens of thousands of Palestinians protested against the inauguration of the U.S. embassy in Jerusalem.

Explainer: What you need to know about the Gaza border violence and the global backlash against Israel

British Prime Minister Theresa May and United Nations Secretary-General Antonio Guterres have also called for an independent inquiry, expressing concern about the volume of live fire used by Israeli forces. The United States blocked the adoption of a UN Security Council statement on Tuesday that would have called for an independent probe. The United States blames the deaths on Hamas, the Islamist group that controls Gaza and which encouraged the protests.

The Israeli embassy in Ottawa said Mr. Trudeau’s statement was referred to the office of Prime Minister Benjamin Netanyahu. “We have asked Jerusalem for instructions, as this is a prime ministerial issue,” spokesman Itay Tavor said.

Avi Benlolo, president of Canadian Friends of Simon Wiesenthal Center, called Mr. Trudeau’s statement unbalanced and said he failed to condemn Hamas for inciting violence and "attempting to enter a sovereign nation to carry out terrorism.”

Mr. Trudeau did not say who should investigate the Israeli actions, but said Canada would reach out to international partners and international institutions.

University of Ottawa law professor Errol Mendes said Canada could ask the UN Human Rights Council to investigate because the United States has no veto over this body.

“But they have to move fast before the United States tries to stop it,” he said. Another option is the International Criminal Court in The Hague.

Canada calls for an immediate independent investigation to thoroughly examine the facts on the ground – including any incitement, violence, and the excessive use of force.

“The International Criminal Court actually does have the jurisdiction to investigate this, and I think they will,” Prof. Mendes said.

Mr. Trudeau said Canada has also demanded that Israel explain why Dr. Loubani, an emergency physician from London, Ont., and associate professor at the University of Western Ontario’s medical school, was shot by an Israeli sniper.

While Conservative Party Leader Andrew Scheer said he supports efforts to determine why Dr. Loubani was shot, he criticized the Prime Minister for putting the blame on Israel.

“In condemning the Israeli forces, Justin Trudeau ignores the role that the terrorist organization Hamas has played in inciting these clashes,” he said. “In responding to these events with nothing but criticism of Israel.”

Dr. Loubani, who was wearing a green surgeon’s outfit, said he was standing with orange-vested paramedics about 25 metres from the protesters when he was shot. Eighteen paramedics were wounded that day, including Dr. Loubani, and one killed in what appeared to be targeted Israeli shootings.

Dr. Loubani told The Globe and Mail in a phone call from Gaza that he was pleased that Mr. Trudeau has taken a strong position on “Israeli violence against peaceful Palestinian civilians.

“The call for an investigation is wanted and needed. We have to know how it came to be that Israeli soldiers were firing on peaceful Palestinian protesters and on medics, wounding so many and killing one,” he said. Dr. Loubani said he will recover from his wounds, but will require rehabilitation.

He said he used the opportunity in his conversation with Ms. Freeland to seek Canadian aid in helping Palestinian patients at Gaza City’s main al-Shifa hospital, where he regularly travels to teach emergency medicine. He was heartened that Ms. Freeland promised to consider his proposals for Canada to pay for solar panels at the hospital, he said.

“Those sorts of measures are the measures that will change the amount of desperation that Palestinians have and change the equation to make these types of protests less necessary in the future,” he said.

Dr. Loubani was in Gaza as part of a medical team funded by the South African-based Shuttleworth Foundation that is field testing 3D-printed medical tourniquets. He said he planned to leave Gaza on Friday.

Editor’s note: An earlier version of this article incorrectly said Justin Trudeau had demanded an answer as to why a Canadian doctor was targeted by Israeli snipers. He did not use the term targeted and in fact he asked for the independent inquiry to find out why Dr. Tarek Loubani was shot. 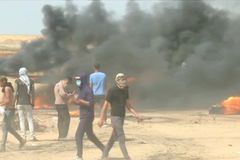 Canadian doctor shot by Israeli sniper near Gaza border
May 16, 2018 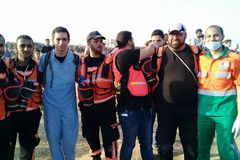 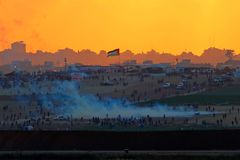 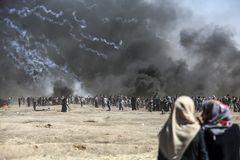