The Liberal Party of Canada is now on a pre-electoral footing after a convention in Halifax where the party sought to steal the NDP’s fire on policy issues and turned up the attacks against Conservatives.

Liberals presented themselves over the three-day event as advocates of positive politics, but they also started to take increasingly aggressive shots against opponents. The next election is 18 months down the road, in October, 2019, but it was top of mind for the 3,000 delegates gathered for the three-day event.

In a partisan speech to supporters, Liberal Leader Justin Trudeau depicted Conservative Leader Andrew Scheer as a replica of former prime minister Stephen Harper and the Conservative Party as a movement fanning the flames of divisive populism.

“The current Leader of the Opposition introduced himself to Canadians a year ago as ‘Stephen Harper with a smile,’ ” Mr. Trudeau said. “It may be Andrew Scheer’s smile, but it’s still Stephen Harper’s Party … The same policies, the same politics of fear and division. If anything, they’ve been emboldened by successful campaigns elsewhere in the world to divide people against one another.”

The Conservatives shot back that the Liberals are desperate after a series of controversial decisions and continuing deficit spending that have hurt their government’s standing with Canadians.

“They want to cast some people as the bad guys. This is not what this is about,” said Conservative MP Lisa Raitt. “This is about who shows Canadian families the best policies to make life more affordable for them. And Mr. Scheer will be talking about that.”

The narrative presented at the convention followed the advice of David Axelrod, the top strategist to former U.S. president Barack Obama. Speaking to Liberal supporters, he urged them to focus on a disciplined message, tout past achievements in addition to future plans and push back against opposition attacks.

Many speeches at the Halifax convention were focused on the middle class and sought to depict the Liberal Party as an inclusive movement. A key goal for party officials was to fire up volunteers and get them to continue knocking on doors and reaching out to millions of Canadians between now and the election.

Throughout the event, delegates offered a strong show of unity, avoiding public debates over the party’s policy direction.

In a secret voting process, the Liberal base prioritized resolutions that would create new and universal pharmacare and mental-health programs, decriminalize possession of small amounts of all drugs and revamp the sex-trade law. In addition, the party base voted in favour of changing bankruptcy laws to protect pensions and establishing a guaranteed minimum income.

As part of its re-election strategy, the Liberal Party wants to form a coalition of progressive voters with its left-leaning platform. In the case of pharmacare, Liberal MPs made it clear at the convention they wanted to adopt the resolution because the proposition will be a central plank of the NDP in the next election.

At a news conference before the 15 resolutions were officially adopted as party policy, Mr. Trudeau refused to state which ones will be included in the 2019 electoral platform. Still, he made it clear his government will not move toward the decriminalization of possession of small amounts of drugs, while signalling a keen interest in a form of enhanced pharmacare for Canadians. The federal government has already called on former Ontario health minister Eric Hoskins to develop a plan before the next election, with Liberal MPs calling for a universal, single-payer plan.

In addition to adding new elements to their program, the Liberals made a conscious decision to intensify attacks against the Conservatives, raising fears over the consequences of their eventual return to power. The Liberals are not directly comparing Mr. Scheer to Donald Trump, but they are still making an analogy between the Conservative base and some of the supporters of the U.S. President.

Speaking to reporters, Mr. Trudeau defended his decision to challenge Mr. Scheer’s vision for the country, while arguing he was stopping short of launching “personal” attacks.

“I will always be very clear, and unapologetic, about where I disagree on policy and on the choice to divide Canadians or play up the politics of fear or anger,” Mr. Trudeau said, accusing the Conservatives of engaging in American-style “aggressive nationalism.”

At no time in his speech did Mr. Trudeau refer directly to NDP Leader Jagmeet Singh. Still, the third-place party in the House is arguing that Canadians cannot trust the Liberals to follow through on their progressive agenda, pointing to past broken promises on electoral reform and a lack of action on guaranteed minimum income over the years.

“It’s a big show as they try to show how progressive they are, but the implementation, when they are in power, is just not there,” said NDP MP and parliamentary leader Guy Caron.

Attacking the Conservatives was a common theme of the final day of the Liberal convention. In a speech, Finance Minister Bill Morneau defended his government’s economic record in terms of job creation and growth, as well as the focus on women in the last budget. He went on to accuse the Conservatives of championing regressive policies.

“Our opponents still favour the failed policies that led to stark unemployment and the worst rates of growth since the Great Depression. … I can tell you a return to those policies, in my estimation, would be sheer – Scheer – incompetence,” Mr. Morneau said.

Earlier, Trade Minister François-Philippe Champagne also directly attacked Mr. Scheer in a speech on the inclusion of progressive values in commercial deals. Mr. Champagne said his government was ensuring that workers, women, Indigenous peoples and youth would benefit from free-trade deals, arguing the Conservatives are happy with the traditional way of doing business.

“Mr. Scheer seems to think [former prime minister] Stephen Harper’s old way is just fine for today, that benefits naturally trickle down to those disconnected from markets and without the tools to engage them,” Mr. Champagne said. 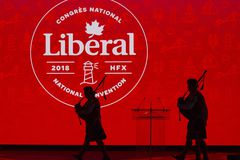 Liberal base fights for left-wing shift at national convention
April 20, 2018 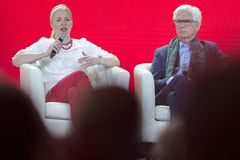 Opinion
Trudeau must win three fights, or he could lose to Stephen Harper 2.0
Subscriber content
April 22, 2018 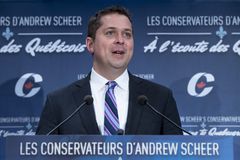