The Prime Minister has brought in former federal cabinet minister Anne McLellan as an unpaid adviser to help his government respond to growing western alienation and deal with the Liberal Party’s failure to win any seats in Alberta and Saskatchewan in last week’s election.

The Prime Minister’s Office announced on Tuesday that Ms. McLellan - an Edmonton-based lawyer - will be an adviser in coming weeks as Justin Trudeau forms a government against a backdrop of rising anger in the western provinces. Mr. Trudeau will also receive advice from Canada’s ambassador to Paris, Isabelle Hudon, on dealing with his party’s falling fortunes in Quebec, PMO spokeswoman Chantal Gagnon said.

Mr. Trudeau met with Governor-General Julie Payette on Tuesday to say he intends to form a government. He has already announced that the new cabinet will be sworn in on Nov. 20, but the date for Parliament’s return has yet to be set.

Since the election, Mr. Trudeau has been looking for a way to respond to the sense that the federal government has neglected the interests of the western provinces and treated the oil industry unfairly.

The Prime Minister spoke with all premiers after the election, and talked on Tuesday with the mayors of Saskatoon and Regina.

Saskatoon Mayor Charlie Clark said he urged the Prime Minister to lean on mayors and Indigenous leaders to ensure the region’s concerns are represented in the government. Mr. Clark said the election made it clear that people in Saskatchewan feel disconnected from Ottawa.

“The results were pretty stark in our province – there was a resounding sense of concern and frustration with the government,” Mr. Clark said in an interview. “It’s an indication that there’s some work that needs to be done for Ottawa to feel more like it’s a partner with our region.”

Mr. Clark said Mr. Trudeau did not indicate what he’s considering to address the lack of representation from Alberta and Saskatchewan.

Alberta Premier Jason Kenney welcomed Ms. McLellan’s appointment, calling her a “proud Albertan” who had a positive impact on Alberta’s oil sands when she was in federal cabinet. He addressed a question about her appointment in a live Facebook video broadcast Tuesday night.

“I think she gets it, she understands our economy and perhaps she can explain some of these issues to Prime Minister Trudeau that others have been unable to,” said Mr. Kenney.

“Perhaps she can persuade him that he really hurt Albertans when he attacked us in this recent election campaign.”

Still, Mr. Kenney said if Mr. Trudeau needs the insight of Albertans, he should consult with the United Conservative government that was elected this past spring. Mr. Kenney also repeated his threat to hold a provincial referendum on whether the equalization program should be removed from the Constitution if Ottawa doesn’t make adequate progress on the Trans Mountain pipeline expansion and repeal new environmental laws.

Some have suggested Mr. Trudeau could seek help from other current or former politicians in Alberta. Calgary Mayor Naheed Nenshi has been at the centre of that speculation, although he says he has not been asked.

Alberta’s Justice Minister, Doug Schweitzer, on Tuesday referred to Mr. Nenshi on Twitter as “Trudeau’s mayor” in response to Mr. Nenshi’s criticism of last week’s provincial budget. The tweet did not refer to the speculation about a federal role.

Ms. McLellan has experience dealing with western alienation. She was a minister from 1993 to 2006 under the Liberal governments of Jean Chrétien and Paul Martin. She worked with the Trudeau government on the legalization of cannabis and new rules for interactions with the Attorney-General after the SNC-Lavalin affair.

“I’m an Albertan and am someone who has spent 12 years in the Parliament of Canada, two of them with a minority Parliament," she said. "Hopefully, I will be able to, in some small way, assist the transition in relation to this government.”

Saskatchewan Premier Scott Moe has asked for a “new deal” for his province that would include cancelling the carbon tax, transforming the equalization program and getting natural resources to market.

Editor’s note: An earlier version of this article incorrectly said Anne McLellan was hired. In fact, she will be an unpaid adviser.

Anne McLellan: You do not create a regularized market in a year
Subscriber content
February 1, 2020 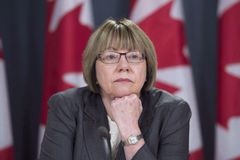 Former deputy prime minister Anne McLellan named Dalhousie chancellor
February 25, 2015
Follow Daniel Leblanc and James Keller on Twitter @danlebla @byjameskeller
Report an error Editorial code of conduct
Due to technical reasons, we have temporarily removed commenting from our articles. We hope to have this fixed soon. Thank you for your patience. If you are looking to give feedback on our new site, please send it along to feedback@globeandmail.com. If you want to write a letter to the editor, please forward to letters@globeandmail.com.
Comments