Justin Trudeau is trying to convince Canada’s ambassador to the United Nations, Marc-André Blanchard, to move to the Prime Minister’s Office as a high-powered adviser to play a similar role as former principal secretary Gerald Butts, sources say.

Mr. Blanchard, a politically connected former Montreal corporate lawyer, would offer Quebec a prominent voice in the upper echelons of the federal government, something that Liberals from the province – including Mr. Trudeau – have said was necessary.

Mr. Blanchard advised the Prime Minister on the formation of the cabinet, which included the appointment of Montreal MP Pablo Rodriguez as House Leader but also as Quebec lieutenant to handle political duties in the province. Mr. Blanchard did not respond to a request for comment.

Sources who have talked to him said Mr. Blanchard is leery about the move from the United Nations to Ottawa, particularly since he is deeply involved in the campaign to win Canada a two-year rotating seat on the UN Security Council, beginning in 2021-22.

The Globe and Mail is not identifying the sources because they were not authorized to discuss internal staffing matters that have yet to be announced.

Mr. Trudeau’s chief of staff, Katie Telford, and senior adviser, Ben Chin, will be staying on in the PMO. But a number of changes to the office are expected to be made shortly.

Mr. Blanchard, a former chief executive of the law firm McCarthy Tétrault, was part of Mr. Trudeau’s transition team after the 2015 election. In addition, he was one of the top advisers in the Quebec Liberal government of Jean Charest.

Mr. Trudeau is hoping to tap Mr. Blanchard to replace Mr. Butts, who has been one of his closest friends and advisers. Mr. Butts resigned during the SNC-Lavalin affair but came back to help the Liberal campaign leading up to the Oct. 21 election, in which the Liberals were reduced to a minority. He has not returned to the PMO.

Sources say the government is also considering the possibility of approaching former Conservative interim leader Rona Ambrose to replace David MacNaughton as Canada’s ambassador to the United States. Mr. MacNaughton stepped down from the position this summer.

The Prime Minister was impressed with Ms. Ambrose’s contributions to the NAFTA panel of experts that worked with then-foreign affairs minister Chrystia Freeland to advise the government during the contentious free-trade talks, sources say. Ms. Ambrose could not be reached for comment to see whether she would be interested.

One Liberal source said an added benefit of having Ms. Ambrose in Washington is she would not seek the Conservative Party leadership if Andrew Scheer leaves the position or loses a review vote in April.

The Liberals are looking to regain strength in Quebec after a disappointing result in the most recent election. While the Liberals remained in first place in the seat count and popular vote, the party lost a total of five seats, bringing its total down to 35. Meanwhile, the Bloc Québécois more than tripled its number of MPs, bringing it up to 32, on a promise to defend Quebec’s interests in Ottawa.

Mr. Trudeau has added three additional ministers from Quebec to his cabinet, bringing the number to 10.

Mr. Rodriguez’s role as Quebec lieutenant remains to be defined, but he said he will act as an intermediary with members of Quebec’s civil society, economic interests and political actors.

“The role of the Quebec lieutenant is to bring the unique sensitivity of Quebec in Ottawa and to sometimes explain to our colleagues what is happening at home and how to understand it,” he said last week.

Mr. Trudeau promised he would seek a spot for Canada at the UN Security Council when one of 10 temporary seats opens up. The UN vote is to be held next June and Canada is vying for a seat as part of the unofficial regional bloc called Western Europe and Other Groups; that bloc includes Norway and Ireland, which are also vying for one of the seats.

Sitting on the Security Council would give Canada prestige as a middle power, but it is uncertain whether Ottawa has the votes because of its criticism of Saudi Arabia over human-rights abuse and the diplomatic stand-off with China. 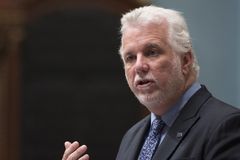