Canada’s prime minister spent his time at a summit of political and military allies underlining the need to present a united front against Russia, China and the general threat of authoritarianism.

Justin Trudeau was in Brussels on Monday attending a meeting of the North Atlantic Treaty Organization and then a Canada-EU summit.

Trudeau began his day by meeting with the president of Latvia, where the Canadian military is leading a NATO alliance battle group whose mission is to deter Russian aggression in the region.

The prime minister then sat down with NATO Secretary-General Jens Stoltenberg, where he said the alliance is entering a new chapter and that Canada has always been a defender of the North American alliance with Europe.

Some summit leaders observed the gathering had a renewed sense of unity after what Trudeau called an “interesting” period at NATO, without necessarily having to name the reason why.

It’s the first one to take place in several years without former U.S. president Donald Trump in the White House, who had called NATO “obsolete.”

“It’s different,” Stoltenberg said when asked about the dynamics of the alliance with U.S. President Joe Biden now in the room.

During his earlier meeting with Stoltenberg, Biden reinforced the importance of the U.S.’s participation in NATO, including its historical past, and North America’s commitment to its European allies.

And for the first time, the military alliance took a stand on China.

The closing position statement issued on topics discussed at the summit and endorsed by NATO leaders characterized China as a security concern that behaves assertively in an attempt to undermine the global rules-based system.

It said China had “coercive policies” and expressed concern over its growing arsenal of nuclear warheads.

“We remain concerned with China’s frequent lack of transparency and use of disinformation,” it read.

“We call on China to uphold its international commitments and to act responsibly in the international system, including in the space, cyber and maritime domains, in keeping with its role as a major power.”

The leaders did, however, agree to welcome chances to work with China on issues that impact the alliance, like fighting climate change.

That is also the position Trudeau has adopted.

He has said that to reduce greenhouse gas emissions worldwide, China needs to be included, which he believes can be done while still opposing its human rights violations and working with other allies to become a competitive economic and trade alternative.

While sitting down with Stoltenberg, Trudeau said the NATO allies “were more united than ever.”

“And it is more important than ever that we be united.”

Trudeau said nations need to stand together to fight crises from COVID-19 to climate change, which is why he said Canada stepped up to offer to become a policy hub looking at global warming’s effects on defence and security.

There’s also been a geopolitical shift, he added, with the world now seeing a general rise in authoritarianism.

He said NATO allies need to demonstrate there is an alternative to what he called the “strong arm” tactics that countries like China are taking.

He also noted Russia has been worse now in its engagement with NATO nations and more disruptive than it’s been in decades, saying in a separate appearance he sees Russia as a rival.

Trudeau later met with European leaders Charles Michel and Ursula von der Leyen, where they are expected to talk about the COVID-19 pandemic, climate change and the trade agreement between Canada and the European Union.

Trudeau’s office says he’s pitching to the European Union that Canada can be a potential supplier of critical minerals, which can be used to power electric car batteries. 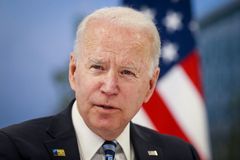 NATO looks to ‘turn the page’ with Biden visit in post-Trump summit
June 13, 2021 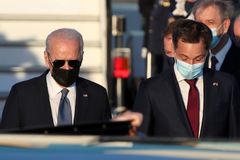 Trudeau pledges support for Ukraine, silent on support for next step in NATO membership
June 13, 2021 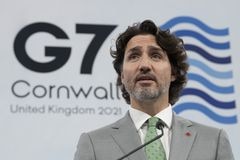