The Prime Minister’s Office says Justin Trudeau has “full confidence” in Bill Morneau to navigate Canada’s economy through the COVID-19 crisis, but did not say whether he would remain in the job after a cabinet shuffle expected in the coming weeks.

The Globe and Mail reported on Tuesday the Prime Minister is not committed to keeping Mr. Morneau as the key architect of the government’s economic revival plans after the two clashed over policy, and concerns about the minister’s involvement in the WE Charity scandal.

Facing intense media scrutiny and reaction from market analysts over whether Mr. Trudeau had lost confidence in the Finance Minister, the Prime Minister’s Office (PMO) issued a statement on Tuesday afternoon affirming its support of Mr. Morneau.

At the helm of the treasury, Bill Morneau has been left hanging

A senior government official said the PMO had to issue the statement because other media had interpreted The Globe story as meaning Mr. Morneau would be removed as finance minister when, in fact, no decision has been made.

The statement did not say Mr. Morneau would continue as finance minister if Mr. Trudeau shuffles his cabinet, as expected before the return of Parliament in September, but lauded him for his role during the coronavirus shutdown and for past economic measures, including reforms to the Canada Pension Plan.

“Since we formed government, Minister Morneau has worked relentlessly with all his colleagues, and closely with the Prime Minister, to deliver critical support for Canadians to build a strong and resilient economy,” the PMO statement said.

The Globe also reported on Tuesday that the PMO was surprised when Mr. Morneau revealed he recently repaid the WE organization about $41,000 in expenses for trips he and his family took with the charity. Senior officials told The Globe on Monday that he failed to let anyone in government know about the trips to Kenya and Ecuador in 2017. The Ethics Commissioner is investigating Mr. Morneau and Mr. Trudeau over a contract that was awarded to the charity.

The Globe is not identifying the senior officials or the other sources for this story because they were not authorized to speak publicly about Mr. Trudeau’s plans for a cabinet remake that could lead to the departure of Mr. Morneau, a Toronto businessman who was named Finance Minister in 2015.

A source who has regular contact with Mr. Morneau said on Tuesday that he and his staff were blindsided to find out Mr. Trudeau was debating the Finance Minister’s future and that the PMO has hurt his credibility at a crucial time. The relationship can’t be easily repaired unless the Prime Minister gives his personal and continued support to his Finance Minister, the source said.

On Monday, the Finance Minister’s office said Mr. Morneau has no plans to leave politics and is engaged in reviving the economy.

“Minister Morneau fully intends to keep working on the Prime Minister’s team and getting Canadians through the pandemic,” communications director Pierre-Olivier Herbert told The Globe.

Craig Alexander, chief economist of Deloitte Canada, lauded Mr. Morneau for his stewardship of the economy during the COVID-19 lockdown, but said he did not think the uncertainty over the Finance Minister’s future would rattle investor confidence in Canada.

“Mr. Morneau has done a very good job. He has been Finance Minister in a very difficult time, and the government’s response to the pandemic and the likely economic consequences was the right one,” he said. “I doubt markets are responding significantly to any of the political uncertainty at the moment.”

He said markets would wait to see if policies change.

“If the answer is that there is a change of leadership but it doesn’t suggest any change in the current government stance as the appropriate policy response to the current crisis, then markets are unlikely to to be significantly affected,” he said.

The federal government has provided $160-billion in direct COVID-19 support, and the deficit this fiscal year is projected to hit $343-billion, the largest shortfall since the Second World War.

Insiders said earlier this week that Mr. Trudeau is thinking about a possible new finance minister as he examines new stimulus and social safety net measures.

During the lockdown, the Prime Minister came to rely on Mark Carney, former governor of the Bank of England and Bank of Canada, for informal policy advice, and now on plans to revive the economy, sources said.

The sources did not deny that Mr. Carney could replace Mr. Morneau if he is interested, although he would need to win a seat in Parliament. Other contenders are Deputy Prime Minister Chrystia Freeland, Foreign Affairs Minister François-Philippe Champagne and Treasury Board President Jean-Yves Duclos, the insiders said.

The Prime Minister and Mr. Morneau disagreed over plans to move the Canada Emergency Response Benefit into a revamped and broader Employment Insurance Program, sources said. The PMO wants a two-year freeze on premiums, while Mr. Morneau prefers a one-year freeze to save money, sources said.

In the early rollout of coronavirus relief, Mr. Trudeau overruled Mr. Morneau on several important measures, including the Finance Minister’s preference for a 10-per-cent wage subsidy. The Globe reported in April that the subsidy was increased to 75 per cent under pressure from Mr. Trudeau. The Prime Minister also instructed Mr. Morneau to drop legislation that would have given the Finance Department extended taxing and spending powers until the end of 2021, sources have said. 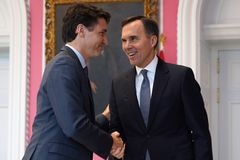 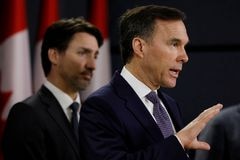 Coronavirus information
The Zero Canada Project provides resources to help you manage your health, your finances and your family life as Canada reopens.
Visit the hub
Follow Robert Fife on Twitter @RobertFife
Report an error Editorial code of conduct
Due to technical reasons, we have temporarily removed commenting from our articles. We hope to have this fixed soon. Thank you for your patience. If you are looking to give feedback on our new site, please send it along to feedback@globeandmail.com. If you want to write a letter to the editor, please forward to letters@globeandmail.com.
Comments