As Justin Trudeau took the remarkable step of announcing that he’d put federal money at stake to build an oil pipeline, he somehow managed to describe it as a “coming together” to serve the national interest.

It wasn’t, of course, a coming together. It was an assertion of control. Mr. Trudeau has jurisdiction, and no doubt believes the Trans Mountain pipeline expansion is in the national interest. But B.C. Premier John Horgan left a meeting with the PM and Alberta Premier Rachel Notley in Ottawa saying he’s still against it. Several First Nations are fighting it in the courts. There will be vociferous protests.

This wasn’t all hands joining together across the nation. It was a prime minister forging ahead in the face of opposition.

It’s this pipeline — and not any other that might be built now or in the future — that Mr. Trudeau has adopted as a linchpin to his economic and environmental agenda. His reasoning is couched in feathery public pronouncements, but it should be clear: get this one done, and Liberal carbon taxes and climate measures can fly politically, too.

That’s why, contrary to what so many believe, Mr. Trudeau has long been committed to this pipeline. Many complained he wasn’t doing enough to get it built, but TMX has been at the core of his priorities since 2016. That’s when he first risked losing B.C. seats and environmentally conscious voters by approving the TMX expansion — and another pipeline, Line 3, to boot.

Mr. Trudeau is famous for touchy-feely politics and titled his autobiography Common Ground; he has backtracked on promises like electoral reform; he took photo-op politics to embarrassing ends in India. But there is a steelier aspect to the PM, especially on things he sees as core challenges. TMX is one.

Now he’s going to lay out federal money, in partnership with the Alberta government, to backstop a Houston-based pipeline goliath, Kinder Morgan Inc. If that doesn’t wave a flag in the face of pipeline opponents, including those who voted Liberal, what will? On Sunday, Greenpeace Canada’s climate and energy campaigner, Mike Hudema, immediately issued a statement saying “the resistance continues to grow, and this pipeline isn’t going anywhere.”

The Prime Minister has a key part of the politics right, and the politics define the bounds of policy: the broad mass of Canadians from coast to coast won’t settle behind a climate policy that appears to stifle resource development, or an energy policy that ignores emissions. Mr. Trudeau can claim to have a viable start on both. The catch is that political middle ground might not be easy to hold, either.

And Mr. Trudeau’s policy definitely requires a pipeline. He made that clear, even as an opposition leader, that means a pipeline. Since 2016, that has meant TMX.

The Liberal government killed the proposed Northern Gateway pipeline to Kitimat, B.C. – it was practically doomed and Mr. Trudeau had argued its route was environmentally risky. The now-cancelled Energy East conduit to Saint John, N.B., was to come later than TMX, and had met with lots of opposition from First Nations and in Quebec. Mr. Trudeau settled on TMX as the pipeline.

It’s not pipelines, plural, either. Mr. Trudeau also approved the replacement of the existing Line 3 to Superior, but it is TMX’s promise of getting oil to tidewater that he views as key. After that, approving pipelines will get harder — at least, the Liberals have tabled legislation with a more restrictive process. It’s pretty much all on TMX.

Once that was the case, Mr. Trudeau had little choice but to put money in when Kinder Morgan expressed qualms about the risk from the B.C. government’s opposition. He had approved it, worked out the former provincial government’s concerns. Letting it fall to Mr. Horgan’s opposition would shake investor confidence. There wasn’t, as some suggest, another simple step that would guarantee construction will go ahead.

But risking federal money won’t even placate pipeline advocates. If TMX goes over budget, or off course financially, Mr. Trudeau will own it, politically. But he already does. On Sunday, he closed his press conference by arguing building a pipeline goes with pricing carbon. He placed his bet on TMX long ago. 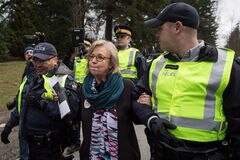 Opinion
It may be time for Trudeau to buy in on Trans Mountain
April 13, 2018 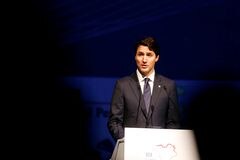