There was more than one message in Justin Trudeau’s call for the barricades to come down. One was that the government was losing patience, and that there soon would be action. The other was that Indigenous leaders now had a last chance to intervene to persuade protesters to end the blockades, and that public support for reconciliation was on the line.

That second message was Mr. Trudeau’s last faint hope at having Indigenous communities end the blockades before police step in. The government has always been concerned that that could make things worse, sparking violence or more blockades, the Prime Minister acknowledged. Now, he was making a direct appeal to Indigenous leaders to not let that happen.

A Prime Minister who had always declared Canada’s relationship with Indigenous peoples to be its most important was putting the onus on Indigenous leaders to save it. That could just as easily backfire as succeed.

At Friday’s news conference, Mr. Trudeau went out of his way to distinguish between Indigenous and non-Indigenous protesters, between those, he said, who had a legitimate, historic grievance for being marginalized, and those who have a current disagreement. He indicated that sentiment about the blockade is mixed in First Nations such as Tyendinaga and Kahnawake.

That was a way of saying to Indigenous communities across the country that their political agenda was being taken over and steered in ways they don’t really want. It amounted to arguing that it is up to chiefs to defuse the protests.

It isn’t at all clear that anything like that will happen. On Tuesday, Grand Chief Serge Otsi Simon of the Kanesetake Mohawk Grand Council pleaded with protesters to pause the blockades as a sign of good faith, warning that it could set back relations between Ottawa and First Nations, and delay Canada’s adoption of the United Nations Declaration on the Rights of Indigenous Peoples. On Wednesday, after complaints from within his community, Mr. Simon retracted his call for the blockades to come down.

And Mr. Trudeau’s suggestion on Friday that the onus is on Indigenous leaders to save reconciliation could spark a backlash.

Politically, the Prime Minister clearly decided that his reconciliation agenda was at risk. Liberal MPs had been saying that their constituents were talking about nothing but the blockades, and demanding to know why the government wasn’t doing something to end it. Some of those MPs figured that voters would forget about it if it ended soon, but not if it dragged on and on.

Complaints that the rail blockades are causing real harm are growing, too. A thousand rail workers were laid off. Shipments were blocked. Busy commuter trains from Montreal suburbs have been cancelled. There are fears that supplies of propane, used to heat large numbers of homes in rural areas of Ontario and Quebec, would run out within weeks.

So Mr. Trudeau signalled that his patience had run out – and that blockades must come down.

On Friday, Mr. Trudeau argued that he had done all he could to find a peaceful resolution – offered dialogue, dispatched ministers. And while he insisted that he had nothing to do with getting the RCMP to pull out of the Wet’suwet’en territory in British Columbia – politicians don’t tell police what to do, he said – he noted that the retreat fulfilled a key condition set by Wet’suwet’en hereditary chiefs. And still, he said, there was no reply. “We can’t have a dialogue when only one party is coming to the table,” he said.

Whatever the debates about whether he has done the right thing, there isn’t much doubt about the political message Mr. Trudeau received: that he couldn’t wait much longer.

Mr. Trudeau was right, in his speech on Tuesday when he adopted a much more conciliatory tone, when he said that this is a critical moment. His statement Friday that talks are going nowhere sets the clock ticking toward police intervention that could lead to violence or broader protests. He argued that continuing blockades will undermine public support for reconciliation, in effect warning that the impact will be long-lasting.

Mr. Trudeau clearly decided that he not only had no choice but to take that risk, and gamble a big chunk of the Trudeau brand, he also explicitly laid relations with Indigenous people on the line.

‘Day 16: Justin Trudeau just made the speech that he should have made weeks ago.’ Readers reflect on the week in pipeline protests and blockades across Canada
February 21, 2020 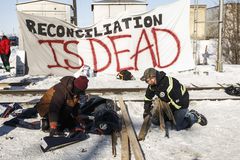 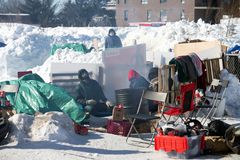 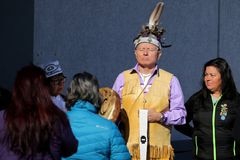