With less than a month to go before the Oct. 21 federal election, Mr. Trudeau’s party is trying to close the book on a scandal that threatens to throw the Liberal Party’s re-election bid off course. But since three instances of Mr. Trudeau wearing blackface were published last week, key details about the controversy remain unanswered, including how often Mr. Trudeau wore blackface and when he stopped doing so.

The cases have all been reported on since Wednesday, garnering international media headlines and making Mr. Trudeau a target on the late-night comedy circuit. The examples of him taking part in the practice that mocks racial minorities span from the late 1980s to 2001.

Previously Mr. Trudeau has said he’s “wary” of being definitive about how many times he wore blackface because he hadn’t remembered one of the cases reported on by Global News from the 1990s. Mr. Trudeau was asked at a campaign stop in Brampton Sunday whether he could say with certainty that he hasn’t worn blackface since 2001.

John English: We should judge all prime ministers by their present behaviour, not their past mistakes

“I’ve been very clear with Canadians on this issue over the past number of days," Mr. Trudeau said while not answering the question and pivoting to an attack on the Conservative Party’s policy priorities.

The case is still garnering attention from around the world with the British-based Telegraph newspaper publishing more details Saturday about how party guests responded to Mr. Trudeau’s appearance in blackface at the Arabian Nights-themed gala hosted in 2001 by the private school in Vancouver where he was a teacher. Guests at the West Point Grey Academy gala who spoke with The Globe and Mail last week suggested they weren’t offended by his costume, which featured his face, neck and hands painted dark and a turban and robes.

Mr. Trudeau had a relatively quiet day of campaigning Sunday in the Greater Toronto Area after a down day Saturday. He was greeted by a small crowd at a suburban house in Brampton where he announced billions in tax cuts and a plan to cut cellphone bills. He hasn’t held a major rally since the controversy broke. But he was greeted by a big crowd of supporters from multiple ridings as he arrived at his hotel in Hamilton Sunday evening.

NDP Leader Jagmeet Singh, a turbaned Sikh, has focused his comments about the blackface images on the racism they instill and the hurt they cause for racial minorities who are regularly discriminated against because of the colour of their skin.

Mr. Trudeau said last week he would apologize directly to Mr. Singh, but the two have not yet spoken. Mr. Singh has said he will only speak with Mr. Trudeau if it’s not used to give the Liberal Leader political cover and if the conversation is kept private. The NDP said it is still waiting to hear back from the Liberals to schedule a meeting.

Conservative Leader Andrew Scheer said Sunday that the blackface story involving Mr. Trudeau has “reignited or brought to the forefront” discussions on discrimination but he didn’t provide any specific policy ideas. 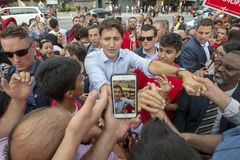 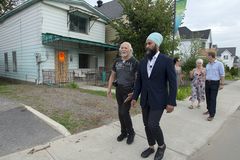