Prime Minister Justin Trudeau says the federal election campaign is not interfering with the government’s ability to manage the crisis in Afghanistan where tens of thousands of former Afghan allies are crowded outside the Kabul airport, hoping to board evacuation flights.

At a news conference announcing a Liberal housing policy in Hamilton Tuesday, Mr. Trudeau was asked if he had any regrets about calling the snap election on the day that Kabul fell to the Taliban. He was also pressed to explain how can he can properly deal with the refugee crisis when he is spending most of his time on the campaign trail.

“The business of government continues. I get updates every single day on the situation in Afghanistan,” he replied.

Mr. Trudeau argued the election was called now because he believes Canadians want to know which political party has the best policies to get through the pandemic and revive the economy.

Mr. Trudeau is participating on Tuesday in G7 virtual summit of leaders from the United States, United Kingdom, Germany, France, Italy and Japan. The leaders plan to discuss how Western powers can evacuate more people from Afghanistan and measures to hold the Taliban to account if they commit human rights abuses, he said.

Mr. Trudeau said Canada and other allies are also looking at how humanitarian aid can be delivered to the Afghan people without the money ending up in the hands of the the country’s new hardline Islamic rulers.

“Obviously with the Taliban in control of the country, our regular aid, investments in aid agencies need to be looked at carefully to make sure we are not supporting indirectly the Taliban,” he said.

Canadian expats and Afghans trying to gain access to evacuation flights out of Kabul say they can’t find Canadian soldiers at the city’s airport and aren’t getting sufficient information from federal officials in Ottawa.

Complaints about a slow and ineffective Canadian response contradict assurances from government ministers and federal officials that everything possible is being done to assist Canadian citizens on the ground in Afghanistan, as well as Afghan nationals who are connected to Canada because they or their family members worked as support staff for the country’s military or diplomats. The situation in Kabul has grown increasingly chaotic over the past week as the Taliban have consolidated their control over the city.

Defence Minister Harjit Sajjan told reporters on Sunday that Canadian Armed Forces personnel are posted at each of the security gates at Kabul’s Hamid Karzai International Airport. In a briefing Monday, military officials said that Canadian special forces soldiers are working outside the airport’s security perimeter, helping eligible evacuees make it through.

But The Globe and Mail spoke by WhatsApp on Monday with an Afghan-Canadian who has spent the past three nights outside the airport with his wife, two young children, stepdaughter and five other family members.

Abdul Hadi Yusufi said the airport gates are staffed by U.S. soldiers, who would not allow him inside the perimeter, even though he showed them his Canadian passport. There were no Canadian soldiers at any of the gates, he said.

“They [the Americans] looked at my passport and I waved it at them, and they told me, ‘No, just go away,’” he said. “The Canadians are inside the perimeter of the airport. They are not at the outside. We have no contact with them.”

Mr. Yusufi said his wife is an Afghan police officer and that her life would be in grave danger if the Taliban were to arrest her. “If she is caught, she will be butchered in no time.”

Horeya Mosavi, who is Mr. Yusufi’s niece and lives in Edmonton, said she contacted a Global Affairs emergency hotline for Afghanistan on Monday. She was told her uncle had to figure out how to get into the airport on his own.

“The lady on the line said if he is able to get inside the airport, they can help him. If he can’t, then they are not able to help him,” Ms. Mosavi said.

Tens of thousands of people have thronged the airport perimeter. Photographs and videos shared on social media show many standing in waist-deep water, holding smartphones and identification documents as they wait in hopes of catching a flight out.

Sally Armstrong, a journalist and an advocate for Afghan women, said she has been receiving dozens of pleas for help from Afghans each day. “These are legitimate refugees, people who worked for companies funded by Canada. They file the application and don’t hear back,” Ms. Armstrong said.

She said she has been trying to help a former support staffer get on a flight, but he has only received exit visas from Immigration, Refugees and Citizenship Canada for three of his five family members. He’s afraid to proceed without exit visas for the entire family, Ms. Armstrong said, and is trying to decide whether to risk the journey to the airport with small children or stay and hide from the Taliban.

“Someone in the government needs to get off the election trail and deal with an organizational problem at Immigration,” Ms. Armstrong said.

Jasteena Dhillon, a lawyer and law professor at Humber College who worked in Afghanistan for four years, has been helping Afghans evacuate. She said she has not seen evidence that Canada has made arrangements to assist Afghans with reaching the airport.

“Why are the Canadians having to go straight to the airport and confront the Taliban at checkpoints when other countries are sending military transports or buses that zoom through town and cut through the checkpoints?” she said.

The Canadian military has airlifted five flights of evacuees since Aug. 19, after U.S. troops secured the airport. The most recent Canadian flight for which Ottawa has provided information left Kabul on Sunday, carrying 436 Afghans. Some of the Afghan passengers flown out since Aug. 19 are destined for countries other than Canada, because Canada is pooling its evacuation efforts with allies. 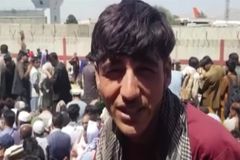