In the spirit of co-operation, Justin Trudeau invited all parties to work on his Liberal agenda.

The re-elected Prime Minister’s first postelection news conference set a clear tone about how he intends to approach minority government. There will be consultation and efforts to emphasize things that others have in common with his government. But it will be Mr. Trudeau’s agenda.

His large minority, and the weak position of the opposition, at least for now, give him an upper hand, even if he is a little shy of votes in Parliament. It is clear Mr. Trudeau intends to govern that way.

There was one note of recognition – that he needs to bring in regional voices to deal with the frustrations of many in Alberta and Saskatchewan, where the energy sector is still struggling. But it was about bringing voices into his Liberal government. And minority or not, it will be a completely Liberal government.

Unsurprisingly, Mr. Trudeau ruled out a formal coalition with any other party. But he also dismissed informal coalitions. He will stay in power by looking for support from one party or another on a vote-by-vote basis. He’d work with the Bloc Québécois, for example, on issues such as fighting climate change.

The immediate plans he outlined were the big chunks of the Liberal agenda. The first thing to be done when the House of Commons convenes – date TBA – is to pass the broad tax cut promised in the Liberal platform. He promised the Trans Mountain pipeline expansion would go ahead.

What message did he get from voters who cut his Liberals down to a minority from the majority won in 2015? That Canadians expect their leader to work together on big issues, and notably should focus on “affordability and fighting climate change.”

“Fortunately,” he said, without a hint of irony, “those are big parts of our platform.” He added he’d work with other parties “to ensure we are making the right decisions for all Canadians.” In case anyone didn’t catch the second-term priorities, he repeated them: affordability and fighting climate change.

Certainly, there was outreach. After Monday’s election, there were clear regional tensions. By Wednesday afternoon, Mr. Trudeau had spoken to every premier of a province or territory, except the Northwest Territories, where the premier is in the process of being chosen. He had a mend-the-fences call with Ontario Premier Doug Ford, his favourite Tory target during the election campaign. But in Wednesday’s news conference, he emphasized co-operation in areas where the premiers share common ground with him.

There are 32 Bloc Québécois MPs in the Commons, claiming to speak for the agenda of Quebec Premier François Legault, who had laid out four demands, including more powers over immigration and an assurance that Ottawa will not contest Quebec’s Bill 21, which bars many public-sector workers from wearing religious symbols. But Mr. Trudeau said he had spoken to Mr. Legault about areas where they can work together such as infrastructure and housing.

There is clearly one area, however, where Mr. Trudeau acknowledged the Liberals need something more, even if he couldn’t say what: addressing frustrations felt in the oil patch of Alberta and Saskatchewan.

That’s why he was also on the phone to the mayors of Calgary, Edmonton and Saskatoon. Mr. Trudeau’s team expect opposition, not advice, from Alberta Premier Jason Kenney and Saskatchewan Premier Scott Moe, so they turned to the mayors.

The quick reassurance that the pipeline expansion will go ahead might ease some tensions, but there was also a tacit acknowledgement that won’t be enough. Mr. Trudeau declared climate change a second-term priority, but he must also search for some way to soothe the frustrations of ordinary workers in the energy sector, too, and bring in someone who will somehow serve as a regional representative.

That’s all an effort to right the ship, though, not to share the helm. Mr. Trudeau the minority PM signalled he had recommitted the listening and wants co-operation – but the governing agenda is his.

Trudeau says he has no plans to establish formal coalition in first public comments since election Subscriber content
October 23, 2019 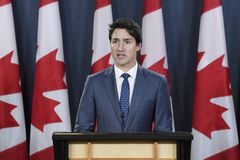