The three major federal parties are so hungry for a win in a looming by-election in Quebec that all three leaders will be bumping into each other at the same local event on the same day.

Prime Minister Justin Trudeau, Conservative Leader Andrew Scheer and NDP Leader Jagmeet Singh are all scheduled to attend the lunchtime start of a 1,000-kilometre cycling marathon that is expected to draw a large crowd.

Chicoutimi-Le Fjord is a swing riding located in the nationalist Saguenay region of Quebec. Over the past two decades, voters there have elected Liberal, NDP, Bloc Québécois and Conservative MPs.

According to a Segma telephone poll of 402 respondents, Conservative candidate Richard Martel has a strong lead in the by-election at 48.5 per cent support. Liberal candidate Lina Boivin is in second place with 26.7 per cent, followed by Bloc Québécois candidate Catherine Bouchard-Tremblay (11.7 per cent) and NDP candidate Eric Dubois (8.3 per cent).

The poll was conducted for a local newspaper and television station between June 7 and 12, and has a margin of error of 4.9 percentage points.

Mr. Martel benefits from widespread name recognition in the area, having long coached the local junior hockey team. In addition, he has been campaigning in the riding since last year, which has given him a considerable advantage over Ms. Boivin, who was nominated n style="font-size: 0.875rem;">only last month.

The Liberals are hoping to benefit from a “Trump bump” in the June 18 vote, pointing out Mr. Trudeau has received considerable support for standing up to U.S. President Donald Trump at the recent G7 summit in nearby Charlevoix.

There is a strong aluminum industry in Chicoutimi-Le Fjord, and Mr. Trudeau will continue to tout his support for Canadian workers against the recently-imposed U.S. tariffs on steel and aluminum. He will be accompanied by his wife, Sophie Grégoire Trudeau, for his day of campaigning.

Mr. Scheer, meanwhile, will be working the riding alongside two of his MPs from Quebec, Alain Rayes and Luc Berthold, as well as former Bloc Québécois House Leader Michel Gauthier.

Conservatives think they have a unique opportunity to rally the anti-Liberal and anti-Trudeau vote in Quebec, given the falling fortunes of two other major parties in the province. Beset by leadership problems, the Bloc is facing another existential crisis. Meanwhile, the NDP is struggling to maintain its position as a major federal presence in Quebec under the leadership of former Ontario MPP Jagmeet Singh.

Mr. Gauthier, who spent 14 years in the House, is the perfect symbol of Mr. Scheer’s strategy in Quebec, where the party is working to recreate the “blue” coalition of nationalists and conservatives that regularly comes together in the province. While Mr. Gauthier is no longer working to achieve sovereignty, his fight against the Liberal Party lives on.

“I am calling on sovereigntists who used to vote for the Bloc Québécois to turn their support to the Conservative Party,” said the 68-year-old. “Mr. Scheer is a new leader with a new team who is putting together a new program, he is very open to Quebec and he seems to me to be someone who would make a very good prime minister.”

The Liberal MP who was elected in Chicoutimi-Le Fjord in the last election, Denis Lemieux, resigned last year. The Conservatives finished in fourth place in the riding in 2015, behind the Bloc and the NDP, which had held the seat from 2011 to 2015. 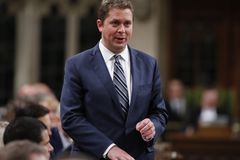